Home | India | Top Headlines | All that glitters is just a distraction

All that glitters is just a distraction

If you are liberal and lazy, clap your hands. But then if you are truly liberal and lazy, you would be too lazy to applaud. Instead, you’d be surprised to discover a new fanaticism for the week, then post your dismay on social media or, if you have enough right, in a weekend column in mainstream media, and cook in your own juices until the next. The fanaticism of the week knocks on the door. 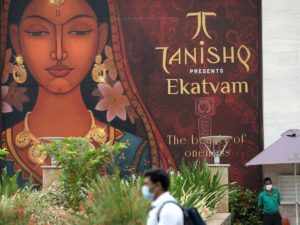 This week, it was an advertisement for Tanishq whose goal was to sell her jewelry. It turns out that, like Fifty Shades of Gray somehow making its way into a school library, the ad hit the wrong target customer: conservative Hindus who don’t like the idea of ​​their beta-betis marrying. Muslim at all, something the jewelry brand sought to promote while making its sales pitch.

Social media, such as sex chat rooms and WhatsApp groups, magically empowers shy and timid souls by providing them with a cover of anonymity. So while the notion of interfaith marriage, and the idea of ​​an advertisement extolling it, horrifies many (you don’t have to be a troll to be conservative), infuriated about it in apoplectic terms like ‘love jihad’ etc. little more than a counter-campaign to a warm and diffuse ad campaign, both of which are amplified on social media and then on “non-social” media. And when outrage in the ether of social media breaks into the real world in the way that some people stormed a showroom in Gujarat, demanding a note of ‘apology to the Hindu community’ on behalf of the store that is installed and then removed. , we have an anklet turned into a broken ankle, a necklace turned into a strangled neck.

The liberal outrage against illiberal bile is justified. But it follows a certain well-established playbook at the center of which lies massive distraction. In the larger scheme of things, the subject of interfaith marriage and its discontent is a frisbee in the park. As is Tanishq’s decision to react to “business concern” by removing the ad. Your business, your decision, especially when the job of advertising your brand has gone far beyond the scope of the commissioned ad, thanks to literally free agents.

All that glitters may not be gold, but it can certainly be distracting if distraction is the need of the moment. The country, as far as one can tell, is not being invaded by either Hindu-Muslim nuptials or Hindu inbreeding along the lines of Rajkumar Kohli’s 1979 classic ‘horror-romance’, Jaani Dushman. One can safely presume (sic) that job losses, pay cuts, family income drop, return to schools and Covid death apart, matters like law and order as shown in the management of rape and overcoming political violence in elections are more worrying issues. As time goes by, even the launch of the Bollywood saga with Manali hash tags scores on this ad for tinsel products.

Liberal laziness, unfortunately, does not seem to give the Tanishq episode its due importance. A trading company that receives negative and negative feedback from customers due to unpleasant and narrow-minded reasons is not exactly the advent of intolerance. That circus came to town and set up its tent a while ago.

But by giving this episode runts ranting on social media and venting their pent-up fantasies about customer penetration and brand infidelity, so bhao, those who denounce the repressed neurotics are feeding these ferrets and getting fat with a cause, however, stupid and unfair. and against the law (Special Law of Marriages, 1954) your foaming.com can be. Instead of starting, say, a #MarryAMuslim campaign, or invoking ‘secular India’ to ears that, like Maharashtra Governor BS Koshiyari’s peers, consider the word ‘secular’ to mean something sinister, liberals should use what its dominance weakness has generally been considered. : sloth.
Liberals, whether left, right or center, do not usually break in to place advertisements in store windows, attack bastions of anti-liberalism or intolerance, proactively seek the removal of copies of Mein Kampfs or the Little One. Red Book of bookstores, nor protest. exteriors and property damage to cinemas showing Kangana Ranaut films. This culture of ‘boycotting’ over ‘removing’ fundamentally skews the issue in favor of the more active, more pointed ‘stubborn’, especially when they are used by administrations as off-leash dog show attack dogs leading administrations.

But, to cite the advice of a well-known radical conservative to democratic nations, liberals in India must try to find ways to starve the figurative terrorist and hijacker of the publicity oxygen they depend on. With the art and science of opposition largely in the doghouse these days, knowing what are problems and what are not problems and then letting the latter lie is a solid strategy. Tanishq, it can be safely assumed, can deal with its own pre-Diwali hype and sales, especially in these days of busiest online business.