What Hindutva trolls can learn from Gandhi

I am used to abusing BJP trolls. But they seemed especially abusive when I wrote last week that the new Ram temple that opened in Ayodhya would eventually turn out to be a minor event with little political consequence. I said that India already had hundreds of thousands of temples and one more in Ayodhya would make a little difference. The trolls criticized this as the delusional delirium of a “failing” “atheist” “libtard” who knew nothing of Hinduism. 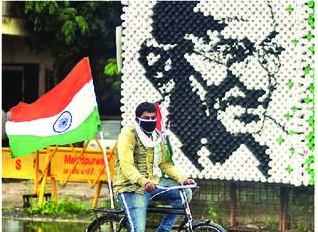 In response, allow me to introduce my mother. She spent the last two decades of her life at the Sivananda Ashram in Rishikesh and became a sannyasin. She was a devout Hindu. But would she have approved of the mob that destroyed Babri Masjid in 1992? No, I would have called them thugs, a disgrace to all that is good and great about Hinduism.

The media has taken the Ram temple bhoomi pujan as an important event for all Hindus. Sorry, but it is an event for Hindutva, not for Hinduism. My mother would have questioned the mega publicity given to the new Ayodhya temple. For the vast majority of Hindus, the new temple will matter much less than the local temples and will not be able to compete with large Hindu centers of worship such as Tirupati, Varanasi, Thanjavur, Badrinath, Puri, Vaishno Devi or Shirdi.
My mother would have described the building of temples as a commendable Hindu act that the communities did in each village. My father built a Ganesh temple in New Delhi. Did this have something to do with politics or politicians, or with the rejection of another religion? Absolutely not. During the 1947 Partition riots, our family was in Shimla. A Muslim family ran into our house chased by a Hindu mob. My mother quickly locked the Muslims in the attic and let the Hindu mob rampage through the house in vain. Who represented the devout Hindu, my mother or the Hindu mob?

My mother would have preferred it to be deeply religious, but she smiled indulgently at my atheism and said that there were atheistic traditions like the Charvaka school of philosophy within Hinduism. The Hindutva trolls seem blissfully unaware of this. Still, they care less about atheists, who are small in number, than they do about secularists, constantly claiming that secularism is anti-Hindu or implies disparaging Hinduism. That is pure tripe.

Mahatma Gandhi was undoubtedly a devout Hindu. He was also a fundamental secularist and saw absolutely no contradiction between the two. He said that people called God by many names and that is why they claimed to have different religions, but they all prayed to the same Saint. This was the basis for their secularism and belief that all religions should be treated with the same respect. Secularism was not a lack of respect for Hinduism, but a respect for all.

Gandhiji also believed in inalienable individual rights and in the duty to respect the beliefs of others and not impose his opinions on them. Therefore, he supported the slaughter of cows by non-Hindus. Despite being a devout Hindu who held a daily prayer meeting, Nathuram Godse shot him for being too secular. His last words were “Hey Ram”. Was he a sick libtard?

Today, the Hindutva crowd claims that she alone represents true Hinduism. She cannot bear Gandhiji’s secularism and worships Godse. Pragya Thakur, a BJP Member of Parliament, on trial for killing 10 people in the Malegaon bomb blasts in 2008, has praised Godse as a great patriot. She was criticized and disciplined for this by Modi. However, the Hindutva crowd has been encouraged to erect many statues of Godse and made him a deity in a Hindu temple in Gwalior. Yogi Adityanath has proposed to change the name of Meerut to the city of Godse.

I just looked up the list of Indian atheists from Wikipedia. I was amused to find that the list included both myself and Vinayak Damodar Savarkar, the founder of Hindutva! Savarkar strongly opposed traditional Hindu beliefs and saw Hindutva as a political-cultural project rather than a religious one. He hated Muslims. In some speeches he called himself an atheist, although more correctly he rejected the old Sanatan Dharma and sought a major modernization of Hinduism. He said there was nothing sacred about cows and advised Hindus to give up vegetarianism. Savarkar’s biographer Dhananjay Keer notes that when his wife died, despite pleas from his followers, he refused to allow any Hindu rituals. I wish the Hindutva trolls would highlight this.

Modi and Oli speak for the first time after the Nepal map controversy, but the border issue does not come up | India News