NEW DELHI: Prime Minister Narendra Modi on Saturday raised concerns about the increasing number of Covid-19 cases in the capital. At a high-level review meeting called to discuss the national coronavirus situation and attended by senior ministers and senior officials, Modi said it was important to get the capital back on track and come up with a plan to contain the spike.

The sources said Modi felt it was necessary to come up with a plan to curb and stop the spread of Covid in Delhi so that the medical facilities were not overwhelmed. There was a sense of urgency given the importance of the capital in economic and political terms.

The meeting on Sunday that Shah will convene aims to bring together all relevant authorities and develop measures that will keep all scenarios in light of projections for the next two months. It comes after LG created an expert committee to guide city authorities and after highly critical comments by the Supreme Court and Delhi High Court on the situation in the capital. 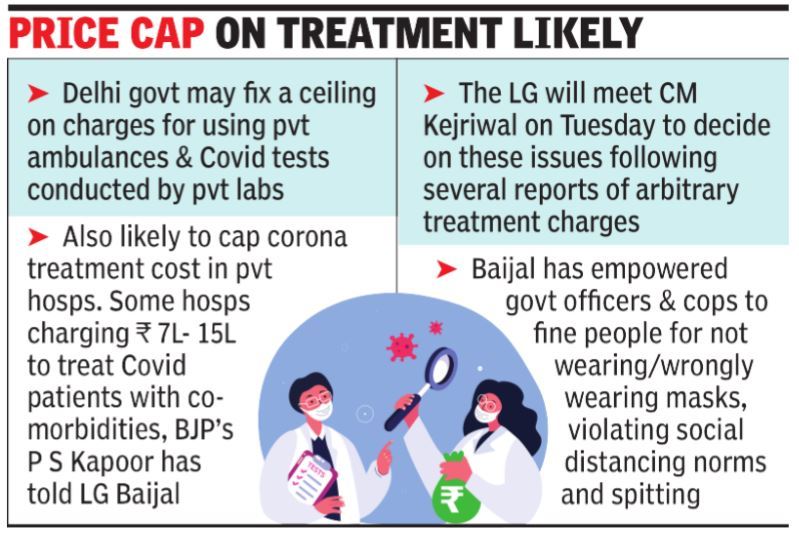 Modi suggested that Shah and Health Minister Harsh Vardhan meet with the LG and the Delhi CM in the presence of senior officials from the Center, the Delhi government and municipal corporations to plan a coordinated and comprehensive response to handle the challenge. raised by the growing cases of Covid-19. Shah will meet separately with the municipal heads on Sunday night.

Sources said the meetings to be chaired by Shah will discuss the full range of issues related to the pandemic in Delhi: the current situation and projections for the near future, measures to address the growing cases by increasing health infrastructure and new containment strategies. A tweet from the official statement by the interior minister said on Saturday that his meeting with Delhi LG and the prime minister, to be held at 11 a.m., will be attended by AIIMS director Randeep Guleria.

The Center’s review of the Delhi situation comes days after the Delhi LG reversed two decisions by the Kejriwal government about treating only bona fide residents of the city in Delhi government hospitals, as well as suspending evidence of asymptomatic contacts of Covid-19 positive people. In addition, the Supreme Court on Friday made adverse remarks regarding “pathetic” conditions in Delhi government hospitals, low daily tests, inadequate treatment of patients with Covid-19, “unworthy” handling of bodies and denial of wages to doctors and health workers.

On Friday, Delhi’s LG established an expert committee to suggest measures to increase the city’s health infrastructure. According to the Delhi government’s own assessment, the capital would see an increase in cases that could reach 5.5 lakh in late July and would require approximately 80,000 additional hospital beds.

Of the total Covid-19 cases so far, two-thirds are in five states with an overwhelming proportion of cases in major cities such as Mumbai, Delhi and Chennai.

Meanwhile, the Delhi government ruled out the reimposition of the blockade in light of the growing Covid-19 cases.