NEW DELHI: The number of coronavirus cases in India crossed the 1-lakh mark on Tuesday, nearly four months after the country reported its first Covid-19 infection. However, compared to some of the severely affected nations, India’s growth rate of Covid-19 has been much slower.

It took 64 days for the number of coronavirus cases to rise from 100 to 100,000 in India, according to data compiled by the ministry of health and family welfare and worldometer.info.

The data shows that India, which imposed a strict blockade on March 25 when it had just over 600 cases, has performed relatively well in slowing down the spread of the virus compared to countries like the United States, the United Kingdom, Italy, Spain, France and Germany. . 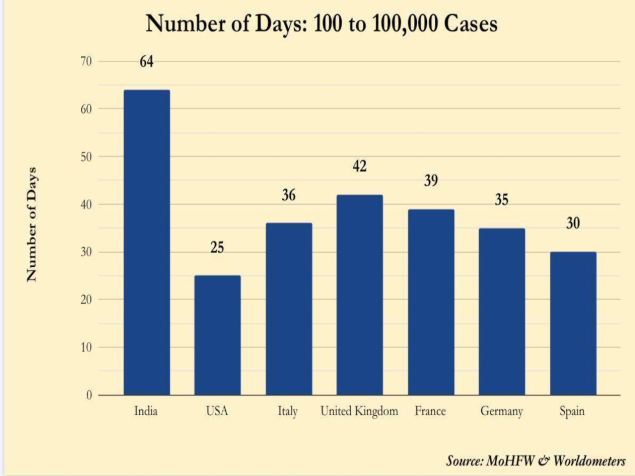 In the United States, the country with the highest number of cases in the world, it took 25 days for infections to grow from 100 to 100,000 cases. The country has reported more than 1.4 million so far, with an average of around 431 infections per lakh population.

Italy, which has reported the highest number of Covid-19 deaths in Europe, saw its Covid-19 count drop from 100 to 1 lakh in 36 days. It currently has 2.24,760 cases, with an average of 372 infections per lakh population.

Similarly, the UK crossed the lakh mark after registering 100 cases in 42 days. So far, the country has reported 2,40,165 cases, with an average of 361 infections per lakh population.

In Spain, it took 30 days for cases to increase from 100 to 1 lakh. The European nation has been the second most affected nation in Europe after Italy and has registered 2.30,698 Covid-19 infections, representing around 494 cases per lakh population.

According to WHO data, as of Monday, more than 4.5 million cases of Covid-19 have been reported worldwide, representing about 60 cases per lakh population.