BHUBANESWAR: A new bulletin from the Indian Department of Meteorology issued on Saturday at 8.45 a.m. He said the depression over southeast Bay of Bengal is very likely to intensify rapidly into a cyclonic storm on Saturday night and develop into a severe cyclonic storm for the next 24 hours.

At 5.30 in the morning, the depression was centered near latitude 10.4 ° N and longitude 87.0 ° E, approximately 1,100 km south of Paradip in Odisha and 1,250 km south of Digha (West Bengal) and 1,330 km south -Southwestern Khepupara (Bangladesh). It will most likely move north-northwest initially until May 17 and then curl north-northeast again across the northwest bay of Bengal to the west coast of Bengal during May 18-20. 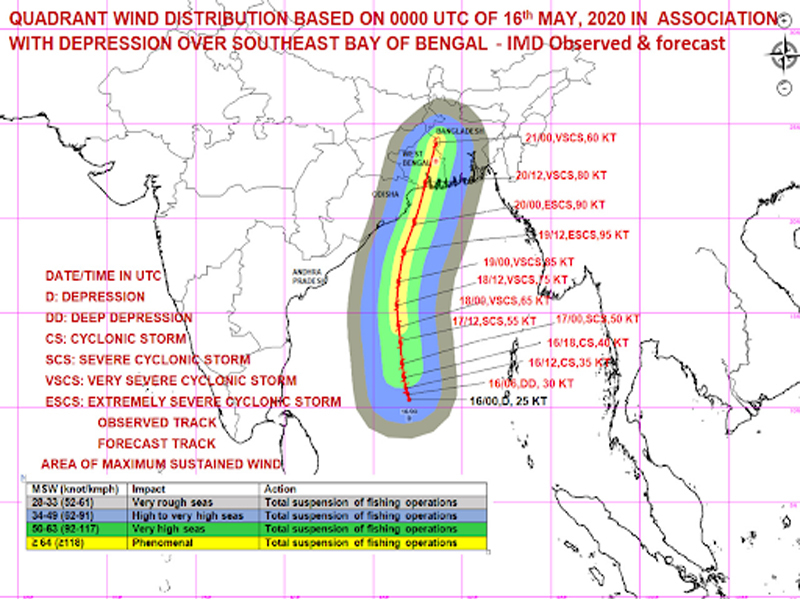 Depression to intensify in a cyclone today

The weather forecast indicates that the wind speed between 45 and 55 km / h with gusts at 65 km / h is likely to be the length and breadth of the Odisha coast as of May 19 morning and at along the West Bengal coast beginning May 19 in the afternoon. The wind speed will gradually increase and become a hurricane force wind speed that will reach 65-75 km / h from May 20 along Odisha and the west coast of Bengal. It will gradually increase thereafter.

The government advised fishermen not to venture out to sea and those already in the sea to return on Sunday.