In its first installment on Wednesday, Sitharaman had announced Rs 3 lakh crore automatic unsecured loans for companies, including MSMEs, as well as the Rs 30,000 crore liquidity facility for NBFC, among other measures.

Here are the key points from the direction of the finance ministers:

* The government extends an additional Rs 30 billion rupees of emergency credit through NABARD to farmers and around 3 billion will benefit from this. This is beyond the Rs 90 billion rupees that NABARD will provide via the normal refinance route this year. 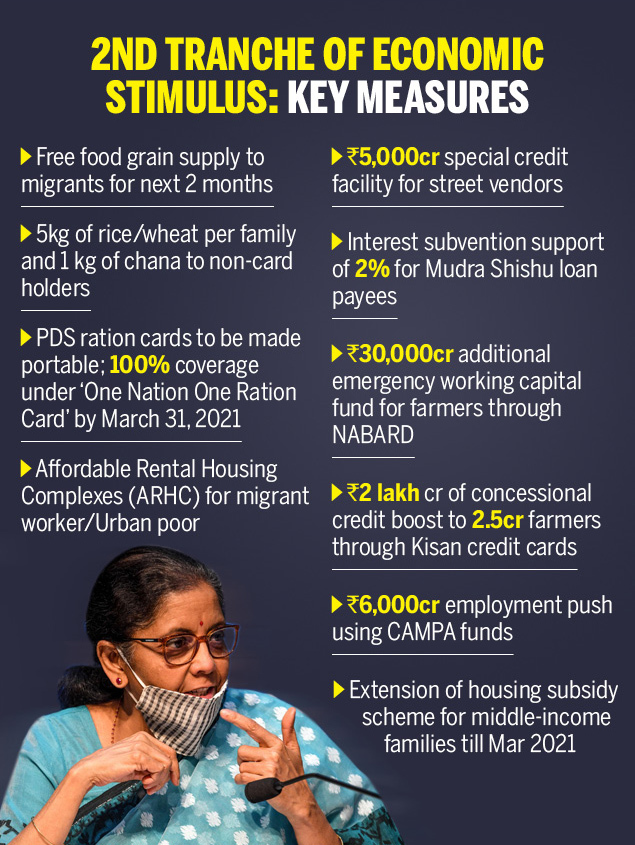 * The Center will provide Rs 2 lakh crore of concessional credit through Kisan credit cards to approximately 2.5 million farmers. The special push will take place for PM-Kisan beneficiaries, fishermen and ranchers.

* The center will supply free food grains to all migrants for the next 2 months. Those who do not have cards (migrants without NFSA or beneficiaries of state cards) will receive 5 kg of rice / wheat and 1 kg of
chana per family for two months.

This will benefit some 8 million million migrants and the central government will bear the total cost of 3.5 billion rupees.

* Publicly distributed ration cards can be used at any ration store, regardless of state. A ‘One Nation and One Ration Card’ will be implemented and we guarantee 100% of the national portability of these cards by March 31, 2021.

* We have already generated 14.62 million million person-days of work until May 13, which represents 40-50% more registered people compared to last May. Migrant workers returning to their states are actively being enrolled in MGNREGA.

* A special loan of Rs 5 billion has been granted to street vendors. They will be provided with an initial working capital of Rs 10,000.

* Digital payments will be incentivized for street vendors through monetary rewards and enhanced working capital credit.

* We wish to give lower strata of the middle class group earning up to Rs 6 to Rs 18 lakh of annual income. The government introduced a credit-linked subsidy scheme (CLSS) in 2017 and was due to end in March 2020, it is being extended until March 2021 and, in addition to the 3.3 lakh families that have benefited so far, other people from 2.5 lakh can benefit from This affordable housing scheme. This will stimulate job creation as demand for steel and construction materials increases.

* 2% interest grant support for those who have availed loans under the Mudra Shishu loan (Rs 50,000 or less) will be awarded after the 3 month moratorium period ends. It will benefit more than 3 million people in the shishu category.

* The government has allowed state governments to use SDRF to establish shelters for migrants and provide them with food and water. We are aware, we are serving migrants and giving them in different ways.

* For the creation of job opportunities in urban, semi-urban and rural areas, funds will be established from the Replanting Planning and Management Authority (CAMPA) of Rs 6,000 crore under the Forestry Compensation Fund, Law 2016.

* Rs 10 billion has been spent in the past two months creating 14.62 million man-days of work under the Mahatma Gandhi National Rural Employment Guarantee Scheme (MGNREGS) to assist migrant workers. 2.33 million people seeking wages have been offered until May 13.

* The farmer loan interest subsidy and immediate repayment incentives for loans for crops past due from March 1 have been extended to May 31, 2020.

* 25 lakh new Kisan credit cards have been sanctioned with a loan limit of Rs 25,000 crore.

* We are proposing a minimum national wage rate so that a uniform wage rate prevails in all states. Currently, minimum wages apply only to 30 percent of workers.

* The government has also proposed issuing appointment letters to all workers to promote formalization and annual health checks for all employees.

* We want to extend ESIC benefits to all establishments, especially those with less than 10 employees.

* The government is not sitting down, doing things for those on the sidelines.

* Among the 9 measures: 3 are related to migrant workers, 1 for street vendors, small merchants, independent workers, 2 for small farmers, 1 for housing.