NEW DELHI: Prime Minister Narendra Modi indicated steps would be followed to open up the economy in line with the relaxations announced so far, even as efforts to reduce the incidence of Covid-19 continue rapidly and social distancing rules are followed.

“We have a double challenge: reduce the rate of disease transmission and gradually increase public activity, while complying with all the guidelines,” he said. 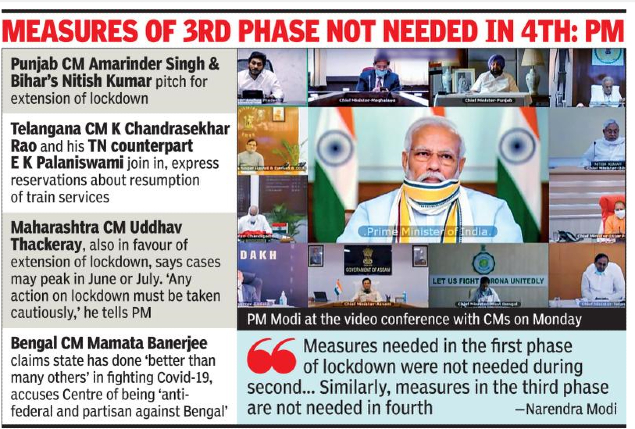 The long interaction, where all the CMs spoke, saw some in favor of continuing the blockade beyond May 17. Given the focus on containment, the lock cannot be canceled even as the curbs are eased further, particularly in the ‘green zones’, it is on the anvil.

While Bengal CM Mamata Banerjee complained about the Center’s “unilateral” actions, she likes other CMs like Uddhav Thackeray and Nitish Kumar favored the extension of the blockade. Kumar expressed reservations about the resumption of train services.

Kerala CM Pinarayi Vijayan said states should be able to decide on public transportation, while Odisha CM Naveen Patnaik suggested that there should be general closure principles. Thackeray expressed concern about reports of a second wave of infection in China.

The focus now should be to prevent Covid from spreading to rural areas: PM


Sources said the Prime Minister was well aware of the need to continue all efforts to contain the disease so that the gains from the blockade were not lost, and also indirectly referred to the need to focus on problem areas.

“We now have a reasonably clear indication as to the geographical spread of the pandemic in India, including the most affected areas. Also, in recent weeks, officials have understood operational procedures at a time like this, down to the district level, ”Modi said, suggesting that the disease monitoring mechanism was gaining experience and becoming more effective.

The prime minister further said that the effort should now be to stop the spread of Covid-19 to rural areas. The comment came in the context of rural areas that remained relatively infection-free.

He said that one must understand that the world had fundamentally changed after Covid-19. “Now the world will be before the crown, after the crown, as in the case of world wars,” he added. Prime Minister Modi said the new way of life would be based on the principle of “jaan se lekar jag tak”, from one individual to all of humanity.