SRINAGAR: One of Kashmir’s most wanted terrorists, Hizbul commander Mujahideen Riyaz Naikoo, was killed on Wednesday along with an aide in a five-hour shootout with security forces in his native Baighpora in the Pulwama district, bringing down the curtain at eight. year that saw him go from a math teacher to a terrorist brain with a reward of Rs 12 lakh on his head.

When news of Naikoo’s death spread, the Union Territory administration again suspended mobile Internet throughout the Valley and voice communication on all networks except BSNL. Stone-throwing incidents were reported against the security forces in parts of southern Kashmir and central Srinagar.

Naikoo and his aide, identified as Adil, were eliminated within hours of the security forces killing two men from Lashkar-e-Taiba in a separate operation in a nearby village, culminating a relentless offensive against terrorist teams since the encounter. May 3 with Handwara in which eight security personnel, including two army officers, Colonel Ashutosh Sharma and Major Anuj Sood, were killed in action. 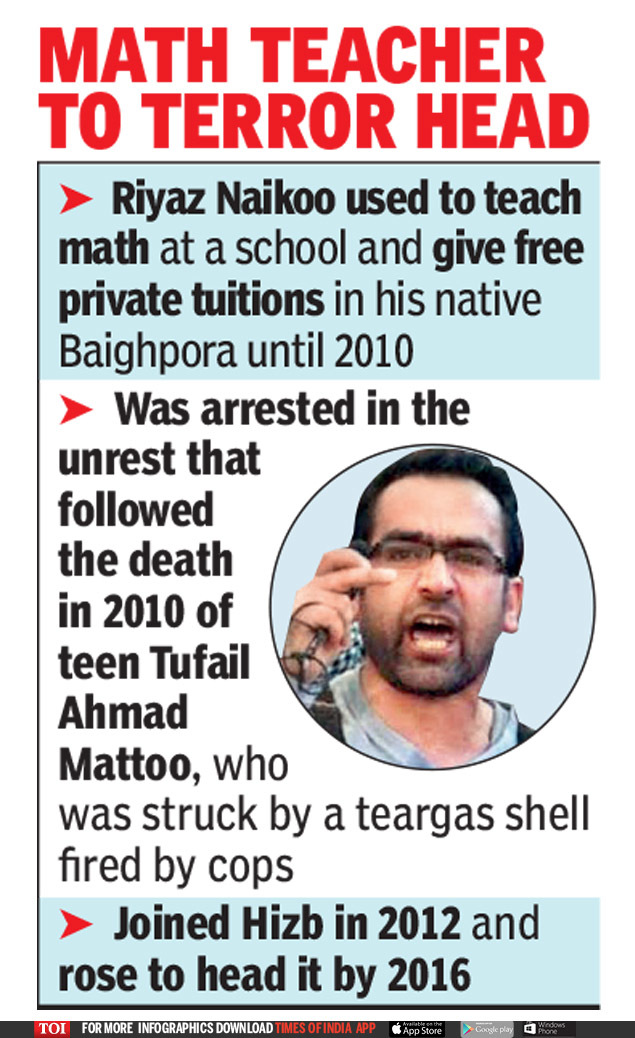 Known for doing a Houdini act every time he was cornered by security forces, Naikoo had been hiding in a concrete hideout in Baighpora since Tuesday night, when a joint team of the Army’s 50 Rashtriya Rifles, the 185 Bn of the CRPF and the police began an operation to evacuate. the two Lashkar-e-Taiba terrorists from the village of Khrew Shaar Shali, also in the Pulwama district.

A senior J&K police official said there was news that Naikoo was visiting Baighpora, less than 10 km from Khrew, to see his sick mother, Zeba, even when security forces were in an encounter with the Lashkar terrorists.

“At around 3 a.m. on Wednesday, a separate J&K police team, the 55 Army Rashtriya and CRPF rifles arrived in Baighpora and were immediately greeted with a round of fire. After an exchange of fire of five hours, Naikoo was killed – a concrete bunker that was later destroyed with explosives, ”said a police officer.

As Hizbul Mujahideen’s oldest operational commander in Kashmir, Naikoo, who used the alias Mohammad Bin Qasim, was known for his methods, which included attacking the families of police personnel and regularly extorting garden owners in the south. of Kashmir.

Although Naikoo joined the team only in 2012, his rise in the ranks was apparently meteoric. Known for being close to Burhan Wani, who used to be the Hizbul Mujahideen poster boy until his death in a 2016 encounter, Naikoo stepped in to fill the void after Burhan’s immediate successor, Zakir Rashid Bhat, alias Zakir Musa, was kicked off the team.

“Naikoo was on a list of the 12 most wanted militants drawn up by the Army in 2017. He was also part of a list of the 17 most important militants issued by intelligence agencies in 2018. Being a member of the A ++ category, received a reward of Rs 12 lakh on his head, “said the police.