NEW DELHI: An upset government distanced itself from controversial tax proposals, such as a Covid-19 dismissal and a wealth tax by a group of revenue service officials, not only rejected the suggestions but also ordered an investigation against the Officers who released report Sunday.

The prompt rebuttal was intended to stop panic among taxpayers, who are already nervous about the future with income under stress. The Indian Tax Service Officers Association also offered clarification that the report did not represent the views of all officers. 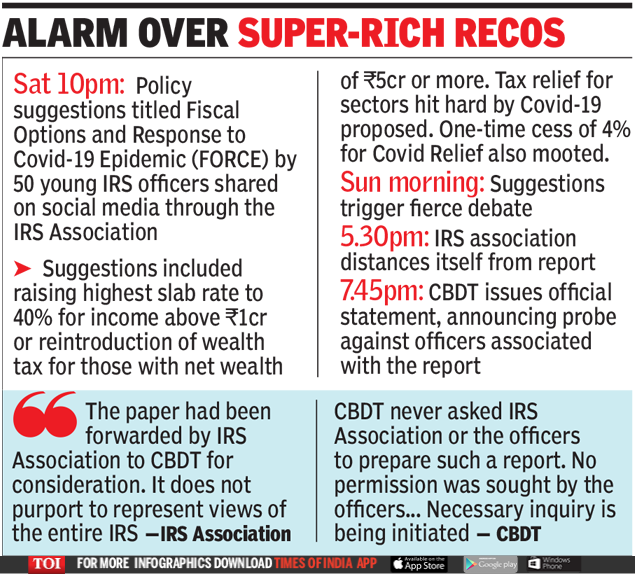 The “Policy Suggestions” titled “Fiscal Options and Response to the Covid-19 Epidemic” (FORCE) by 50 young IRS officers were shared on social media through the IRS association’s Twitter account on Saturday by the night with the full report. There were several other less controversial suggestions, but tax speculation clearly rocked the government, which said officials had violated service rules by releasing the report to the public.

It quickly sparked a debate, and in the afternoon, government officials said there was no movement to implement these measures, nor that the finance ministry or PMO were seeking the report, as suggested by some comments on social media. “It is not the right time to suggest higher levies when the pandemic has significantly affected the incomes of salaried and non-salaried people, as well as businesses,” said a senior official.

Sensing a controversy, the officers’ corps also tried to distance themselves from the report. “The FORCE document of 50 young IRS officers suggesting policy measures was sent by the IRS association to the Central Board of Direct Taxes (CBDT) for consideration. It is not intended to represent the official views of the entire IRS or the I-T department, ”he tweeted.

Finance ministry officials said the suggestions were “inappropriate” and that the government had not asked for any reports. They also said the report was contrary to the government’s decision to support people during these difficult times.

The CBDT released an official statement, announcing that an investigation would be conducted against the officers associated with the report. “It is unequivocally claimed that CBDT never asked the IRS association or these officers to prepare such a report. The officers did not seek any permission before publishing their personal views and suggestions on official matters, which is a violation of the existing rules of conduct. The necessary investigation is being started on this matter, “he said.

The young officers, who prepared the report, suggested that at times like these, the so-called “super rich” had a greater obligation to guarantee the public good in general. The document recommended that this segment could be taxed through two alternative means, which could be imposed for a limited and fixed period of time. It supported raising the highest slab rate to 40% for total income levels above a minimum threshold of Rs 1 crore or the reintroduction of wealth tax for those with a net wealth of Rs 5 crore or more. The policy document had several suggestions and tax breaks for sectors affected by the Covid-19 pandemic.

Administratively, the first will be easier to implement. However, the revenue gain associated with both options should be calculated to see if the earnings associated with the last option perform better in terms of a cost-benefit analysis, “the document suggested among a series of measures to increase revenue and provide relief to the economy.

He said that the collection of additional income through any of the previous steps was Rs 50,000 crore and this amount should be placed in a separate kitty, almost like an escrow account.

Then, the government could identify between 5 and 10 more crucial projects or schemes that involve significant spending, which are likely to have a decisive impact on the revival of the economy. The costs associated with such projects would be calculated, and these projects should be listed on a government website, accessible to the public, the document suggested.

The document also recommended several other measures, such as a new tax savings scheme, such as Covid Savings Certificates (similar to National Savings Certificates) to mobilize more funds, as well as a new scheme for indisputable demand. It also supported the idea of ​​reintroducing the inheritance tax, which was in force in the country until 1985.

For the healthcare sector, the document recommended a full tax exemption / tax exemption for the next three years for all companies, companies and businesses operating in this segment.