NEW DELHI: Princess of Oman Sayyida Mona bint Fahd al Said, who had a Twitter account posing as her, issued a clarification on the alleged tweet about the expulsion of Indian workers from Oman, government sources said on Thursday. .

A Twitter account @SayyidaMona tweeted on Wednesday that the Omani government will expel a million workers living in Oman if the “persecution” of Muslims in India is not stopped.

“Oman is with his Muslim brothers and sisters in India. If the Indian government does not stop the persecution of the Muslims, then 1 million workers living in Oman can be expelled. I will address this problem with the Sultan of Oman @narendramodi.” the fake account had tweeted. 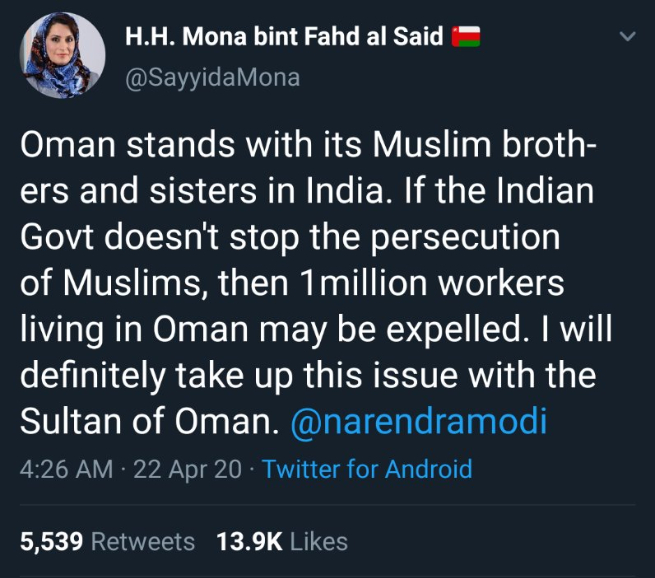 The fake tweet had also tagged Prime Minister Narendra Modi to spread misinformation. The account has now been suspended.

Later, the princess issued a clarification, saying that the previous Twitter identifier does not belong to her and issued a statement denouncing the false tweet.

“Friends, first of all, I thank you for your concern to verify the offensive post posted through an account posing as me and that you are sure I have no connection to it.”

“With full confidence in all of you to strengthen awareness among all regarding such activities, which are not acceptable to Omani society, I confirm again that my presence on social networks is restricted in the following accounts: @hhmonaalsaid and @MonaFahad 13 ” she wrote in a statement.

The Indian Ambassador to Oman, Munu Mahawar, thanked Mona al-Said for her clarification, adding that both countries will continue to work to strengthen their relationship.

“I thank HH @ MonaFahad13 for clearing up the false posts attributed to him on social media. India values ​​his friendly relations with Oman and will continue to work closely with the Government and people of Oman to further strengthen our special relationship,” he tweeted.

I thank HH @ MonaFahad13 for clearing up the fake social media posts attributed to her. India values ​​their friendship … https://t.co/7awe3NaWHv

According to Indian government sources, the tweet appears to be a deliberate attempt to sow discord between the two nations.

“The Princess of Oman has clarified that her Twitter identifier was supplanted. We see a design to create discord in India and also in our relations with the Gulf countries. Our missions have asked these nations not to fall for such malicious propaganda.” , the sources said. .

“Our missions are in contact with host governments. There is an ongoing discussion on the well-being of Indian workers. We have seen such reports. This is a dynamic situation and it will continue to participate,” they added.