With 229 new cases registered in the past 24 hours, Gujarat emerged as the second most affected state after Maharashtra on Wednesday, reporting 431 new cases. Just five days ago, Gujarat was at number six, with Delhi, Rajasthan, Tamil Nadu and Madhya Pradesh, apart from Maharashtra, with more confirmed cases.

With 92 new cases (compared to 75 on Tuesday) and 2,248 in total, Delhi is now the third most affected state in the country. Maharashtra, Gujarat and Delhi only represent more than 48% of the total of 21,355 cases so far. India’s death toll at the time of publication was 683. With one more death, Delhi’s death toll is now 48. 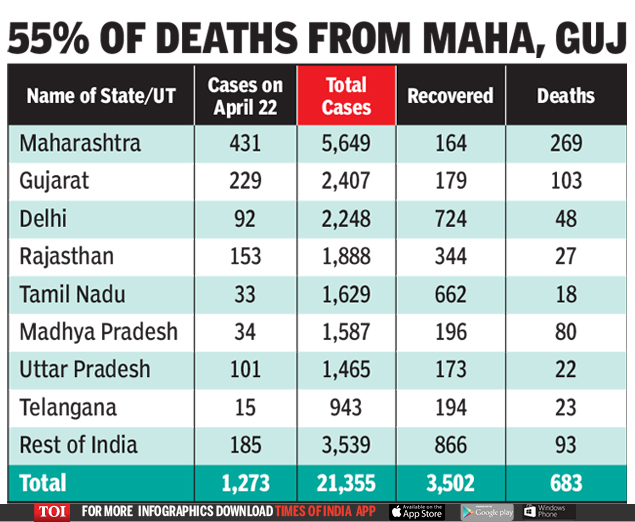 With 13 deaths on Wednesday, Gujarat’s number rose to 103, making it the second state after Maharashtra to cross the 100 mark. Of the 13 deaths, nine were recorded in Ahmedabad alone, while three were from Vadodara and one from Waltz. Gujarat’s current recovery rate is 7.4%.

Delhi added on Wednesday a death of Covid-19, that of a 40-year-old Jahangipuri resident who died during treatment at Baba Saheb Ambedkar Hospital in Rohini four days ago. The test results confirmed on Wednesday that it was positive, after which the 57 health workers at the hospital who had come into contact with her were notified that they had been quarantined.

In Rajasthan, 153 new cases were registered, bringing the total number of cases to 1,888. A 55-year-old woman, who succumbed while receiving treatment at Sawai Man Singh Hospital, was confirmed positive for Covid-19 on Wednesday. With this, Rajasthan’s total toll has reached 27.

One person died and 15 tested positive for Covid-19 in Telangana, bringing the state’s total case count to 943 and the number of deaths to 23.

Andhra Pradesh recorded 56 new cases as the count rose to 813. It also reported two more deaths, bringing the number to 24.

Oxford Vaccine Corona: Human trials of the Covid-19 vaccine developed by the University of Oxford begin in the UK | World News