Rumita Patel
|  Apr 12, 2020
NEW DELHI: The Covid-19 outbreak in India hit another peak on Friday with the number of new cases exceeding 800 for the first time following a large surge in Delhi, which reported 183 new infections, as well as a growing number in Maharashtra, Gujarat, Rajasthan and Tamil Nadu.

The total coronavirus count in the country exceeded 7,500, while the death toll rose to 258, with 26 victims reported in various states on Friday. As many as 859 new cases were confirmed by states that broke Thursday’s record of 787 cases, according to numbers compiled by TOI.

Delhi experienced a doubling of new cases compared to the highest of 93 on Wednesday, with 84% (154) of these coming from members of the Tablighi Jamaat quarantined after being evacuated from the organization’s headquarters in Nizamuddin. . Delhi also recorded two deaths, bringing its casualty count to 14. 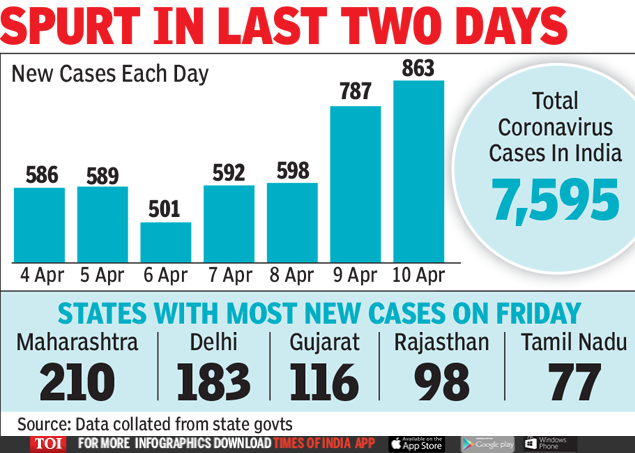 Meanwhile, Mumbai became the first Indian city to register 1,000 Covid-19 cases. . With 132 new cases and 10 deaths reported on Friday, Mumbai’s total cases were 1,008 and the casualties were 64. The city represents 64% of the cases in Maharashtra, which reported more than 200 new infections for the second consecutive day.

In Delhi, a 56-year-old man who had contracted Covid-19 while receiving treatment for gallbladder cancer at the Delhi State Cancer Institute (DSCI), a state hospital where 22 health workers have confirmed that the test it is positive for Covid-19. It is one of the latest victims of the new coronavirus in Delhi.

In addition, there are 50 Covid-19 patients in the capital for whom the source of infection has not yet been determined, authorities said.

Maharashtra’s total coronavirus count reached 1,574 on Friday. The state represents more than 20% of all cases in India. Dharavi, the most densely populated town in Mumbai, reported 11 new cases.

Northeast India reported the first death from Covid-19 on Friday when a 65-year-old man from the Hailakandi district of Assam succumbed to the infection. He had returned from Saudi Arabia on March 18 after performing Umrah Haj and had also attended the Tablighi Jamaat meeting in Delhi.

Gujarat added 116 new cases on Friday, its highest jump in a single day, beating the 76 recorded on Thursday, bringing the state’s count to 378. Up to 55 cases from Ahmedabad were reported, followed by 37 cases from Vadodara. Gujarat also recorded on Friday the first positive case of a doctor involved in Covid surveillance.

Kerala, which was the first state to report Covid-19 in the country, maintained its downward trend in cases, registering just seven on Friday, bringing the state’s total count to 364. Up to 124 Covid-19 patients have been Recovered in Kerala from the first the case was reported on January 30.

In Bihar, two more positive cases of Covid-19 have been reported, bringing the total number of cases in the state to 60. Of these, 29 cases are from one district, Siwan.

Both new cases, a 10-year-old girl and a 28-year-old man, contracted the virus from the same person, who had returned from Oman on March 21 and tested positive more than a week later. This man in his 20s so far has transmitted the virus to 22 people, including his 45-year-old mother and 22-year-old wife.