Rumita Patel
|  Apr 10, 2020
BENGALURU: Karnataka’s cabinet on Thursday rejected the recommendations of a panel of medical experts who advocate a “gradual lifting” of the 21-day blockade and favored the complete closure until April 30. “Cabinet ministers have suggested the extension of the large-scale blockade verify the spread of Covid-19. We will make a final decision after consulting the Prime Minister, “Prime Minister BS Yediyurappa said.

The prime minister is slated to hold a conference call with the CM on Saturday to seek his opinion on the continued blockade. 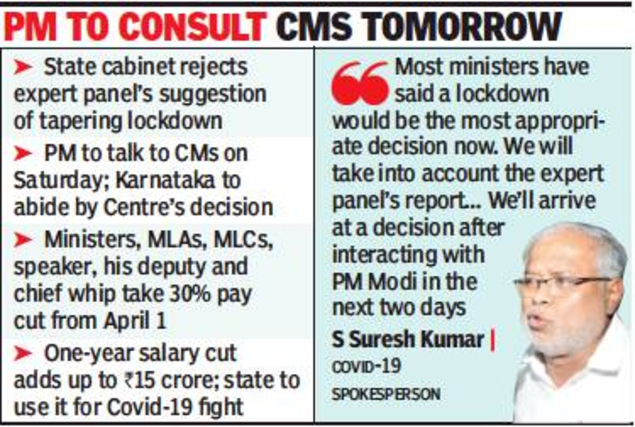 The cabinet also decided to cut the salaries of ministers, MLA, MLC, speaker, vice president and whip chief by 30% for one year and give it to the state government for use in fighting the Covid-19 pandemic. “The pay cut begins on April 1 and the total amount adds up to Rs 15 crore,” said Minister of Parliamentary Law and Parliamentary Affairs JC Madhuswamy.

The expert panel tasked with designing an exit strategy recommended continuing the blockade at Covid-19 hot spots and restrictions in the rest of the state. The report presented to the CM on Wednesday suggested closing schools and universities until May 31 and restrictions on mass gatherings.

The state cabinet also decided to compensate for the losses suffered by farmers due to premature rain in many parts of Karnataka.

We have asked the district administrations to submit reports and then we will issue compensation, “Yediyurappa said, referring to incidents of rain-damaged rice crops in Koppal. The cabinet decided to release Rs1crore each to 49 drought-affected taluks and Rs 50 each lakh to city panchayats to address the problem of drinking water.

To help entrepreneurs, the cabinet decided to extend the time until June 30 to present the GST statements for 2019-20. The government has ordered the distribution of rations to more than 2 lakh families, who do not have ration cards or are waiting for one.