NEW DELHI: The death toll in India from the Covid-19 outbreak increased more than 100 with 27 patients succumbing to the infection in the past 24 hours or so, the highest number of victims reported in one day so far , with Maharashtra alone reporting 13 deaths on Sunday.

The number of coronavirus cases also exceeded 4,000, as states reported 541 new cases on Sunday, the fourth consecutive day of more than 500 infections in the country. The number of cases has doubled in the past four days, from just over 2,000 on April 1 to more than 4,200 to press time on Sunday.

Make Your Own Mask: Join the TOI Initiative to Help Keep You and the Nation Safe

Except for event-related cases, Covid-19 cases in India would have doubled in 7.4 days, while currently doubling in 4.1 days because several infected members of Jamaat were scattered across the country to spread the virus multiple times.

“The doubling rate, which means on how many days the number of Covid-19 cases doubles, is currently 4.1 days. But if the cases reported due to the Tablighi Jamaat event had not arrived, then the doubling rate would have been 7.4 days, ”said the joint secretary of the health ministry, Lav Agarwal. 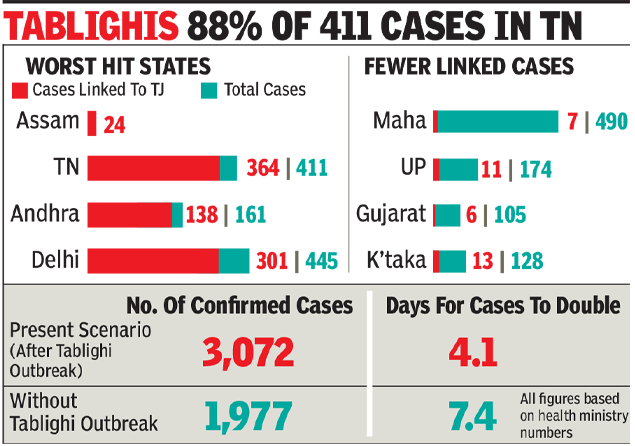 According to the health ministry, as of Sunday, a total of 3,374 positive cases and 79 deaths were reported across the country. Of this, at least 472 new cases and 11 deaths were reported in the last 24 hours, according to data from the Ministry of Health. The ministry’s numbers are likely to disagree with those reported by state governments due to a delay in data collection and verification.

On Saturday, the ministry had said that 30% of all reported cases in the country so far were linked to Tablighi Jamaat.

About 274 districts across the country have reported Covid-19 cases so far. With the spread of disease transmission to broader geographies, the cabinet secretary had asked district magistrates and collectors from different districts with more cases to share their experience with other districts. At a meeting on Sunday, the district administrations of those districts, including Bhilwara, Agra, Gautam Buddh Nagar, East Delhi and Mumbai, shared their observations.

“The two key observations about the strategies that worked were: one, proactive and ruthless implementation of containment measures at the field level, and readiness to the point of being overly prepared,” said Agarwal.

In addition, the government has decided to have a crisis management plan for Covid-19 in each district.

The government also allayed concerns about the spread of the virus through the air, clarifying that the infection is only transmitted through drops released due to the cough, sneeze and breath of a Covid-19 patient.

“Coronavirus infection is not airborne but a droplet infection. If it had been an airborne infection, everyone in a family of an infected person would have contracted the virus because everyone would be breathing the air infected by the family member. The same would apply to other patients in a hospital. In some cases, scientists have found it in some settings, “said Dr. R R Gangakhedkar, chief of epidemiology and communicable diseases at the Indian Council for Medical Research (ICMR).