Home | India | Top Headlines | FALSE ALERT: No, Russia does not have lions roaming the streets to keep people inside

FALSE ALERT: No, Russia does not have lions roaming the streets to keep people inside

Many social media users share a graphics card with an image of a lion, which looks like a screenshot from a television news channel, alleging that Russia has unleashed more than 500 lions on its streets to ensure that people remain in the interior in the light of the coronavirus. pandemic and confinement.

The graphics card has text that reads: “Russia unleashed more than 500 lions on its streets to ensure that people stay indoors during this pandemic outbreak. Vladmir Putin released some 500 lions for people to stay in. interior (sic) “. Some other social media users are sharing the lion image alone, without the ‘Breaking News’ graphics, making similar claims. For example, the Twitter user using the name ‘@Mavunya_’ tweeted the lion image saying: “Russian President Vladimir Putin released 800 lions and tigers across Russia to devour anyone who comes out. Stay home or die hard. ” Both images are also widely shared on Facebook and WhatsApp.

The lion image was clicked in Johannesburg in South Africa in 2016. It has nothing to do with Russia or the coronavirus pandemic.

VERIFICATION AND METHODOLOGY
A simple reverse image search on the lion image will take you to a
report published in Metro (UK) on April 15, 2016, with the title “The lion casually walks through the city center”. The report bears the same image and is credited to the Caters News Agency. 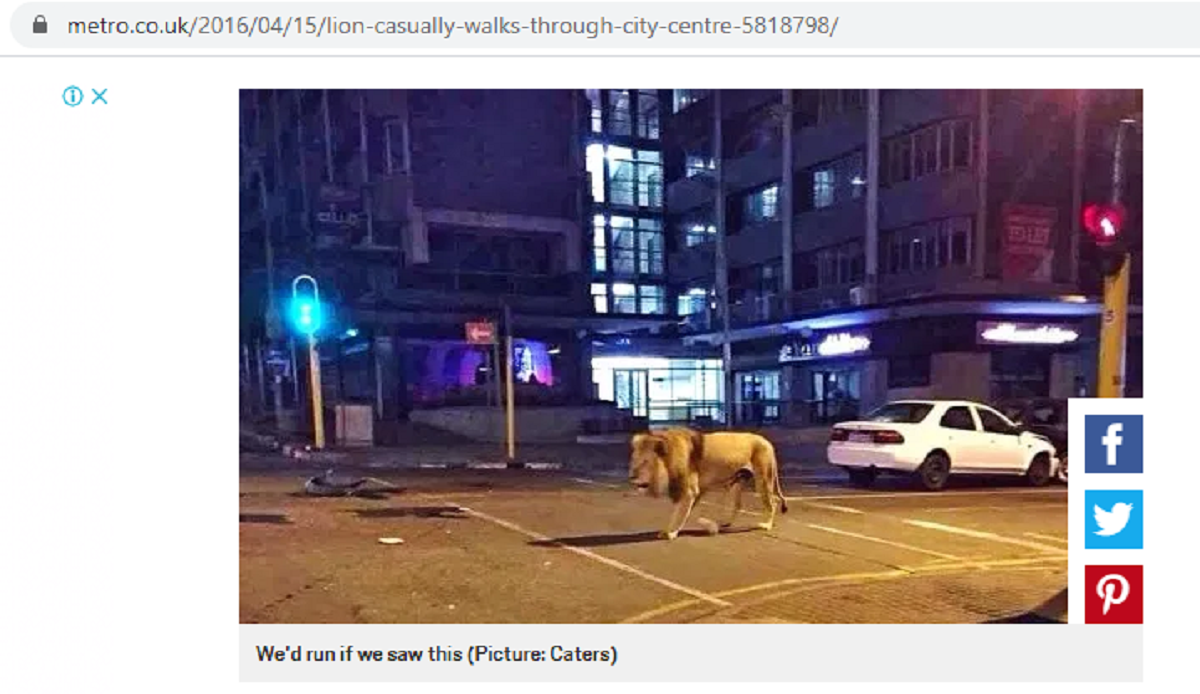 On the South African incident in Johannesburg, the report says the lion, Columbus, was brought into town to ‘act’ in a movie by a local production, but that the production company did not take the necessary permits for filming.

It is clear that the photo is from 2016 and has nothing to do with Russia, Vladimir Putin and the Covid-19 pandemic.

‘Break Your Own News’ is a website that allows people to make their own ‘breaking news’ graphics cards. Some fake news street vendors used Colters de Caters’ image to create a fake breaking news graphic.

Furthermore, there are no credible reports of Russia doing anything remotely close to what is claimed.

The Times Fact Check has found that the claim that Russia has unleashed more than 500 lions on its streets to ensure that people remain indoors in light of the coronavirus pandemic is false. The lion image used to make this claim was clicked in 2016.