LUCKNOW: The UP government authorized itself on Friday to recover the cost of property damaged during the protests, riots and demonstrations of the accused by enacting the ‘UP Public and Private Property Recovery Ordinance’.

The ordinance was passed by Yogi Adityanath’s cabinet even as a three-judge Supreme Court bench is slated to hear the state’s special license petition next week challenging the Allahabad high court order that asked the government to remove the billboards with names, photos and addresses of 57 Protesters accused of damaging property during the anti-CAA violence in Lucknow on December 19. 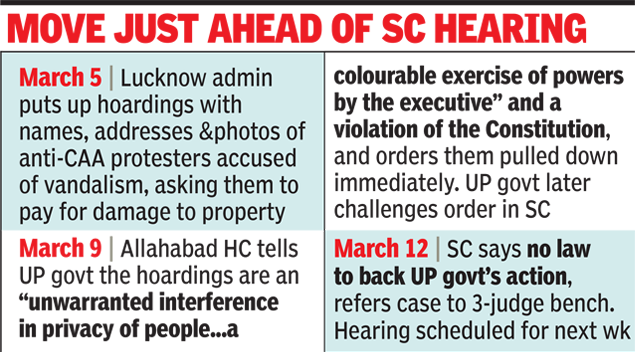 Following large-scale violence in December during protests damaging property worth millions of rupees, the government had sent recovery notices to the accused, citing a 2009 Supreme Court order.

State Finance Minister Suresh Khanna told reporters after the cabinet meeting that the SC, referring to petition 77/2007, had said in 2009 that a strict law was needed to recover costs if the property Private or public had been damaged during protests such as political demonstrations. , strikes and sit-ins.

“Following that order, we have approved the ordinance. The next step is to draft the rules for this law which will also be approved by the cabinet,” Khanna said, adding that in the 2009 order, the SC had spoken of constituting a recovery court. to recover losses to government and private properties in political and illegal upheavals in the country.

Although the rules for recovering the cost of property damage have not yet been framed, a UP government source said it is likely to include “posting photos and other details of the accused in such cases.”

As anti-CAA protests erupted across UP, Yogi had said the government would recoup the cost of destroying the property of those who committed violence. The government delivered more than 500 notices to people across the state after the December violence. Of these, 57 notices were issued in Lucknow alone.

Following the 2009 SC order, the Allahabad High Court also issued a similar order on December 2, 2010, followed by a government order (GO) on January 8, 2011 during the BSP regime. The GO of 2011 said: “… the damage suffered to public property will be evaluated and the department in question, the local body, the public corporation, etc., that is, the owner of the property, will file a claim for the realization of such quantity of the political parties / people (who requested agitation / procession in which the damage occurs) “.

It adds that if the person or persons against whom the claim was presented were responsible for the loss, “the amount evaluated and awarded by said competent authority will be carried out, if the responsible person does not pay himself within the indicated time, such as delays in income from the land. ”

The Allahahad High Court learned of these ‘name and shame’ fences suo motu and ordered the government to immediately lower the banners. However, the government challenged the order in the Supreme Court.

Referring to the 2009 SC order, government spokesman Sidharth Nath Singh said: “The SC had asked for a law to be enacted and we only respected it. The CM’s decision to challenge the HC order will ensure that such incidents of violent protests have no place to place in the state again. ”

Coronavirus cases worldwide: coronavirus count may be the tip of the iceberg while patients are not tested | World News