MUMBAI: In a matter of a couple of hours, BCCI went from planning to host the one-day Internationals between India and South Africa in one place, behind closed doors, to canceling the series with immediate effect on Friday afternoon.

Following the Covid-19 outbreak and the decision to suspend the Indian Premier League (IPL) until April 15, the two cricket boards, India and South Africa, also exchanged emails, discussing the existential threat. In doing so, both BCCI and Cricket South Africa (CSA) reached a mutually agreeable decision that it would be better to reschedule the ongoing series to a later date that can be jointly resolved if the crisis subsides.

Star India broadcasters are also known to have accepted the decision, calling it “correct.”

Previously, the BCCI was contemplating conducting the two ODIs at the same location and playing in empty spots with the game televised and broadcast.

However, the IPL suspension has led to an escalation in the handling of issues, as CSA asked the Indian board to consider immediate cancellation.

Interim CSA CEO Dr. Jacques Faul and Interim Cricket Director Graeme Smith kept in touch with BCCI and “expressed their gratitude for their understanding and cooperation in reaching this responsible decision,” moments after the series was suspended. 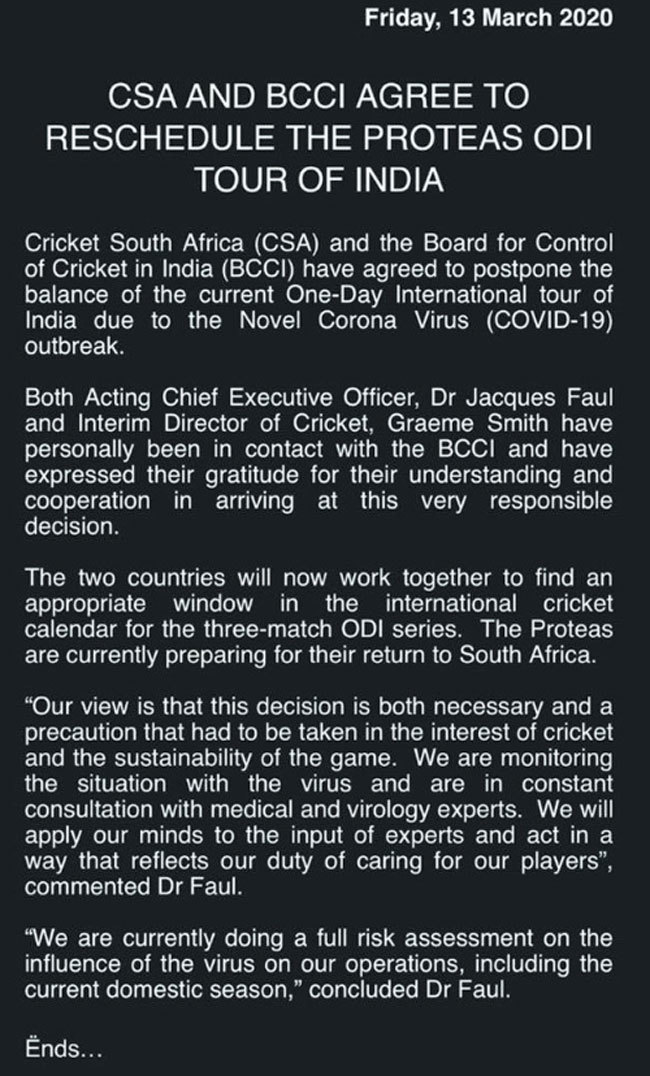 The South African team was heading to New Delhi to catch the flight back home on Friday night.

“This decision is both necessary and a precaution that should have been taken. We are monitoring the situation and are in constant consultation with medical and virology experts. We will apply our minds to the input of experts and act in a way that reflects our duty to care for our players, ”said Dr. Faul in a statement sent by CSA.