US court victory USA: IT service companies are no longer restricted by USCIS memo

MUMBAI: An order passed by a United States District Court on March 10 is a great victory for the IT consulting and services sector, which in recent years has faced an ever-increasing rate of requests for Evidence (RFE) and denials of H- 1B visa applications.

This trend was noted not only in cases of new H-1B applications filed on behalf of prospective employees, but also in cases of visa extensions for existing employees.

This adverse decline was largely due to the operation of recent policy memoranda issued by the United States Citizenship and Immigration Services (USCIS), which placed an onerous burden of proof on companies that located their employees in sites from third parties.

Judge Rosemary M Collyer has deemed invalid the policy note issued by USCIS in February 2018, which imposed burdensome requirements on IT service companies. It has also maintained as invalid a policy memorandum dating back to 2010 (dubbed Memo Neufeld), which had created a new definition of employer-employee relations. 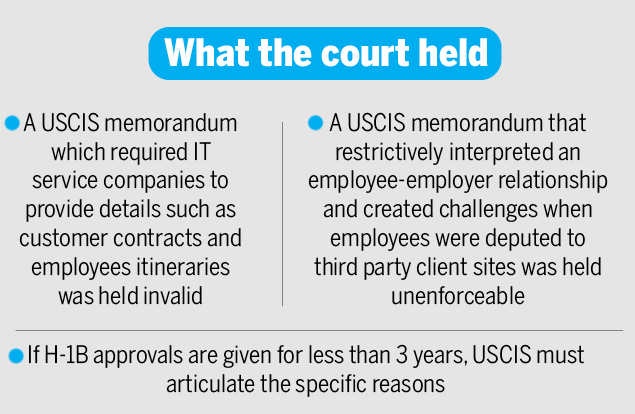 In short, these companies, for now, won’t have to meet the burdensome requirement of providing detailed customer contracts and employee itineraries assigned to customer sites.

IT service companies also discovered that the tenure of assigned H-1B visas was being reduced. In some cases, it was only for a few weeks or days, as opposed to the allowed three-year period.

In its order, approved in the case of the IT Serve Alliance, a large coalition of IT service companies in the US. USA And several of its member companies, Judge Collyer also held that if the USCIS wants to grant H-1B approvals for periods of less than three years (or implicitly the periods requested), it must articulate the specific reasons for the shorter duration.

Speaking to TOI, Cyrus Mehta, founder of a New York-based immigration law firm, said: “The decision applies common sense and eliminates the senseless rules the government has imposed on IT employers with the goal of killing this industry. Even H-1B workers will benefit as they can have more stability and enjoy predictability when requesting H-1B extensions, ”added Mehta.

Annually, only 85,000 H-1B visas are issued for initial employment by the United States authorities (which includes 20,000 reserved for those with a United States advanced degree or Master’s cap). Of this, 60% plus allocations are typically for Indian beneficiaries (employees). Understandably, the order will be of great help to Indian technicians aspiring to work in the United States.

To provide background, due to the February 2018 policy note, IT service companies when applying for new H1-B visas or even when renewing H-1B visas of existing employees had to demonstrate ‘specific guaranteed work assignments and not speculative ‘for the full duration of the three-year visa. A large amount of evidence had to be provided in the form of detailed customer contracts and employee itineraries.

The sponsoring employer also had to demonstrate that the “employer-employee relationship” would be maintained even if the employee was working at a customer site. These changes also led to long delays in the processing of H-1B applications.

A recent analysis of the National Foundation for America Policy (NFAP) showed that denial rates for many IT service companies for new H-1B requests had increased from approximately 2% in fiscal year 2015 to over 30 % in FY 2019. Both IT services companies that were multinationals and contract tech workers from India and companies based in India suffered from this high denial rate.

TOI, in its May 15, 2019 issue, had covered the petition filed by the ITServe Alliance in court. During the hearing, as TOI had reported, Judge Collyer had noted that the policy changes were concerning. Almost ten months later, she maintained that USCIS has exceeded the law, through the issuance of said policy memoranda.

Speaking to TOI, Arlington-based Rajiv S Khanna, managing attorney at Immigration.com said: “The order states that USCIS must not administer justice through random policy memoranda and must, if it wishes to change the regulations, do so at through a formal process. In fact, USCIS appears to have been illegally targeting the IT services sector. ”

According to the Immigration and Naturalization Service Regulations, 1991, an employer-employee relationship is evidenced by some aspect of control, which can be shown in various ways, be it the ability to hire, pay, fire, supervise or control. USCIS had abandoned this regulation and required the assignment of daily duties to demonstrate that an employer-employee relationship existed.

“An employer should not be required to demonstrate control. Any one of these factors is enough: ability to hire, pay, fire, supervise “or” control the employee’s job, “Khanna explained.

In recent years, the USCIS has rejected several H-1B petitions or even visa extensions for the same job, claiming that the occupation is not a “specialized occupation.” “There are indications in this decision that the court is not buying the USCIS restrictive interpretation of specialized occupation. The USCIS is likely to lose many more cases on this issue,” added Khanna.

Mehta summarized by saying, “This is a significant victory as USCIS can no longer deny cases based on the alleged lack of an employee-employer relationship, or the lack of a specific contract with the end customer or based on employment. speculative due to the lack of a precise itinerary or schedule. This victory will benefit IT consulting and services companies that have been the subject of all sorts of arbitrary denials of H-1B applications when they placed workers with third-party clients, which is a legitimate business model and benefits American companies. ”

Members in leadership positions at the ITServe Alliance welcomed the trial. The association further adds that the court has given USCIS sixty days to take action on all pending petitions. The ITServe Alliance expects them to be approved.

Amar Varda, National President (2020) said: “A decision like this has been long overdue, we finally have the judiciary system with employers that USCIS has been off limits for a long time.”

Advisory Director Kishore Khandavalli added: “Instead of implementing the rule of law, the USCIS has resorted to random rulemaking through internal” memos, “the game is over and checkmate!”

Deepali Khadakban, director (PAC) said: “We are just getting started and we have many more elements that we need to achieve and we demand justice on behalf of H-1B employees and employers.”