Amid the depression, 63 luxury apartments in Mumbai were sold for Rs 1.8 billion rupees in 6 months | Mumbai News

MUMBAI: Builders are finding few buyers for large and luxury apartments, but there are still a small number of high-end buyers who quietly pick up the high-end properties in Mumbai.

In the last six months, 63 luxury apartments were sold for an approximate value of Rs 1.8 billion rupees in the south and center of Mumbai. These ultra-luxury homes, including duplexes and penthouses, reached prices as high as Rs 50 crore-Rs 78 crore. 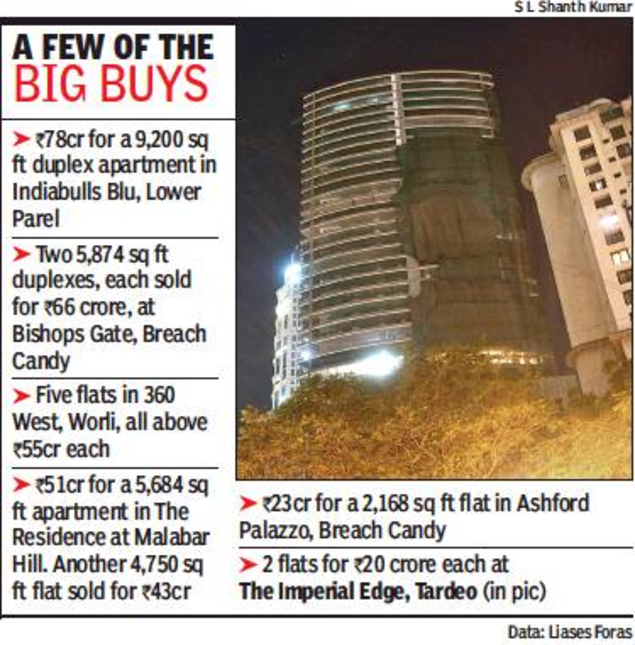 Information obtained from the tax office, where property transactions are recorded, shows that the most expensive was a 9,200-square-foot duplex in Indiabulls Blu in Lower Parel that was sold for 78.38 million rupees last November.

Bishops Gate, a luxury tower in front of the Breach Candy Club, recorded the sale of two duplexes of five BHK, each of more than Rs 66 million. The project is developed by Peninsula Land. In Worli, five apartments were sold, each of more than Rs 55 crore, in the high-end residential tower of Oberoi Realty, 360 West.

In Breach Candy, a new luxury building, Ashford Palazzo of Ashford Developers, recorded the sale of an apartment of 2,168 square feet on the 12th floor for Rs 23 crore to more than Rs 1 lakh per square foot.

In Tardeo, two apartment sales were recorded at The Imperial Edge, a luxury skyscraper jointly developed by Shapoorji Pallonji and Dilip Thacker Group (S D Corporation). They obtained the builder Rs 20 crore each at a rate of more than Rs 1.30 lakh per square foot.

A new tower, The Residence, in Malabar Hill got two buyers: one for a 5,684-square-foot apartment that sold for Rs 51 million and the other (4,750 square feet) for Rs 43 million.

Experts say that these sales do not reflect the market because there is an excess supply. Data from Liases Foras, a real estate research firm, shows that in the city of the island, apartments that cost more than 8 million rupees sell 350 units a year. However, the unsold stock is 3,300 units valued at Rs 62,000 crore.

Why Indian parliamentarians support the fight against malaria: analysis