NEW DELHI: India continues to languish in the strategically vulnerable position of being the second largest importer of weapons in the world, just behind Saudi Arabia. The only positive aspect is that India has made its way to position 23 among the top 25 arms exporters, with Myanmar, Sri Lanka and Mauritius being its main clients, although it constitutes an insignificant proportion of 0.2% of the total global figure.

“Between 2010-14 and 2015-19, arms imports from India and Pakistan decreased by 32% and 39%, respectively. While both countries have long-standing goals to produce their own primary weapons, they continue to rely heavily on imports and have substantial pending orders and plans for the import of all types of primary weapons, “said the global think tank.

SIPRI, in fact, cited the example of India’s Balakot airstrikes and Pakistan’s attempted counterattack in February last year to show the overwhelming dependence of the two on foreign weapons. If India deployed French (Mirage-2000) and Russian (Sukhoi-30MKI and MiG-21) fighters, along with Israeli precision guided bombs (Spice-2000) and Swedish artillery (Bofors), Pakistan would use Americans (F-16) and Chinese aircraft (JF-17) and Swedish AWACS during the military confrontation. 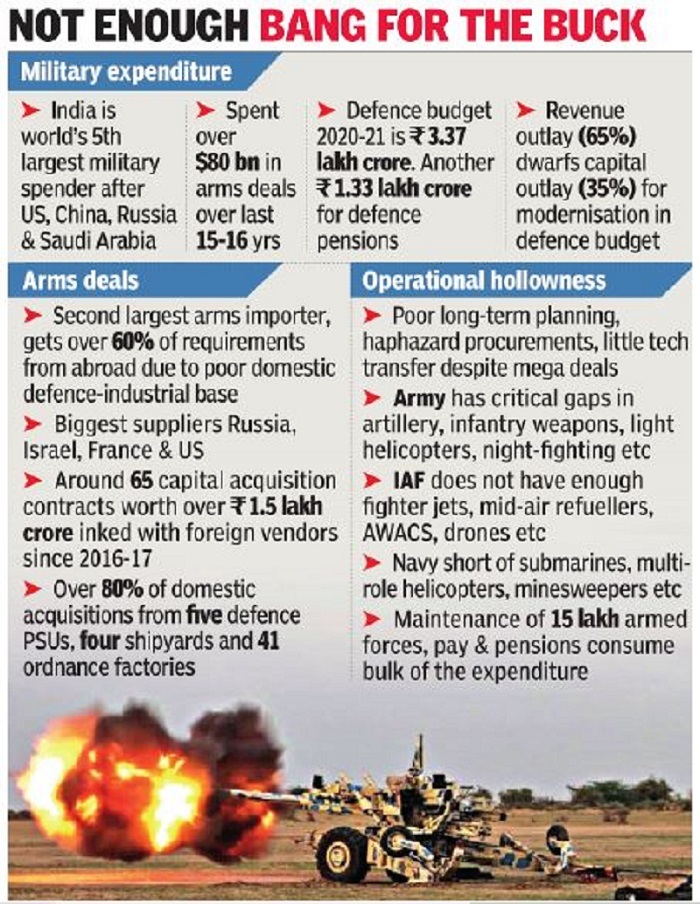 Russia remained the largest supplier of weapons to India in 2010-14 and 2015-19, but deliveries fell 47% and its share of total imports from India dropped from 76% to 56%. US imports UU., Which became the second largest arms supplier in India in 2010-14 as part of the growing strategic partnership, also decreased 51% in 2015-19. “By contrast, arms imports from Israel and France increased, by 175% and 715% respectively, making them India’s second and third largest supplier in 2015-19,” SIPRI said.

According to SIPRI data, China represents 73% of Pakistan’s arms imports, its all-weather ally, followed by Russia (6.6%) and Italy (6.1%). The United States, which previously supplied 30% of the weapons imported by Pakistan, fell to only 4.1% in 2015-19 after it decided to suspend military aid to the country.

The shameful continuation of India at the top of the world classification of arms imports reinforces the persistent failure to build a strong industrial defense base, with the NDA government policy “Make in India” has not yet taken off to produce submarines diesel-electric, combatants, light utility helicopters, minesweepers and infantry fighting vehicles for the past six years, as previously reported by TOI.

But India’s arms exports have certainly rebounded. Indian official figures show that they jumped from Rs 2,060 crore in 2015-16 to Rs 10,746 crore in 2018-19. The figure for 2019-20 stood at Rs 5,883 crore on December 31 of last year. Last week, Defense Minister Rajnath Singh said the government had set an arms export target of $ 5 billion over the next five years. This, of course, will take some work.