(Sister, where do you come from?) It probably took 3-4 seconds to recite this prayer if you know Hindi, the seven words and none of them more than two syllables.

TOI took this task to Abhishek and his friends, class 4 students from an NCR government school, while walking home, about a kilometer away. They laughed at what a teacher had said to one of them in class earlier in the day. When asked if he could read aloud a couple of sentences in Hindi, Abhishek was more than happy to step forward while a senior came running after us, telling him it was a “survey” and that he should do it. best possible.

Abhishek, whose mother tongue is Hindi and speaks the language fluently, received four sentences to read, the first of which was the sentence mentioned above.

He began to read, not word for word, but letter for letter, marking the vowels. ”
Baha-na, behan … ta ke aage oo, you…” and so.

Abhishek, a class 4 student, reads letter by letter, instead of word by word

It took him 30 seconds to reach the last letter, but the words still didn’t sound good or make sense, even to him, although he speaks the language at home and with his friends.

Last month, a Ballari government teacher in northern Karnataka was suspended for posting an online video of a class 2 student struggling with one word: ‘
pakkalebu’, Which means ribs. For three minutes, the boy struggles to break the word and string the syllables, while the teacher makes fun of him and hits him with a stick.

Abhishek’s words make no sense even to him.

These children with learning problems are no exception, they represent half of the school population at their age in the country. According to 2018 data published recently by the United States Agency for International Development (USAID), the fluency of oral reading in the mother tongue in Class 2 is zero for 76% of students in Uttar Pradesh, 62 % in Rajasthan and 53% in Karnataka. USAID collected data from government schools in seven states, including Uttarakhand, Chhattisgarh and Odisha. Maharashtra obtained the best score, with 96% of students who achieved a certain level of proficiency in reading. 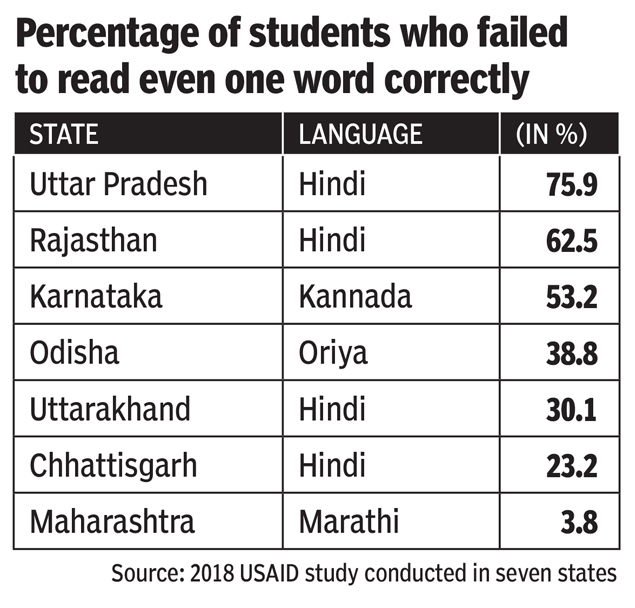 A zero ORF score indicates that the child cannot do any of this: translate letters into sounds, sounds into words, make connections, match words and meaning or intuit and fill in the blanks.

The findings are supported by the government’s National Achievement Survey (NAS), the Pratham Annual State of Education Report (ASER) and a recent World Bank report that has signaled a serious “learning crisis” in schools Government of the country. His conclusion: about 50% of children lack basic literacy and arithmetic skills despite spending five years in school. The World Bank report says that almost 55% of 10-year-olds cannot read or understand a simple text.

Without basic competence, 97% of school enrollment and solid attendance statistics would not make sense. Abhishek, with whom TOI spoke, in fact, said he enjoyed school although he did not choose a favorite subject. “School is fun since all my friends study here. All topics are good, ”he said.

Across India, 25 million children are admitted to Class 1 every year and according to this bleak prognosis, 17-18 million of them will not be able to do basic math or read in five years. In 10 years, this lagged group would have increased to 100 million and many of them would have joined the workforce, becoming part of the so-called “demographic dividend” of the country.

A large proportion of the students currently in primary school, estimated at more than Rs 5 million, have not reached basic literacy and arithmetic.

The draft of the National Education Policy 2020 admits the same: “… A large proportion of students currently in primary school estimated to exceed Rs 5 million, have not reached basic literacy and calculation … If no action is taken soon, in the next few years, we could lose Rs 10 million or more students of the learning system to illiteracy. ”

The “highest priority” of the policy, which is expected to be presented to the Union cabinet soon, is fundamental literacy and arithmetic for all by 2025. Education experts say this will require concerted efforts over the next decade. more or less, given the challenging numbers in hand.

Although we have achieved the universalization of education, the result of learning is appalling and has not improved in 14 years.

Ashish Dhawan, founder and president of the Central Square Foundation

“While we have achieved universal education, the result of learning is appalling and has not improved in 14 years,” said Ashish Dhawan, founder and president of the Central Square Foundation, a nonprofit organization that works in education school. “Learning breaks down early. ASER reports show that in class 3, 75% of students cannot do simple math calculations or read a class 2 textbook. The upper quartile is essentially middle class and upper middle class children who go to schools private. “The problem is only aggravated for the students left behind, which makes it difficult for them to catch up, he says.” If you cannot read, you cannot process the curriculum thereafter. If you can’t do basic mathematical operations, you can’t do fractions and algebra. ”

Ashok Kamath, president of the Akshara Foundation, thanked the emphasis on fundamental learning, but said efforts should be intensified from the student’s home. “With a potential of 100 million children who finish school without basic learning, we cannot afford to underestimate the problem. It has to be a remodeling in the classroom, community and home. ”

With a potential of 100 million children who finish school without basic learning, we cannot afford to underestimate the problem. It has to be a remodeling in the classroom, community and home.

The organization worked with 4.5 million government elementary students in Karnataka, helping them negotiate math with a kit that included games on smartphones. “In six years, students have achieved a 10% advantage over others in the state. Our method has been to train teachers and involve the community in the performance of schools. It is also important what the child does at home, since not all parents can read and write. So our last part was the building blocks, which are about 250 games on smartphones in which we also try to immerse the child in a learning environment at home. ”