Leave the flu: a Spanish lady killed 14 million in British India a century ago | Mumbai News

Mumbai, June 1918, was a cozy place for a killer virus. In addition to being overcrowded, with a large working-class population living in conditions favorable to diseases, the city also offered a dusty share of urban real estate in which the rain was absent and diseases such as cholera, smallpox and plague so rampant, they were officially categorized as “ordinary epidemic diseases”. Then, perhaps it was inevitable that the vile “Spanish Lady”, as some books refer to the forgotten and deadly world pandemic of the Spanish flu that is said to have killed nearly 50 million, would land at the Bombay docks at the end of May 1918 and devour babies and the elderly within a month that newspapers began to refer to as “The Influenza of Bombay” or “The Fever of Bombay”.

Unlike the plague, cholera and smallpox – “Spanish disease”, as Europe called the epidemic then – entered Bombay “like a thief in the night”, in the words of JA Turner, then a city health officer. On June 10, 1918, seven police cipayos at the Bombay docks were admitted to the police hospital with “non-malarial” fever. Soon, the employees of a shipping company, the Bombay Port Trust, the Bank of Hong Kong and Shanghai, the telegraph office, the mint and the Rachel Sassoon mills, all became ill. Around June 24, Bombay was paralyzed by the epidemic whose symptoms were fever, pain in limbs and bones, bronchial inflation with congestion, eye pain and a feeling of “feeling flat.” 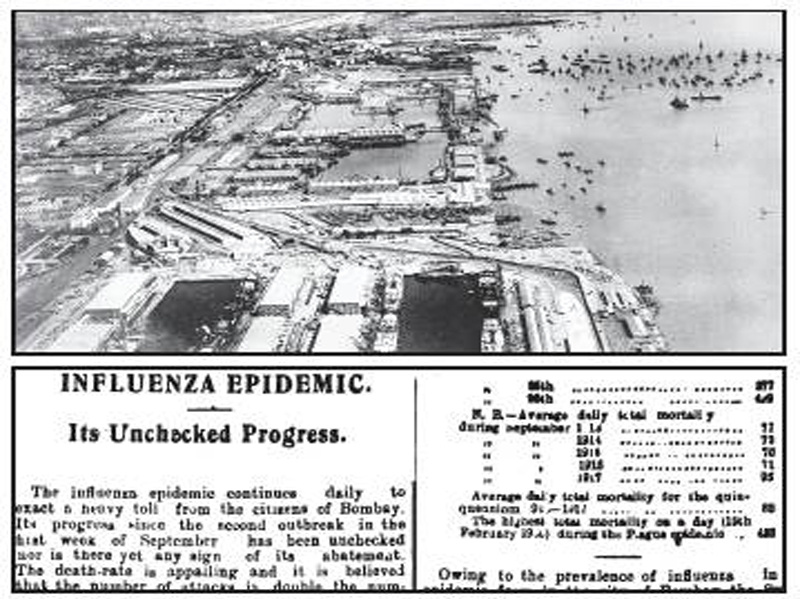 Days after his arrival, the “Spanish Lady” doubled the death rate in Mumbai and the cause given by the sudden increase in mortality was “respiratory disease.” Although it lasted four weeks before moving to Punjab and Uttar Pradesh, the Spanish flu, which was possibly named after the uncensored Spanish press published reports of the disease that spread through war-torn Europe, claimed 1,600 lives in Bombay before that he retreated in July.

In September 1918, the Ganges began to shake with corpses when Bombay’s fever returned with manic revenge. Extending through the Mumbai Presidency, this virulent strain of the virus radiated to the north and east, claiming between 10 and 25 million lives in the country, approximately between a fifth and half of the world death toll. In its second wave, the Spanish influenza virus also addressed people between 20 and 40 years old. Sidin Vidukut, author of the novel ‘Bombay fever’, wrote that more Indians died than soldiers and civilians combined in World War I.

Railway lines transported the virus far and wide. Cities suffered more than rural areas. “All interest in life has ceased,” Mahatma Gandhi wrote, surprised by the fever that left him unable to speak or read as he ascended as a leader.

Later, an injection prepared in Assam supposedly immunized thousands. While the second wave withdrew in December 1918, some reports suggest a third wave in India in early 1919. A 2012 study suggests that almost 14 million Indians in parts of India controlled by the British had died in the pandemic. .