Rumita Patel
|  Mar 6, 2020
NEW DELHI: Japan issued a statement to India asking it to review its decision to cancel all electronic visas to Japanese citizens. Apparently annoying because it has been hit with countries like Iran, Italy and South Korea, Japan has transmitted to India that a general visa ban will hurt economic commitment to India, including work on the Ahmedabad-Mumbai bullet train, which It has a 2023 deadline.

Japan, in fact, has also asked India to at least not block visas for Japanese engineers and other workers directly involved in the work of the bullet train. ToI has learned that the Japanese authorities are trying to approach both health minister Harsh Vardhan and foreign minister S Jaishankar to emphasize before them the need to have an “objective” view of the situation. 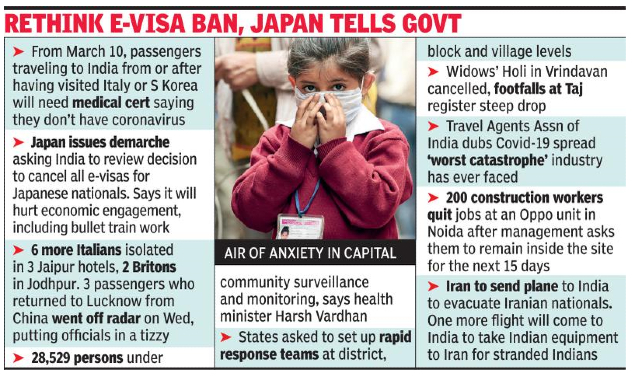 India has canceled all electronic visas for citizens of Japan, South Korea, Italy and Iran, as it works to prevent the spread of the coronavirus.

However, Japan has told Indian authorities that while South Korea had 5328 cases of infection, Italy 2502 and Iran 2336, Japan was only dealing with 284 cases as of March 4, 2020, according to WHO. Japan also helped India evacuate 119 Indian citizens last week aboard the Diamond Princess cruise ship infected by Covid-19.

Indian government sources said they were working to address the concerns raised by Japan. “Its people are worried that if they leave the country, they will not be allowed to return. But as we have said, they can still apply for visas with the Indian mission,” a source said.

There are more than 1400 Japanese companies active in India. Japan also wants India to consider cases involving relatives of Japanese workers, since they cannot visit Japan for fear of not being able to return to India.

While India has said that Japanese citizens can still apply for an embassy visa in Tokyo, it seems easier said than done. “There is indeed a ban on all visas since visa officials are reluctant to issue any visa taking into account the scare of the coronavirus,” said a source who declined to be cited.

The visa ban has been a surprise to the Japanese authorities, as India considers Japan as perhaps the most important partner for its economic transformation. As the MEA says, Japanese ODA supports India’s efforts for accelerated economic development, particularly in priority areas such as energy, transportation, environmental projects and projects related to basic human needs.

In addition to the Mumbai-Ahmedabad high-speed railway, Japan is also helping India build the western dedicated cargo corridor (DFC), the Delhi-Mumbai industrial corridor with twelve industrial municipalities and the Chennai-Bengaluru industrial corridor (CBIC). All of them are seen by the Indian government as emblematic projects that can transform India in the next 10 years.