NEW DELHI / SRINAGAR: days after the NIA arrested a Jaish worker who was driving the suicide bomber from Pulwama to the scene of the attack, a father and daughter duo landed in the agency’s network for allegedly facilitating and sheltering terrorist conspirators involved on February 14, 2019, a strike that killed 40 people from the CRPF. 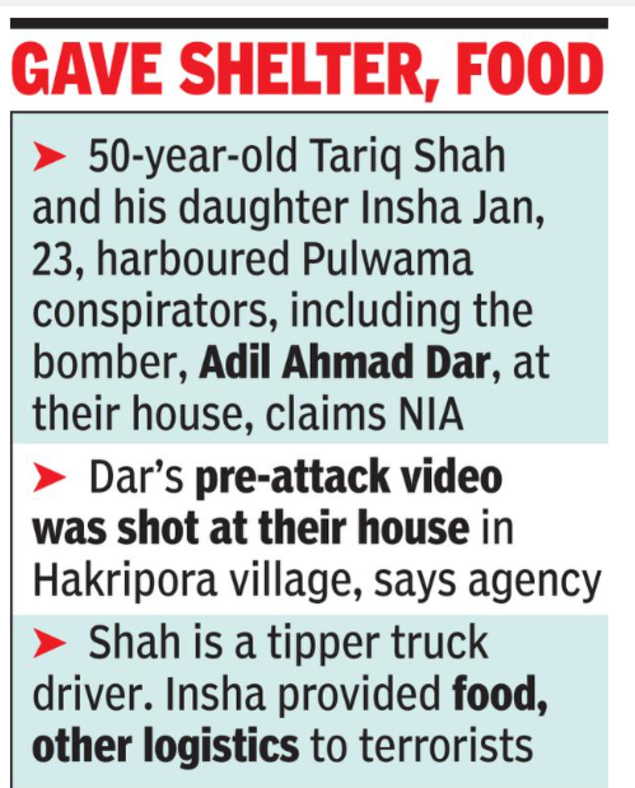 The NIA said Tariq Shah, a dump truck driver in southern Kashmir, admitted that his Hakripora home was used to protect terrorists while planning the attack on the CRPF convoy. It was at his home where Dar’s video, released by Jaish after Pulwama’s attack, was recorded before the attack, the agency said.

Insha Jan provided the terrorists with food and other logistics during their stay in 2018-19 on more than 15 occasions, each two to four days, the NIA said.

The initial interrogation revealed that Insha was in constant contact with Umar Farooq, Pakistan’s FDI manufacturer, and was in communication with him by telephone and social media platforms, the agency said.

Tuesday’s arrests came just after the first breakthrough with the arrest of the worker of Jaish Shakir Bashir Magrey, a Hajibal resident in Kakapora, Pulwama. Magrey, according to the NIA, had taken Adil Dar to a point 500 meters from the site of the attack. He also helped secure the material for the IED used in the attack and is said to have ordered ammonium powder, batteries and gloves from Amazon.

According to sources, the Shah family composed of Tariq and Insha had previously given refuge to Abu Dujana, the Pakistani murdered commander Lashkar-e-Taiba, during 2017-2018. They added that Tariq Shah was involved in the transport of terrorists from the Wagah border and was the main conduit of funds for terrorists operating in the Kashmir valley.

Dujana was killed near Hakripora, 13 km from the city of Pulwama on July 13, 2018, after he defected from Insha and developed a relationship with another woman in a nearby town. It is also believed that Insha informed the police about Dujana’s presence in that house with another woman.

Reports say the NIA, accompanied by the police and the CRPF, raided Tariq Shah’s residence early Tuesday. Both Tariq and Insha were taken to the nearest police station before being handed over to a NIA team.