NEW DELHI: Truck drivers and fleet owners disburse around Rs 48 billion rupees per year as bribes to traffic or highway police, in addition to personnel from transport and tax departments, according to a study conducted in 10 major centers of transport and transit. Even local groups like “puja samitis” extort truck drivers before allowing them to cross informal checkpoints, with a quarter of the drivers paying them in cash.

The study conducted by SaveLife Foundation, a non-profit organization, said that more than 82% of respondents had admitted to bribing “officials of one or another department along the way” during their last trip, revealing unbridled corruption in the sector. The survey results are based on detailed interviews of 1,217 truck drivers and 110 fleet owners. 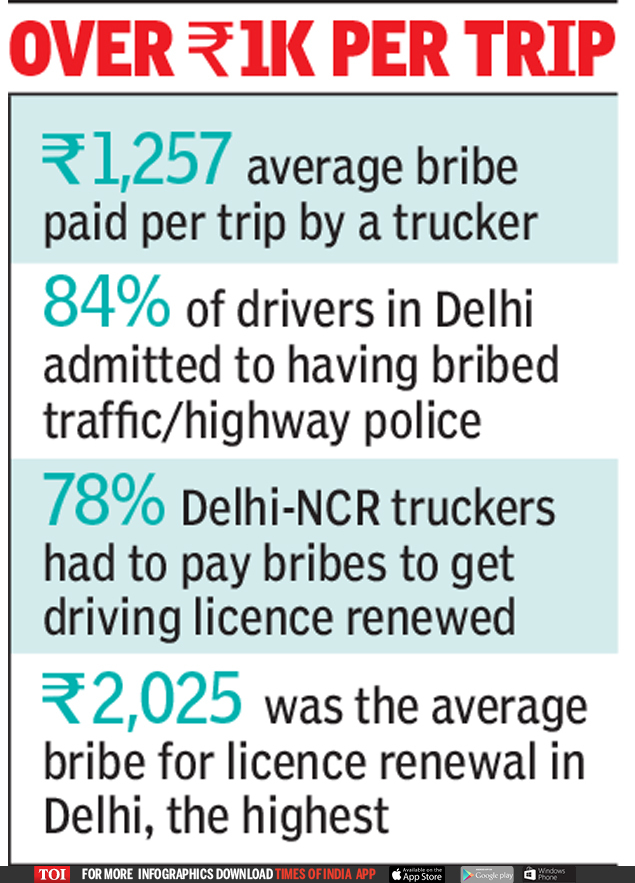 In general, the amount paid as a bribe for each trip to several authorities was estimated at Rs 1,257.

The report published by the junior minister of road transport, V K Singh, said that at the level of all India, two thirds (67%) of the drivers admitted to bribing traffic or road police personnel on the road.

Among the selected transportation centers, Guwahati had the worst indicator, where 97.5% of drivers claimed to have paid bribes, followed by Chennai (89%) and Delhi (84.4%).

For truck drivers, bribing RTO officials was also an unwritten rule, with almost 44% of respondents in all these centers confirming the same. In Bangalore, its participation was 94%, followed by 93.4% in Guwahati. The report has also cited examples of how government officials deployed on the roads devised mechanisms, such as issuing special slips to drivers after charging the bribe amount. They just had to show the receipt at the next checkpoint for a smooth step.

The report has exposed how a large part of the drivers (47%) admitted having paid bribes for the renewal of their driver’s licenses. The maximum, almost 93%, of Mumbai respondents said they had to pay a bribe for this, followed by Guwahati (83%) and almost 78% of Delhi-NCR respondents made similar claims. While on average a driver paid 1,789 rupees for the renewal of the license, in Delhi the amount of the bribe was the maximum of 2,025 rupees.

Even 43% of fleet owners claimed to have paid bribes (average of 1,360 rupees) to the transport department for the registration of their vehicles.

By admitting that the payment of bribes has become synonymous with the truck business, Singh said that when they used to put checkpoints to count the number of vehicles for evaluation, each truck driver showed a ticket in the window. “They always thought it was the checkpoints of the transport departments. We had to tell them not to worry, ”he said.