Home | India | Top Headlines | The government is not in contact with consumers: Minister of Finance

The government is not in contact with consumers: Minister of Finance

NEW DELHI: Finance Minister Nirmala Sitharaman criticized state banks on Wednesday for lack of consumer connection and said that branch level executives often could not communicate in the local language or provide details of government schemes .

The minister’s outbursts at an event to unveil the next phase of the public sector banking reform plan, EASE 3.0, were triggered by repeated complaints from clients she received from across the country. It was a weird whip for PSB bosses and senior executives, reminding them that they had lost contact at ground level, something they were always known for.

“I’m going to say things that won’t be music to your ears. But I’m going to say it because we need introspection. Today, when people come to know me, there are often concerns about how, at the branch level, we can be a little friendlier.” , said Sitharaman, while urging major bankers to modernize their operations and motivate branch staff. 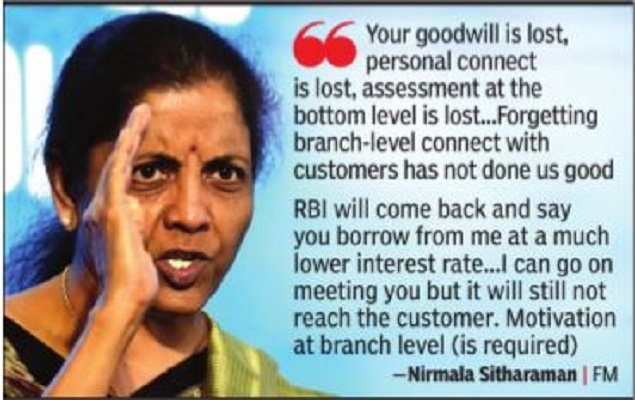 The statements came amid a slowdown in credit, which bankers have attributed to the overreach of the agencies for alleged fraud. Sitharaman once again tried to calm fears on this issue, saying that the government will protect genuine business decisions and that it has already implemented several measures to protect honest bankers. But he made it clear that banks must move forward with decision on loan proposals.

“It has to be a normal practice for those who want credit to obtain it. Those who approach you at the branch and tell you your requirements, follow the prudential rules, but attend to them. Tell them why you want to give them (a loan), tell them why you don’t want to give them. But tell them Be receptive… I will give you easy access and I also ask you to give the client easy access and to be that proud public sector banking official again, ”said the minister during her 25-minute speech.

He listed several areas that required immediate attention to improve performance at the branch level. For example, he said, there was excessive dependence on data from credit rating agencies and credit bureaus and branches no longer knew their clients well. “We have credit rating agencies and agencies that qualify different banking functions and, therefore, talk about the client and their creditworthiness. But they are not advice, they are only an indicator of what a customer is. Has there ever been a directive from the Reserve Bank or the IBA (Association of Indian Banks) to say that they will blindly follow the numbers of the rating agencies? Do not.”

The FM also stressed the need to motivate branch staff so that loans can receive momentum and government schemes can be implemented without any inconvenience. “The RBI will come back and say that you will borrow at a much lower interest rate, much lower than the repurchase rate … I can continue to meet you but it will not yet reach the customer. Motivation at branch level (required). ”

The minister also said that often the branch-level staff was not even aware of government schemes, resulting in poor implementation. “General Gyan in government schemes is not as before. There are probably people at the branch level who do not even know the schemes that are being implemented at that branch in that particular area. Let’s do an introspection, please. It cannot be that the government wants to ensure that there is inclusion, it cannot be that the government wants the money to reach the poor, but the prevailing instrumentality through which money has to go only for lack of information cannot move forward It can’t be that way, ”he said, urging bankers to find a solution, while acknowledging that they may be facing a labor crisis.