NEW DELHI: After two days of communal clashes that claimed 27 lives, on Wednesday there was a fragile silence in parts of northeastern Delhi, but there was violence elsewhere with burning shops and the body of an IB staff member found In a drain.

While the police carried out flag marches and security personnel stretched across the northeast corner of the national capital in an attempt to calm the violence that had been unleashed since Sunday, Prime Minister Narendra Modi in his first reaction called for peace and brotherhood.

In stating that it was important to restore calm as soon as possible, Modi said on Twitter: “I had an extensive review of the situation prevailing in various parts of Delhi. The police and other agencies are working on the ground to ensure peace and normalcy. “.

I had an extensive review on the situation that prevails in various parts of Delhi. The police and other agencies are working … https://t.co/dEDZ6b2Fsx

“What happened, happened. Inshallah, there will be complete peace here,” he said as he walked through the mostly mixed neighborhoods and congested streets of northeast Delhi and met with the locals. 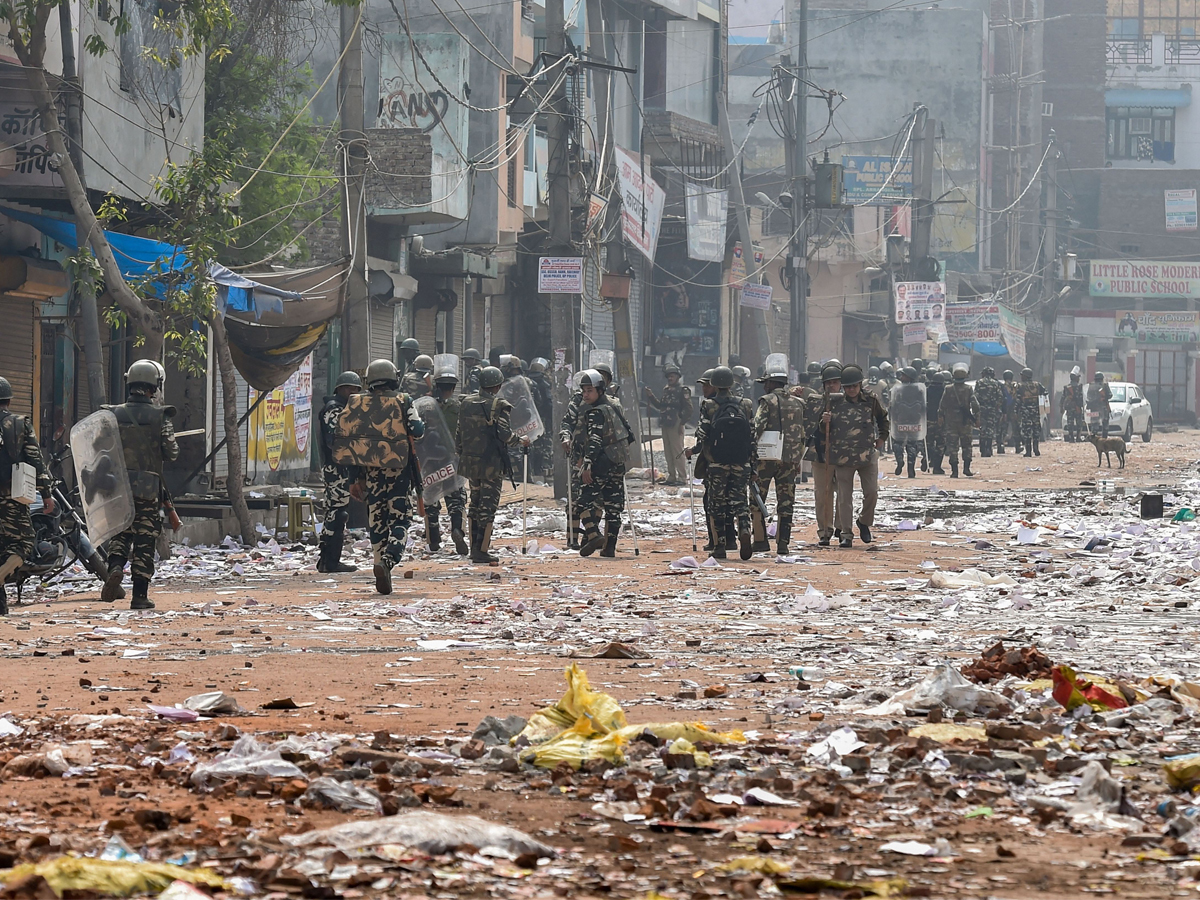 On Tuesday, he made a night tour with the Delhi Police Commissioner Amulya Patnaik and the newly appointed Special Commissioner SN Shrivastava.

Shrivastava’s appointment came after Patnaik faced criticism for not curbing the spiral of violence in the context of the visit of US President Donald Trump, sources said.

Delhi police said they arrested 106 people for their alleged involvement in the violence and registered 18 FIRs. 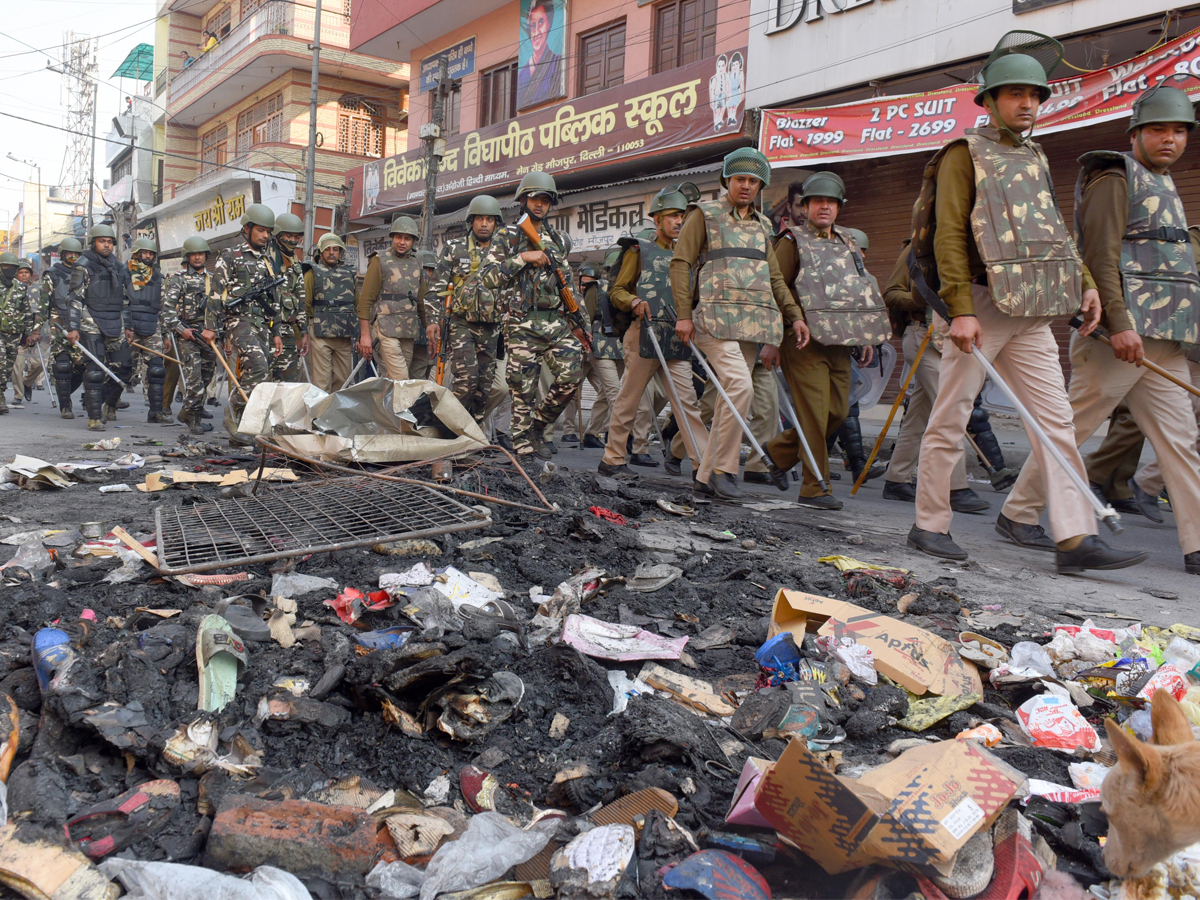 On the third day of the problem, the death toll rose from 13 on Tuesday to 27 on Wednesday.

“The death toll has increased to 25,” said GTB Hospital Medical Superintendent Sunil Kumar. Unusually, the estimate of more than 200 wounded and dead did not come from the police but from the hospital authorities. 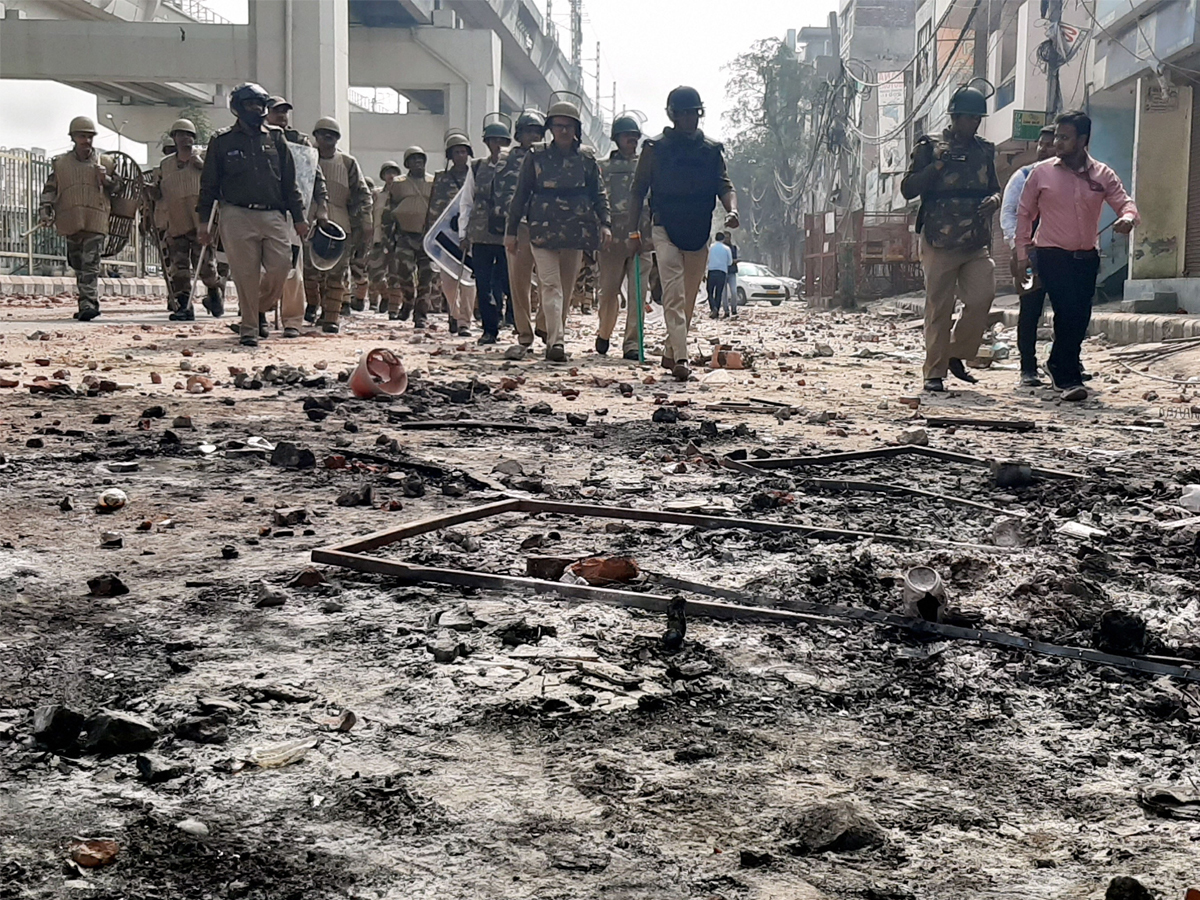 Calling “alarming” the situation in northeastern Delhi, Prime Minister Arvind Kejriwal said the Army should be called as the police “cannot” establish control.

I have been in contact with a lot of people all night. Alarming situation. The police, despite all their efforts, cannot … https://t.co/MhF67GLOof

The secretary general of the PRC, Sitaram Yechury, described the violence in Delhi as a “chilling reminder” of the Gujarat riots in 2002 and demanded that the Army be called to control the situation. Prime Minister Arvind Kejriwal visited northeast Delhi on Wednesday, affected by the violence. According to an official, the prime minister also visited the office of the deputy commissioner of police (northeast). He was accompanied by Deputy Chief Minister Manish Sisodia and the leader of the AAP, Sanjay Singh.

At the Legislative Assembly of Delhi, Kejriwal said that the common man of Delhi did not surrender to violence and claimed that outsiders, some politicians and antisocial elements were behind.

He also announced a compensation of Rs 1 crore for the family of Rattan Lal, the Delhi police chief who lost his life in violence. 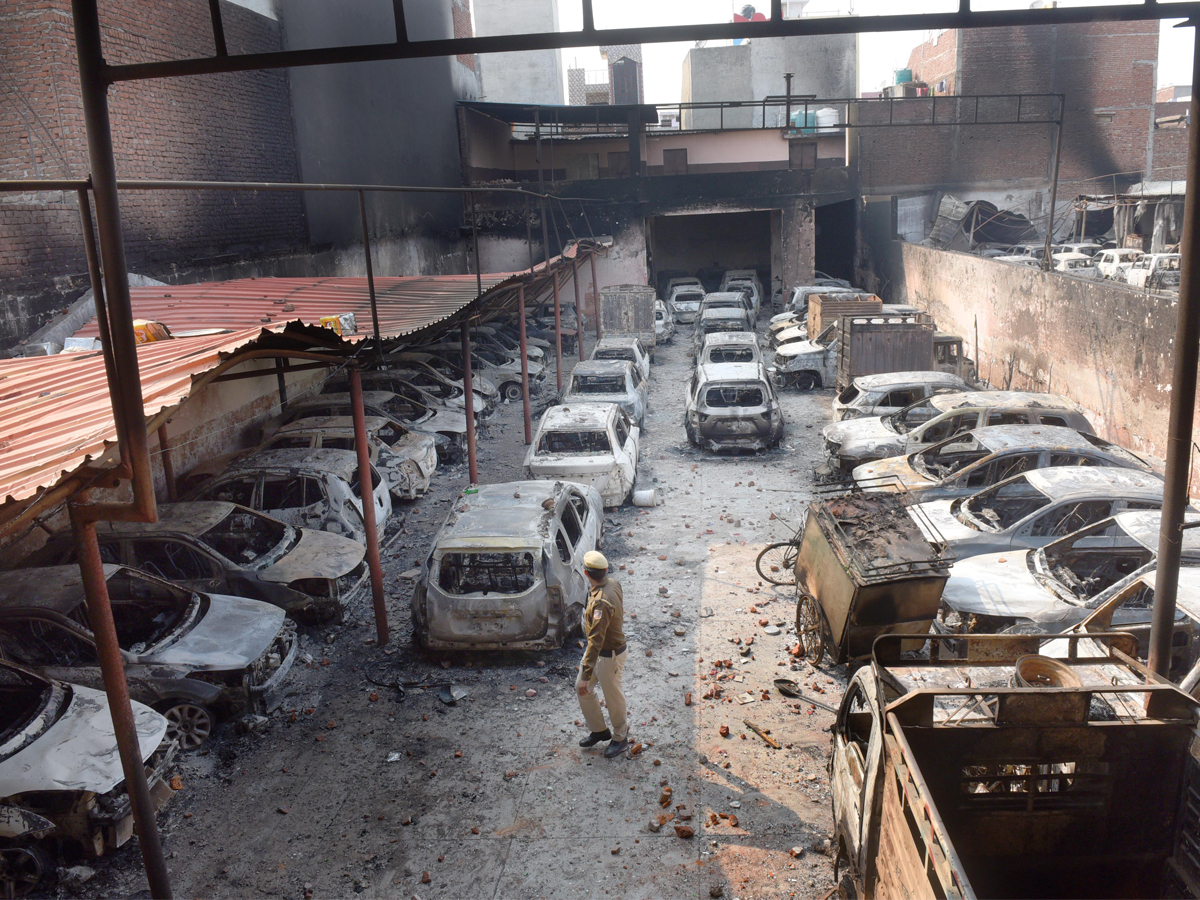 Kejriwal, along with his deputy Manish Sisodia, later visited the areas affected by the violence.

Far from “talking about the leader,” fear floated like a heavy cloud over the area, plagued by the detritus of a riot: shattered and charred vehicles, bricks, stones and jagged glasses.

The Intelligence Office employee was found dead in a drain in Chand Bagh, where he stayed. Sharma may have been killed in the throwing of stones, authorities said.

Shops and schools were closed and many streets deserted with police making announcements that no one should leave their homes.

Authorities said the CBSE class 12 English test on Thursday was postponed in northeast and eastern parts of Delhi in view of the turbulent situation due to violence.

There was a strong deployment of force in Chand Bagh with security personnel that did not allow anyone to leave.

The blackened walls of a ‘mazaar’ in the town talked a lot about the violence of the previous day.

In Ashok Nagar, a mosque was destroyed and set on fire by malefactors, a day before. Tents outside the mosque, belonging to Hindus and Muslims, were also burned.

After two days of mobs wandering uncontrollably through the streets, looting shops and setting fire to the property, the restless silence was a respite.

In Gokulpuri, for example, the smoke darkened the skies with burning troublemakers.

Meharban, in his thirties, was allegedly beaten by a crowd in the Chand Bagh area and then thrown into the drain.

“I went to buy flour. The people there asked if I was a Muslim and then started beating me. Then they threw me into the Chand Bagh drain,” he said.

The incident occurred around 2.30 p.m. Meharban, who suffered head injuries, could barely speak, was taken to a hospital in a PCR truck.

Their livelihoods lost with their shops ransacked and their children in a state of panic after witnessing the bloodshed, many people were seen leaving their homes. Among them was a family that promised to return, but said he didn’t know when.

At the GTB Hospital, many grieving relatives waited to collect the bodies of their loved ones.

When asked if the victims had been identified, the GTB Hospital Medical Superintendent said: “Many people have been identified, some are not yet.” He, however, refused to disclose the identity of the deceased.

Patients have several types of injuries, including gunshots, stones and other weapons, and many were injured while jumping off the rooftops to escape the protesters, hospital officials said.

The “surge” of injured patients had been reduced to a drip.

The injured told horrible stories of violence they witnessed and how they managed to escape the deadly violence.

The magistrates of the northeastern districts and Shahadra districts accompanied by senior officials of the Department of Revenue and the Delhi Disaster Management Authority (DDMA) were also the hospital to assess the situation.

By blaming the center and the government of Delhi for the violence, perhaps the first time since 1984 that the city has seen scenes of communal chaos, Congress President Sonia Gandhi called for the resignation of Interior Minister Amit Shah.

“The conspiracy was witnessed during the Delhi polls and the BJP leaders gave hate speech creating an atmosphere of fear and hate,” he said.

The fight continued with the BJP, in turn, accusing Gandhi of politicizing violence.

“The violence is ending. The investigation is underway to discover the truth and identify the culprits … At that time, attacking the government and politicizing violence is a dirty policy,” said Union Minister Prakash Javadekar, and added that it also demoralizes the police.

That was also a concern of Attorney General Tushar Mehta, who asked a bank of the Supreme Court not to make any adverse observations related to the violence, since it will demoralize the police force.

A trial court of judges SK Kaul and KM Joseph lashed out at law enforcement agencies for allowing “instigators of violence” to escape and said they should act according to the law without waiting for someone’s assent.

“If someone makes an inflammatory comment, the police must take action,” he said.

“… We should never allow another 1984 … especially under the supervision of the court and under its supervision (of the Delhi Police) … We have to be very, very alert,” a bank of judges S Muralidhar and Anup J Bhambhani said.

At a midnight hearing, the Delhi High Court ordered the police to ensure the safe passage to government hospitals and emergency treatment for those injured in community violence broke out in northeast Delhi over the modified citizenship law.

I cannot repeatedly say that people have the right to protest, but without blocking the roads: SC in Shaheen Bagh | India News