Paramilitaries in northeastern New Delhi, where the number of victims increases to 13 | Delhi News

NEW DELHI: Even when the president of the United States, Donald Trump, was finishing his visit to India on Tuesday night, the government had finally realized the serious situation in northeastern Delhi, where violence was out of control for the third consecutive day, pushing the death toll to 13.

The strong deployment of Delhi police personnel and paramilitary forces such as Rapid Action Force and CRPF was visible in the disturbance zones amid announcements that sight shots had been issued and curfew was imposed, although there was no official word about it. About 35 companies of the armed central police were deployed in the affected areas.

These events followed a meeting that Interior Minister Amit Shah held with Lieutenant Governor Anil Baijal, Prime Minister Arvind Kejriwal and representatives of key political parties to assess the situation. The meeting was also attended by police commissioner Amulya Patnaik and senior officials of the Ministry of Interior. Kejriwal, meanwhile, had held a meeting of his own and had been given a call for peace in Rajghat. 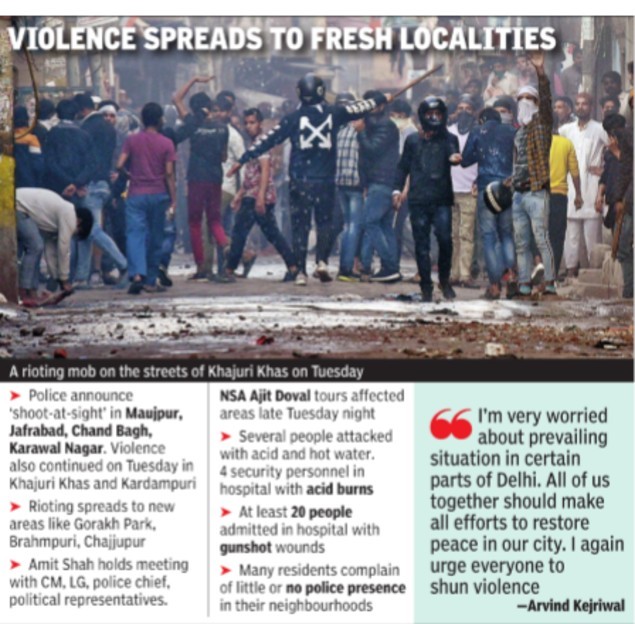 It was evident from the early hours of Tuesday that the violence only worsened with reports of nocturnal incidents of vandalism, arson and stone throwing. Eight more deaths testified to the intensity and cruelty of communal riots. The entire area remained under violence control throughout Tuesday and even mediators were attacked for doing their job.

In the Maujpur-Jafrabad road area, there were random shots from the rooftops for the first time, so it is quite risky to move through the streets.

In total, more than 200 people, including protesters and bystanders, were injured and more than 100 vehicles burned and damaged. At least 20 people admitted to different hospitals have gunshot wounds, sources said. The autopsy of police chief Ratan Lal has revealed that he was also shot dead by protesters: a bullet pierced his left shoulder and pierced his heart. However, the condition of DCP Amit Sharma, who was seriously injured, has improved.

Dr. Sunil Kumar, medical director of the GTB Hospital said
TOI that 13 people died from injuries. Some of them have been identified as Vinod Kumar, Nazim, Shahid Khan, Rahul Solanki, Furqan, Deepak, Mudasir and Ishtiyak. The identity of the rest has not yet been revealed.

Later, prohibitive orders were imposed under Section 144 in approximately a dozen areas. The police have also issued orders prohibiting the dissemination of provocative material related to riots on any media platform. Eleven FIRs have been registered and two dozen people have been identified and detained, police said.

On Tuesday, the first reports of violence arrived near the Brijpuri area in New Mustafabad, where the locals panicked when they heard gunfire early in the morning. This was followed by the throwing of stones in many areas, after which the police took strong action. This, however, did not stop incidents of arson and theft. Smoke fluttered in the air and mobs roamed the streets without control, burning shops, throwing stones and threatening the locals. At noon, the Chand Bagh and Kardampuri areas were severely affected and the latter witnessed more than three hours of continuous stone.

The rioters damaged two shots of fire in Gokulpuri and frantic crowds that raised incendiary slogans set on fruit carts, rickshaws and everything that crossed in Maujpur, epicenter of the problem and other places. Police and security personnel fired tear gas shells to disperse protesters who were armed with stones, bars and even swords. Many wore helmets. Around 5 pm, security personnel were thrown with stones at Chand Bagh. They chased the mafia, only to be attacked by some people armed with gasoline bombs. In the afternoon, the streets were full of shattered remains of burned vehicles, bricks and tires.

At dusk, flag marches were held in Bhajanpura, Khajuri Khas and other places to control the situation. Five stations on the Pink Line of the Delhi Metro closed for the second consecutive day.

Residents of many areas complained about the absence of police personnel. “There is no police presence in our area. The rioters ran around menacing people, tearing up shops. Many of us needed to be evacuated, ”said a Jafrabad resident.

Meanwhile, security in the neighboring cities of Noida and Ghaziabad has been reinforced. While the border between Delhi and Ghaziabad has been heavily barricaded and all vehicles are being thoroughly checked, the routes through DLF Pushta Road, Lal Bagh and Loni have been sealed, said district magistrate Ajay Kumar Pandey. “Residents have been advised to avoid these routes to go to Delhi. Section 144 is already implemented in the district, ”said Pandey.

Ghaziabad’s SSP, Kalanidhi Naithani, said police have raised “double barricades”, one hundred meters from the road leading to Karawal Nagar violence in Delhi. IG Meerut Praveen Kumar, who was in Ghaziabad, inspected the security arrangements and asked Naithani to secure the border. “More than 5,500 police officers are on high alert. More than 500 Twitter accounts and 800 Facebook accounts are under the radar of a cyber cell team, “Naithani said.

In Noida, too, security has increased and the police are monitoring social networks. Section 144 is already in place in G B Nagar. On Tuesday, senior officials evaluated control in border areas. Additional DCP Ranvijay Singh said vehicles are being checked to ensure no one crosses the border to participate in acts of violence.

CAA depends on India. I hope you make the right decision for your people: President Trump | India News