Rumita Patel
|  Feb 22, 2020
ROME / BEIJING: A dozen cities in northern Italy were in an effective closure on Saturday after the new virus linked to China claimed a first fatality in Italy and made a growing number of people who had no direct links with The origin of the virus.

Secondary infections led local authorities in the cities of Lombardy and Veneto to order the closure of schools, businesses and restaurants, and to cancel sporting events and masses.

An initial ordinance written by the health minister imposed an effective blockade in 10 cities around Lodi, southeast of Milan. But individual cities outside that central cordon area, such as Cremona, issued their own restrictions by canceling the school after confirming the cases.

The number of those infected was constantly changing, after Lombardy reported an initial quadruple of cases on Friday, which raised Italy’s total to at least 19. The authorities planned a press conference later on Saturday to give the figures more updated.

On Saturday, the Italian news agency ANSA reported a second death from the virus in the region of Lombardy, where Codogno is located.

The authorities called for calm, but acknowledged that the groups were alarming because people were being infected and had no known contact with someone directly related to China. The first man to be confirmed as infected had met someone who had returned from China but still has no symptoms.

Meanwhile, China reported a sharp decline in new deaths and cases of coronavirus on Saturday, but a doubling of infections in South Korea, 10 new cases in Iran and one death in Italy added to concern over its rapid spread and global reach

Mainland China had 397 new confirmed cases of coronavirus infections on Friday, compared to 889 the previous day, but only 31 cases were outside the epicenter of the Hubei province virus, the lowest number since the National Health Commission began to collect data nationwide a month ago.

But the number of infections continued to increase in other places, with outbreaks that worsened in South Korea, Italy and Lebanon and Iran, which prompted a warning from the World Health Organization that the window of opportunity to contain international spread is It was closing. 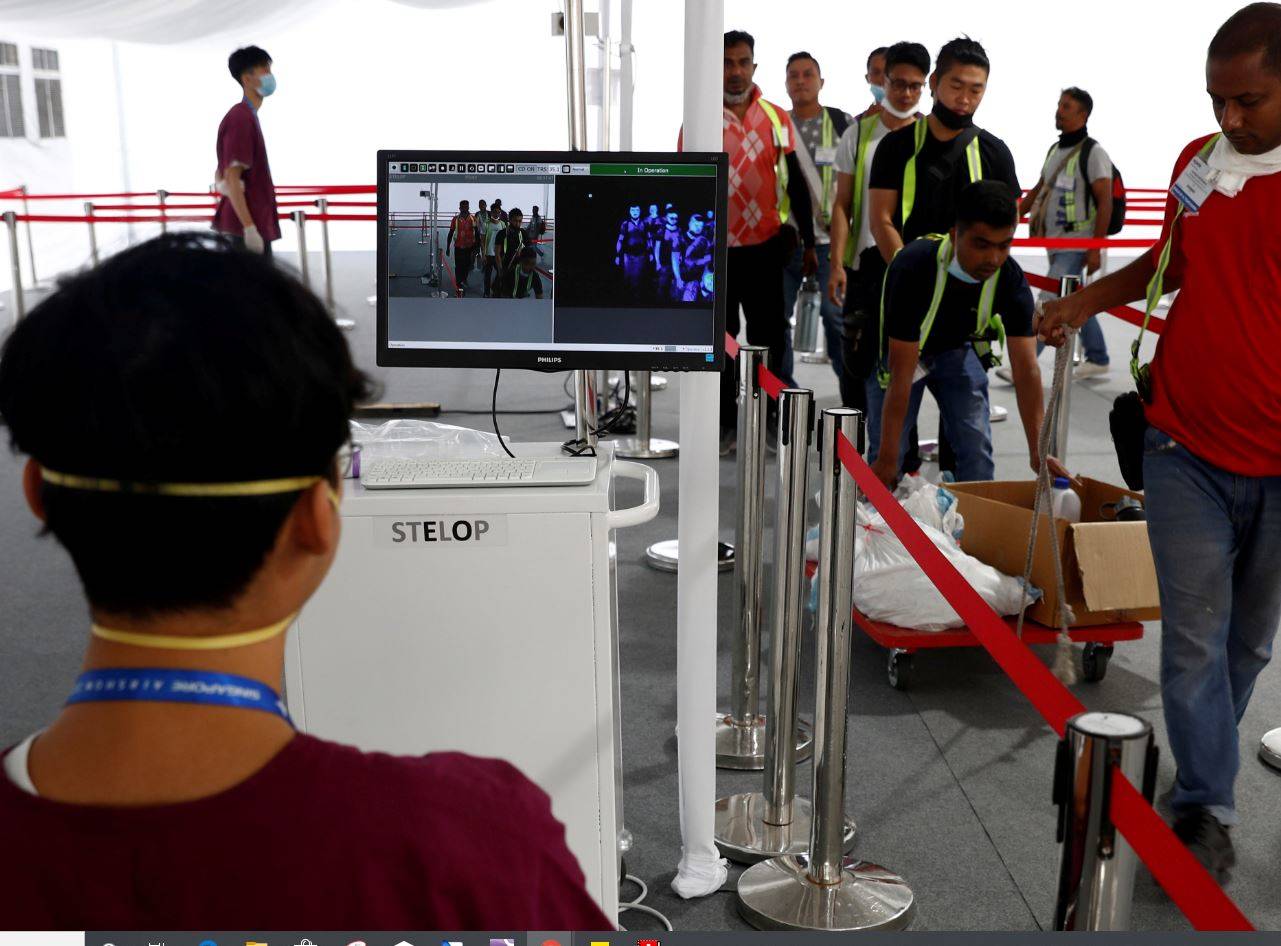 In compliance with the travel notice issued earlier in the wake of the deadly coronavirus outbreak, the government advised citizens on Saturday to avoid all non-essential trips to Singapore. Currently, passengers from China, Hong Kong, Thailand, South Korea, Singapore and Japan are examined at 21 airports designated in the country for possible exposure.

South Korea saw another increase in infections, with 229 new cases confirmed, bringing its account to 433. Officials warned that it could increase substantially as more than 1,000 people who attended a church in the center of the outbreak had shown symptoms similar to the flu.

Iran, which had not reported cases earlier this week, saw 10 new cases, one of which had died, bringing the number to 28 infections and five deaths. People are being treated for the virus in at least four different cities, including the capital, Tehran, where some pharmacies had already run out of masks and hand sanitizers. Other cities are Qom, Arak and Rasht.

The virus hovered over a national parliamentary election in Iran on Friday. Many voters went to the polls with facial masks.

The Ministry of Health spokesman, Kianoush Jahanpour, made Saturday’s announcement of the latest figures on state television, but did not specify when the fifth death occurred. Two people died on Friday from COVID-19, the disease caused by the virus. Authorities reported two deaths earlier this week.

Concerns about the virus weighed on US actions on Friday, driven by a previous increase in cases in China and data showing the stagnation of US business activity in February.

It has spread to about 26 countries and territories outside of mainland China, killing 13 people, according to a Reuters count.

WHO Director General, Tedros Adhanom Ghebreyesus, expressed his concern on Twitter on Saturday about cases that do not have a clear link with China and asked all countries to invest urgently in preparation. He called for $ 675 million to support the most vulnerable countries.

On Friday, he said that now was the time to act decisively.

Japan confirmed 14 new cases of coronavirus on Saturday, including a teacher who had shown symptoms while working at her school.

Japan faces increasing questions about whether it is doing enough to contain its spread, and is concerned if it could ruin this year’s Tokyo Olympics. The organizers postponed the start of volunteer training on Saturday as a precaution.

On Saturday, the governor of the Bank of Japan ignored the talks that the growing epidemic is triggering an outflow of funds from Asia.

The total number of confirmed cases in mainland China increased to 76,288, with a death toll of 2,345 at the end of Friday. Hubei reported 106 new deaths, of which 90 were in Wuhan.

But new, although isolated, findings about the coronavirus could complicate efforts to thwart it, including the announcement by the Hubei government on Saturday that an old man took 27 days to show symptoms after infection, almost double the alleged incubation period 14 days.

That follows Chinese scientists who report that a woman from Wuhan had traveled 400 miles (675 km) and infected five relatives without showing signs of infection, offering new evidence of asymptomatic spread.

State television showed on Saturday the arrival of the “blue whale” in Wuhan, the first of the seven river cruises it is bringing to house medical workers, tens of thousands of whom have been sent to Hubei to contain the virus.

Senior officials of the Chinese central bank tried to calm the concerns of global investors about the potential damage to the world’s second largest economy due to the outbreak, saying that interest rates would be guided downwards and that the financial system and currency of the country were resistant.

Chen Yulu, deputy governor of the People’s Bank of China, said policymakers had many tools to support the economy and were fully confident in winning the war against the epidemic.

“We believe that after the end of this epidemic, the cumulative demand for consumption and investment will be completely released, and China’s economy will recover rapidly,” Chen told state television.

Recently, China has reduced several key loan rates, including the loan reference rate, and has urged banks to grant cheap loans to the most affected companies struggling to resume production and running out of cash.

The transport ministry said the companies would resume larger-scale operations later this month and said more roads, waterways and ports were returning to normal.

Online media and Weibo users posted images and images on Saturday of the reopening of some shopping centers, including in the cities of Wuxi, Hangzhou and Gansu Province, with shoppers queuing in almost empty streets outside to Mandatory temperature checks while dripping customers with masks examined the luxury product stores and makeup counters.

Some analysts believe that China’s economy could contract in the first quarter of the previous three months due to the combined supply and demand shocks caused by the epidemic and strict government containment measures. Annually, some warn that growth could fall to half of 6% in the fourth quarter.

However, transportation restrictions remain in many areas and, while more companies are reopening, the limited data available suggests that manufacturing is still at weak levels, with disruptions beginning to spread to global supply chains.

Samsung Electronics said on Saturday that a case of coronavirus was confirmed at its mobile device factory complex in Gumi, which caused the closure of all its facilities.

The financial leaders of the Group of the 20 main economies were to discuss the risks to the world economy in Saudi Arabia this weekend.

Tedros of the WHO on Twitter said that 13 priority countries in Africa had been identified for help due to their direct links to China or the high volume of travel. That would include 30,000 personal protection kits on the road to six countries and 60,000 more for 19 states in the coming weeks.

Rahul Gandhi remains the "main leader" in Congress, a large part always felt that he should return as chief: Salman Khurshid | India News