Rumita Patel
|  Feb 21, 2020
Richa Chadha, who was last seen in the star of Kangana Ranaut ‘Panga’, appears in the news for the rumors of her wedding with boyfriend Ali Fazal. According to the latest reports, Richa and Ali are ready to get married in mid-April in Delhi. Now, the actress is ruling the headlines of the photo shared by her fan club.

Richa shared a photo posted by his fan club. It is a collage of his image and the late actor Smita Patil. The post was subtitled as, “ Smitten Patil 🥰🌹 # RichaChadha #SmitaPatil #Bollywood #resemblance #love #RichaChadhaFans ”. Your admirers and admirers have found the strange resemblance. Love fell in the comments section and praised the actress. Richa’s friend, Freida Pinto, commented: “ Two of my favorites in a painting. That is the perfect beginning of my day! @therichachadha ” 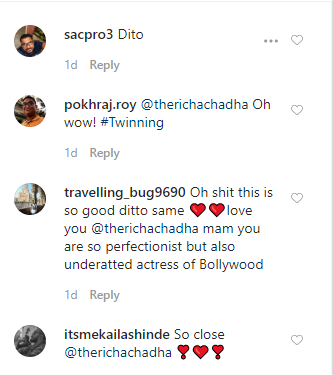 According to a report on an entertainment portal, a photographer based in Bengaluru approached the actress for a photo shoot to pay tribute to Patil’s work and talent. If the report is believed, Richa will recreate the appearances of several of Patil’s films, including Arth (1982), Bhumika (1977) and Mirch Masala (1987).

Meanwhile, at the front of the job, Richa will then be seen as the Chief Minister, directed by Shubhash Kapoor. The movie will hit the big screens on July 17. With Richa, the cast also features Akshay Oberoi, Shubhrajyoti, Manav Kaul and Saurabh Shukla.

One Hero, One Tree: a step towards protecting our world