BEIJING: The number of new cases of coronavirus reported by Hubei province declined dramatically after China changed the way it officially reports the number of infections for the second time in a month, raising questions about the reliability of the data of the epicenter of the outbreak.

In his daily count, Hubei said Thursday he had only 349 additional confirmed cases, compared with almost 1,700 additional cases the day before.

No explanation was given on the sudden decline, but it came a day after the new national guidelines recommended that the province only report two numbers in its general count: confirmed and suspicious cases, in line with the way they are reported. other provincial and national figures. Before that, Hubei had been reporting if new cases of infection were confirmed by CT scans or nucleic acid tests. This practice was in effect for only one week, and was the result of a methodology change made on February 13 that abruptly added almost 15,000 cases to its total count.

Changing classification patterns and lack of clarity on whether cases confirmed by CT scans are still included in the official Chinese count, forced another re-calculation of the contours of the crisis that has infected more than 70,000 and killed more than 2,000

There is a growing distrust of official data arising from China, which has the vast majority of cases and deaths from coronavirus worldwide, and it is suspected that the country’s officials are prematurely promoting a narrative that the outbreak is under control.

The National Health Commission and the provincial health commission of Hubei did not answer questions that sought clarity about the latest data.

“He points out a rather worrying confusion about the best way to officially report the number of cases, leading to a loss of confidence in the real numbers,” said Jeffrey Halley, a senior market analyst based in Singapore with Oanda Asia Pacific Pte “That could mean that internationally, the rest of the world keeps China locked up for longer, which will not be good for” V-shaped recovery “projections,” he said. 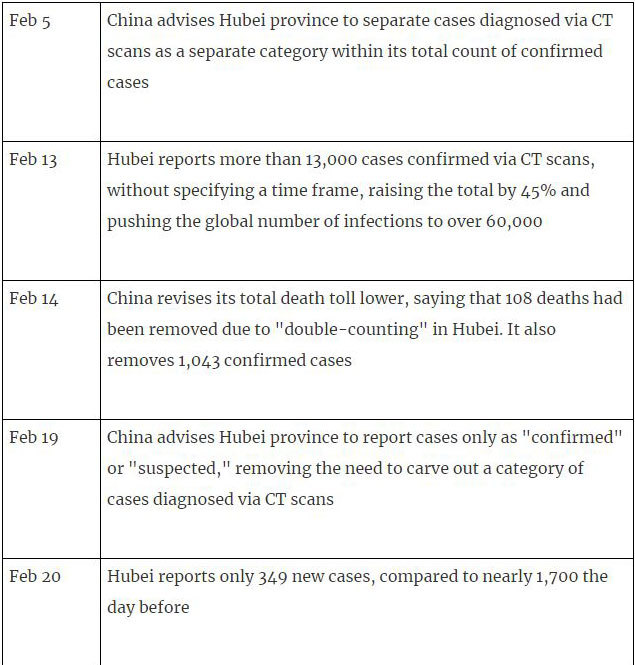 CT scans are an alternative method that doctors in Hubei have been using to detect signs of pneumonia in patients due to the lack of nucleic acid test kits that can identify the genetic sequence of the virus in patients. It was also known that the kits themselves threw false negatives.

In recognition of the insufficiency of the test kits, China advised Hubei Province on February 5 to begin including patients diagnosed by CT scans as a separate category within their general count. The province began doing so on February 13 in a crash adjustment that raised its total count by 45%.

A day later, the National Health Commission of China eliminated 108 deaths from its total number due to “double counting” in Hubei.

“It’s not normal for case definitions to change so often,” said Ben Cowling, a professor of epidemiology at the University of Hong Kong. “I imagine that the change in case definitions has led to a change in the practice of tests, that is, less use of the clinical diagnostic method through CT scans.”


The latest changes cast doubt on whether the fall in new cases, a positive sign that the epidemic is under control in the epicenter, can be taken to the letter. In recent days, China’s leaders have tried to project optimism about the outbreak, which has closed much of its economy and sunk industries from retail to aviation in crisis.

Companies and factories across China are now urged to restart economic activity, while Chinese Prime Minister Li Keqiang said Monday that the outbreak is in “a positive trend.”

Companies with problems in China are beginning to crumble under pressure, intensifying pressure on China’s leaders to underpin their overall economy. The government is considering direct infusions of cash or mergers to stabilize the airline industry, while the People’s Bank of China said it will work to support domestic consumption.

The Hainan government, the southern island province where the indebted conglomerate HNA Group Co. is located, is in talks to take control of the group after the contagion impaired its ability to meet financial obligations, according to people familiar with the plans.

In this climate, the latest methodology change in Hubei province is generating more questions than it answers.

“I think there may be genuine attempts to report as accurately as possible and this may only be a way to refine the figures,” said Vishnu Varathan, chief of economics and strategy based in Singapore at Mizuho Bank, Ltd.

“But the relevant point is that in this climate of uncertainty and opacity around what is happening, constant reviews can generate distrust, which in turn is amplified by social networks.”