The number of Indian students to whom the Canadian immigration agency granted them a study permit exceeded one lakh for the second consecutive year.

In 2019, Canada approved just over 4 lakh of study permits, of which 1.39 lakh or 34.5% were for Indian students, followed by Chinese who obtained 21% of the new study permits. In 2018, Canada had granted a total of 3.55 lakh of study permits: the figures recently published for 2019 signify a general increase of 13.8% over the previous year.

An analysis of the last three years shows that, although the number of Chinese students receiving a study permit has shown a tiny decrease, the influx of students from India is constantly increasing. 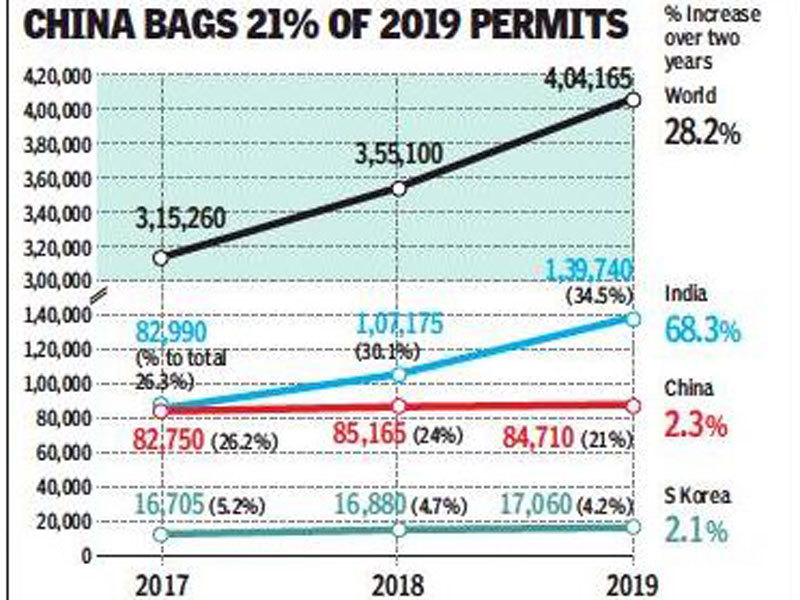 The number of Chinese students who will be granted study permits in 2019, at 84,710, was slightly lower than the previous year’s figure of 85,165. In contrast, the number of Indian students who have been granted a study permit has increased by 30.3% to 1.39 lakh, compared to the previous year figure of 1.07 lakh. With only 82,990 permits granted to Indian students in 2017, it reflects an increase of 68.3% in two years.

Canada attracts more and more foreign students. This can be attributed to several factors, such as uncertainties related to optional training programs (OPT) for international students in the US. UU., Some of these problems were resolved through judicial intervention. After completion of the US studies. In the US, there are also challenges in obtaining an H-1B visa (the most commonly used work visa) for those at the entry level.

Karan Gupta, a professional study advisor abroad, said: “If a student studies in Canada, they are more likely to get a well-paid job and settle in the country. This is the main reason why the numbers increase. “He added that the country is perceived to be safe and welcoming to foreigners.” The country also has some world-renowned universities such as the University of Toronto, the University of Waterloo and McGill University. and students are eager to attend these universities, “Gupta said. Now that the United Kingdom offers a two-year work permit to students next year, some students who were considering Canada can now consider the United Kingdom,” he added. .

Canada allows students to work part-time and finance their studies and a post-graduation work permit (PGWP) is available for up to three years (depending on the course of study). Canadian education and work experience also help to obtain higher points on the Express Entry route, if the previous student wishes to obtain permanent residence. To top it all, employment opportunities in the technological space are increasing in Canada.

“Education is a byproduct of the desire to make a living. Students see Canada as an easier option for migration, “said KP Singh, CEO of the Institute of Administration and Foreign Studies. Most serious students are led by courses in futuristic science, biology, engineering and computer science. While For many courses and universities, it doesn’t matter, serious people opt for study options in Toronto and Vancouver, “Singh said. He added that Canada, like Australia, is now promoting its underdeveloped regions to attract more foreigners.

An immigration lawyer admits that the labor market is not as dynamic in the non-technological segment. He also points out that dubious immigration agents attract immigrants to Canada with a study visa, while these students actually work alone and do not study. The authorities are aware of this problem and are stricter on the subject of student visas.

In general, international students must obtain study permits in almost all cases, with some exceptions, such as a very short course. It is not a visa, but a document that authorizes international students to study at designated educational institutions. Generally, it is valid for the entire duration of the course of study plus an additional 90 days to allow the student to leave Canada or request an extension. The Canadian immigration agency, the Ministry of Immigration, Refugees and Citizenship of Canada (IRCC), recently published study permit datasets based on the year they entered into force.