Home | India | Top Headlines | The results of the exit poll predict another great victory for Arvind Kejriwal; BJP projects to be distant second

The results of the exit poll predict another great victory for Arvind Kejriwal; BJP projects to be distant second

NEW DELHI: Arvind Kejriwal is ready to be the prime minister of Delhi for a new term, with exit polls predicting a victory for his Aam Aadmi Party in the fiercely contested elections of the 2020 assembly in Delhi.

A survey of 10 exit surveys predicts 52 seats for the AAP and 17 for the BJP. It is likely that Congress gets only 1 seat.

If the predictions of the exit poll come true on February 11, when the votes are counted, it will be a great victory for the AAP, which faced a very energetic and aggressive BJP challenge. 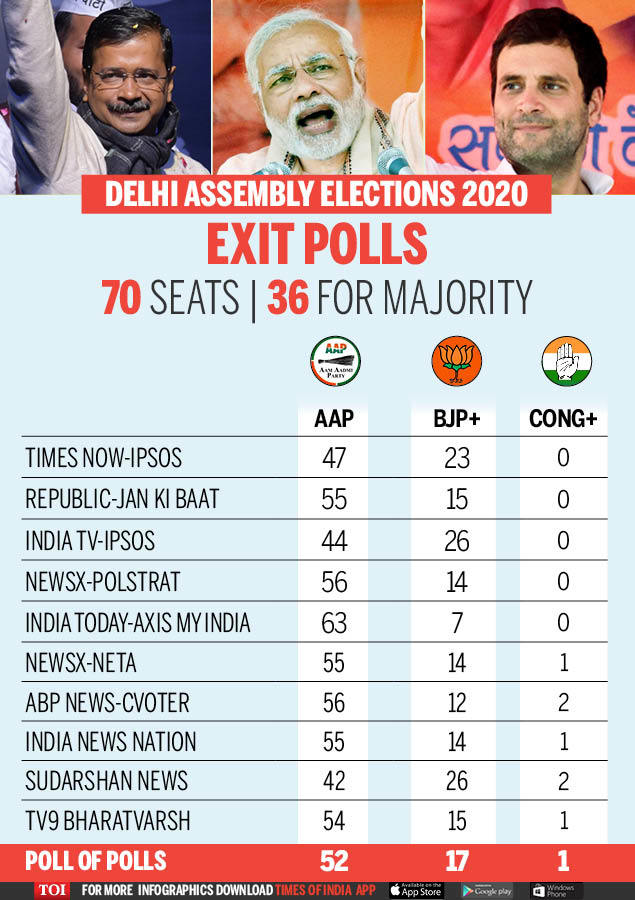 The Sudarshan News exit poll has predicted 24-28 seats for the BJP, which is the highest projection for any agency’s party. The AAP is likely to win 41 to 45 seats, predicts Sudarshan News.

India News Nation has predicted 55 seats for the AAP and 14 for the BJP.

NewsX – Polstrat has predicted 56 seats for the AAP and 14 for the BJP.

India TV has predicted 44 seats for the AAP of Arvind Kejriwal and 26 for the BJP.

In the 2015 assembly elections, the Kejriwal AAP obtained a record mandate by winning 67 of 70 seats. The BJP had won 3 seats, while Congress had not been able to open its account.


The AAP courted the electorate with its development agenda and its promises to provide an honest government that would take care of the poor.

The BJP, which did not win in Delhi after 1993, showed its determination to form a government this time with a high decibel campaign that highlighted what it sees as a threat to national security.

BJP invoked important decisions taken by its government – amending the citizenship law, repealing articles 370 and 35A, and surgical strikes in Pakistan – to seek votes, in addition to highlighting what it claims to be the AAP failure to guarantee supply of clean water, installation of CCTV cameras and give free wifi in Delhi.

The saffron party campaign in Delhi, which involved about 200 parliamentarians, 11 main ministers and more than 50 central ministers, was personally administered by the Union Interior Minister Amit Shah.

Meanwhile, Congress struggled to remain relevant in the politics of Delhi. Eliminated in the 2015 elections when it obtained less than 10% of votes and did not win a single seat, the great old party has been desperately trying to recover its traditional bank of votes from slums, resettlement colonies, Dalits and minorities.

Although his campaign lacked the incisivity of the two rival parties, the last week of the election campaign witnessed senior congressional officials: Rahul Gandhi, Priyanka Gandhi Vadra, Manmohan Singh and chief ministers of four states, among others, calling For the game to come back. he ruled Delhi for 15 years and built “world class” infrastructure. The party openly extended its support to anti-CAA protesters in Shaheen Bagh and Jamia Millia Islam with an eye on Muslim voters.

In addition to free electricity and water for the poor, pucca houses for slum dwellers, more services and property rights for residents of unauthorized colonies, drinking water in each home, security for women, jobs or allowances for the unemployed, Yamuna cleaner, more buses and new schools and colleges are among the main promises made by the three parties.

The three parties highlighted the Poorvanchalis, which represent almost a quarter of the total votes, to receive special attention. All of them have given tickets to several candidates in the region. They have also been talking about the regularization of 1731 unauthorized colonies and granting property rights to their residents to influence the 25 Lakh voters who live there.

Elections in the Delhi assembly: what it will take for each party to win | Delhi Election 2020 Election News