Prime Minister Narendra Modi on Thursday unleashed an attack on the entire opposition on the issue of the Citizens Amendment Act, accusing him of spreading fear and misinforming people about the legislation that allows non-Muslim immigrants from the three neighbors of India: Pakistan, Bangladesh and Afghanistan. Become citizens of India.

In response to the debate in Parliament on a motion that thanks the President for his speech at the joint session of both houses, Prime Minister Modi cited statements made by Nehru, Ram Manohar Lohia and Lal Bahadur Shastri on supporting minorities facing persecution in Pakistan.

The prime minister also mentioned the resolution of the Congress Working Committee of November 25, 1947, to say that they wanted the persecuted minorities in Pakistan to receive citizenship.

Here are the main quotes made by PM Modi in his speech:

Was it Nehru communal?

“Pandit Nehru himself was in favor of protecting minorities in Pakistan, I want to ask Congress, was Pandit Nehru communal? Did he want a Hindu Rashtra? Nehru was a great thinker. Why didn’t he include all citizens but only Did you mention religious minorities in The Nehru-Liaquat Agreement? The Prime Minister of India (Jawaharlal Nehru) wrote to the Prime Minister of Assam (Gopinath Bordoloi), saying it was necessary to differentiate between Hindu refugees and Muslim immigrants. Nehru was of the opinion that even laws can be changed in this regard. Nehru had wanted to defend minorities in western Pakistan and eastern Pakistan (now Bangladesh). ”

‘Now you will call Shastri communal’

Citing the words of Lal Bahadur Shastri about a resolution in Parliament on April 3, 1964, Prime Minister Modi said:

“The Chamber is of the opinion that, in view of the insecurity of life, property and honor of minority communities living in the eastern wing of Pakistan and the general denial of all human rights in part of Pakistan, the Government of the India should In addition to the relaxing restrictions on the migration of persons belonging to minority communities in eastern Pakistan to the Indian Union, the steps to enlist world opinion are also considered. ”

Then he went to dig the opposition and said “you can think that these words are from a leader of Jan Sangh from that time. But let me inform this distinguished House that they are from Lal Bahadur Shastri. Now he will also call communal Shastri, you would also call him a divisor of Hindus and Muslims. ” 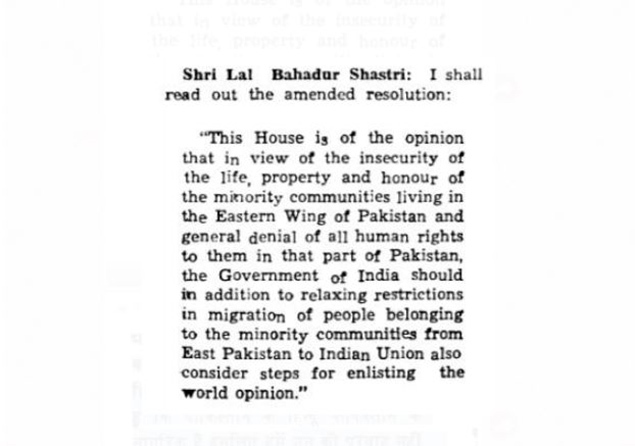 ‘I urge Samajwadis not to ignore Lohia’


“I reject the fact that we should not worry about the Hindus of Pakistan, since they are Pakistani citizens. Regardless of the citizenship of the Hindus of Pakistan, it is our duty to protect them as we protect Indian Muslims and Hindus. It is not said by a BJP or a leader of Jan Sangh, but Ram Manohar Lohia said this. I urge Samajwadis not to ignore Lohia. ” 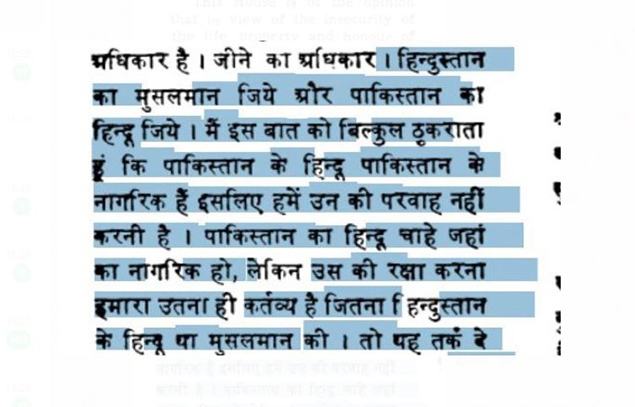 “On November 25, 1947, the Congress Working Committee passed a resolution. It says: Congress is obliged to provide full protection to all those non-Muslims from Pakistan who have crossed the border and come to India or can do so to save his life and honor. I don’t think Congress was communal in 1947 and suddenly became secular. You could have written to all the communities that come from Pakistan. Why did you use the term “Non-Muslims?” Congress also will you label Shastri as “communal”? “”

‘A Muslim is just a Muslim for Congress’

“We are reminded that the slogan of ‘Quit India’, ‘Jai Hind’ was given by Muslims. The problem is that, in the eyes of Congress, these people are only Muslim even after so many years. For us, they are Indians.” . Whether Khan Abdul Ghaffar Khan, Abdul Hamid or Abdul Kalam Azad, all these are Indian to us. ”

“They (the opposition) have used all their power to instill an imaginary fear in people’s minds against CAA. Pakistan also speaks the same language. Pakistan played all the games to deceive Indian Muslims. But that country’s attempts they have failed … A Muslim is only a Muslim for Congress, but we see them as Indians. ”

‘Is it okay to misinform the nation?’

“Is it okay to divert and misinform the nation? Can anyone be part of a campaign that does the same? The path that many opposition parties are taking in CAA is unfortunate.”

“All colleagues should ask themselves questions about what is said about the CAA. We must stop the tendency to misinform and disorient the country … The opposition members are very excited these days, those who shut up became violent.” , said. .