NEW DELHI: Redress of grievances through procedure established by law is the hallmark of any civilised society, said a Delhi court on Friday and “postponed till further orders” hanging of the four convicts in the 2012 Nirbhaya case.

Additional sessions judge Dharmendra Rana stated, “The courts of this country cannot afford to adversely discriminate against any convict, including death row convicts, in pursuit of his legal remedies by turning a Nelson’s eye towards him.” 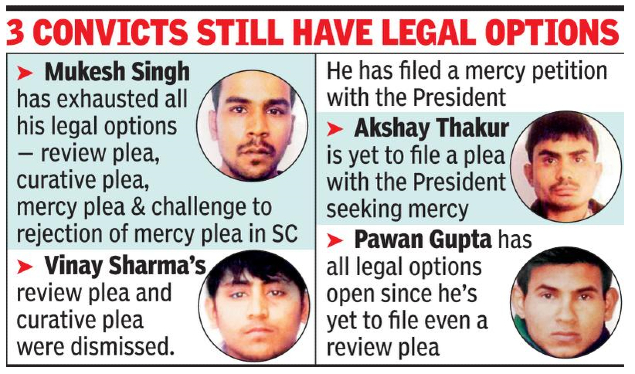 Special prosecutor Irfan Ahmed said that Mukesh had exhausted all his constitutional and legal remedies and the mercy plea of another convict Vinay Kumar Sharma was pending. In case of the other two, Pawan and Akshay, there weren’t any pleas pending. The state prosecutor, therefore, said that barring Vinay, the other three men could be hanged on February 1.

Ahmed submitted that any relief to the three convicts apart from Sharma was tantamount to abuse of the process of law and lead to travesty of justice.

The court, however, dealt with the prosecution’s contention stating that Rule 836 of the Delhi Prison Rules provided that if an appeal or an application is made by only one convict, the execution of sentence shall be postponed in the case of co-convicts. Appearing for the three convicts — Sharma, Gupta and Thakur — advocate A P Singh argued that while Sharma’s mercy plea had been filed, convict Thakur intended to file a mercy plea before the President of India.

Amicus curiae Vrinda Grover and advocate Soutik Banerjee, who appeared for convict Mukesh, submitted that the convict had been “earnestly” and “sincerely” pursuing his legal remedies without any unnecessary delay.

Grover stressed that since all convicts were held guilty for the same offence and were convicted by a common judgment their fate could not be segregated and convict Mukesh’s case couldn’t be dealt with separately.

Grover relied on a precedent of the Supreme Court in the matter of Harbans Singh versus the state of UP to contend that the execution of the death sentence would lead to an “irreversible and irreparable” process. She also argued that in case the mercy plea of similarly placed convicts is favourably considered by the President of India, the change in circumstance would entitle Kumar to file a fresh mercy plea.

Present in court were Nirbhaya’s parents, who paid close attention to the proceedings. Advocates Seema Kushwaha and Jitender Kumar Jha, who represented them, argued that the convicts were trying to thwart justice by adopting delaying tactics. Jha also stated that according to a provision of the Delhi Prison Rules, 2018, the jurisdiction to decide such applications, filed by convicts, lay with the government and not with the court.

Unimpressed with the contention, the court observed, “I cannot agree with the contention of the counsel for the victim that the jurisdiction to dispose of the application at hand vests with the government and not this court.” Neither did the provision, it went on to add, confer any power upon the executive authority to cause the order of the death sentence to be carried into effect nor did it give any judicial power to the authority to deal with such applications.