NEW DELHI/BEIJING: Around 366 Indians evacuated from Wuhan, the Chinese city at the heart of the deadly coronavirus outbreak, and expected to land in New Delhi on Saturday morning, will be placed in complete lockdown for 14 days at two quarantine facilities set up by the Army at Manesar and by ITBP at Chhawla in Delhi.

Not even military personnel and doctors and other staff will be allowed to leave the facility unless “compelled by extreme urgency”, an Army officer said.Air India on Friday afternoon sent a double-decker Jumbo 747 to Wuhan from Delhi. After a delay, boarding finally began at Wuhan around 10.30pm (IST). Air

India said another special plane might be sent on Saturday. 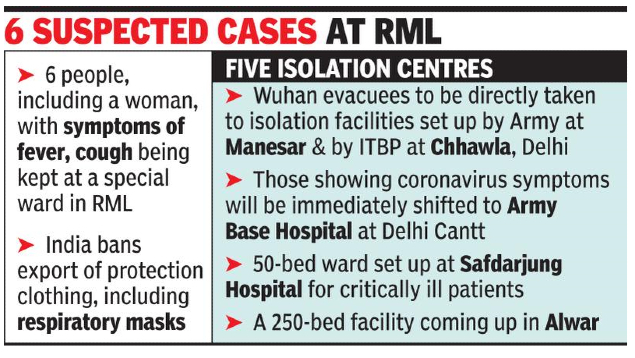 Meanwhile, six suspected novel coronavirus cases have surfaced in capital and are being kept under observation in Ram Manohar Lohia (RML) hospital. Apart from Army and ITBP isolation facilities where the returnees from Wuhan in China will be kept under observation for at least 14 days, a 50-bed isolation unit has been set up at Safdarjung Hospital for critically ill patients.

Once the Boeing 747 carrying students from Wuhan returns to Delhi, the passengers will undergo initial screening at the airport by a joint team of Armed Forces Medical Services (AFMS) and Airport Health Authority (APHO), and then taken directly to the quarantine centres. About 280 male students are to be taken to the Manesar camp and about 90 passengers, comprising families and women, will go to the Chhawla camp, the health ministry said.

The plane, with 15 crew and five cockpit members, has 423 passenger seats. It’s carrying five doctors from RML Hospital and one paramedical staffer of Air India, along with medicines, masks, overcoats, packed food and other equipment. “A team of engineers and security personnel are also in the special aircraft. The rescue mission is led by Captain Amitabh Singh, director (operations) at Air India,” said Dhananjay Kumar, the airline’s spokesperson.

At Wuhan, nearly 400 Indians had reached the airport ahead of their evacuation. They had received their boarding passes and were expecting to fly early morning on Saturday.

The returnees went through a check-up at Wuhan. Reports reaching Beijing indicated that none of the travellers was stopped at the time of giving boarding passes. Most of them are students studying medicine and other subjects in five universities in Wuhan. They were among students who had chosen to stay back during the Spring festival holidays.

At Delhi airport, the Army said the evacuees will be classified into three groups. The first group of “suspect cases” showing signs of fever, cough or respiratory distress, will be directly transferred to an isolation ward at the Army Base Hospital in Delhi Cantonment (BHDC).

The second category will be of “close contact cases”, which will include individuals who have visited a seafood/animal market or a health facility or have encountered a Chinese person with symptoms in the last 14 days. They will be escorted in earmarked vehicles directly to the quarantine facility. The third group of “non-contact cases” will also be clubbed along with the “close contact” category and sent to the quarantine facility.

The facility near Manesar consists of accommodation barracks for the students, administrative and medical facilities areas. “To prevent any mass outbreak, the facility has been divided into sectors, each with a maximum capacity of 50 students. Each sector has been further subdivided into barracks. The students in different sectors will not be allowed to intermingle,” said the officer.

All returnees and visitors, in turn, will wear three-layered masks. After 14 days, persons with no symptoms will be allowed to go home with their detailed documentation being sent to their district/state surveillance units for further observation.

“Those suspected of having been infected with coronavirus will be discharged after clinical recovery and two successive negative samples tested for n-COV. No civilian or serving personnel detailed to work at the facility will be allowed to go outside unless compelled by extreme emergency,” an Army officer said.

Meanwhile, the six individuals admitted to RML Hospital with suspected coronavirus symptoms have all recently returned from China, including a 24-year-old woman who had been staying in China since 2015 and returned on January 29.

The rest are all men, including a 19-year-old youth who was in China from November 2019 to January 24, and 34-year-old who returned on January 16 after a 10-year stay in that country.

While five of the six self-reported to the hospital on Thursday, a 32-year-old man who had visited China from January 4 to January 11 was admitted on Friday. “The samples of all the six patients have been sent for testing and the reports are awaited,” an RML official said.