NEW DELHI: A peaceful protest by students of Jamia Millia University against the Citizenship (Amendment) Act on Thursday afternoon was disrupted by a shocking act of firing by a gunman in front of a police contingent and cameras telecasting the event live. As a student tried to reason with him, the gunman fired, injuring the student’s left hand, before he was taken into custody by the cops.

The shooter, according to police, is a juvenile and his age is being verified. He was using a countrymade weapon which has a short range. Police have come under fire from many eyewitnesses and observers for not making any effort to rein in the youth when he was walking backwards towards them, waving the gun and shouting slogans. The cops were seen watching nonchalantly and one of them intervened quite late, after the man had fired. He handed over the gun to them and was taken away. A case of attempt to murder has been filed against him.

The incident came after days of intense campaigning for the Delhi assembly elections when rhetoric on Shaheen Bagh has taken centrestage. 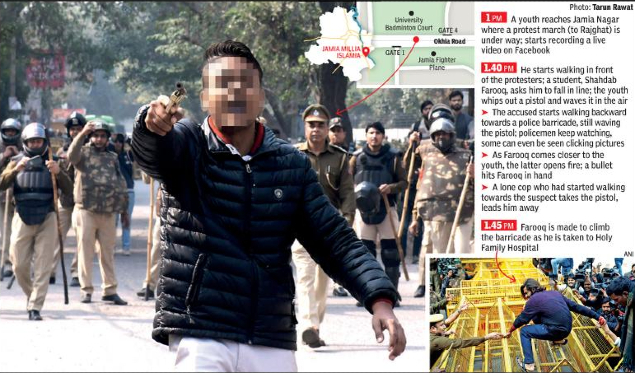 It was around 1.40pm when the 17-year-old shooter, wearing white trousers and a black jacket, entered the protest site by climbing over the roadside grilles near Gate No. 4 of the university on Okhla Marg. The students — about 400 — were planning to march to Rajghat where they would have formed a human chain.

‘Come and take your freedom’, screams shooter as cops watch

Instead of joining the protesters, the youth started walking ahead of them, hurling abuses. One of the protesters, Shadab Farooq, along with some volunteers, approached the man and asked him to fall back in line so that they could begin the protest. However, the man hurled abuses at Farooq, whipped out a countrymade pistol and started threatening to shoot the protesters.

In videos that went viral on social media, the youth is seen waving the pistol in the air and walking ahead of the protest while media persons and volunteers try to persuade him to drop the weapon. “He kept shouting at the protesters. ‘Aake le lo Azadi,’ he screamed. Before opening fire, he shouted, ‘Hindustan mein rehna hoga to Vande Mataram kehna hoga’,” said TOI photographer Tarun Rawat, who was at the scene when the incident unfolded.

“We had thought he was among the protesters at first, but when he started waving the gun, we were taken aback and tried to convince him to drop the weapon. He walked with his back towards the police for a few metres and then suddenly opened fire at Farooq,” said one of Farooq’s batchmates. “The police were at a distance and had slowly started moving despite being alerted about the man carrying a gun,” she said.

Witnesses say that after hearing the gunshot, they saw Farooq and his woman friend crouching on the road with blood oozing out of Farooq’s left hand. By this time, the policeman who had started walking towards the shooter took away the pistol and led him away.

DCP (Southeast) Chinmoy Biswal said that since no permission was given to the protesters to hold a march, a barricade had been put up near Holy Family Hospital to stop them. The entire force was deployed behind the barricades, except for a few officers. “The incident happened within the few seconds during which the officers got alerted and the suspect opened fire. We immediately apprehended him,” he said.

During the initial interrogation, the youth claimed that he had travelled to Delhi from a village near Jewar in UP with the intent of teaching the protesters a lesson. He claimed he was not affiliated with any organisation.

The police have registered a case of attempt to murder under Section 307 IPC and under Arms Act. They are in the process of verifying the age of the accused since he has produced his Aadhaar card and certificates that mention his age to be 17 years and nine months. However, the date of birth mentioned in his Class X CBSE marksheet, which TOI has accessed, is April 8, 2002, which makes him older. It was found that he had procured the weapon from an arms dealer in UP. Police have informed his family and will produce him before the juvenile justice board.

Meanwhile, Election Commission has sought a report regarding the law and order situation from the police commissioner after the incident. Two senior police officers met the injured student at the trauma centre on Thursday evening.