NEW DELHI: The foreign ministry is undertaking its biggest restructuring exercise in almost half a century, making it the Centre’s first ministry to undertake ‘root-branch’ structural reform.

The ministry’s management and functioning structure remains hidebound and out of sync with modern practices and demands of India’s foreign policy, which is becoming more complex and diverse.

With foreign secretary Harsh Shringla taking charge this week, foreign minister S Jaishankar is putting his plans of redrawing the MEA structure to work. It helps that Shringla and Jaishankar are on the same page regarding the overhaul, and getting it out early in the government’s tenure means they will have ample time to put the plans into action. 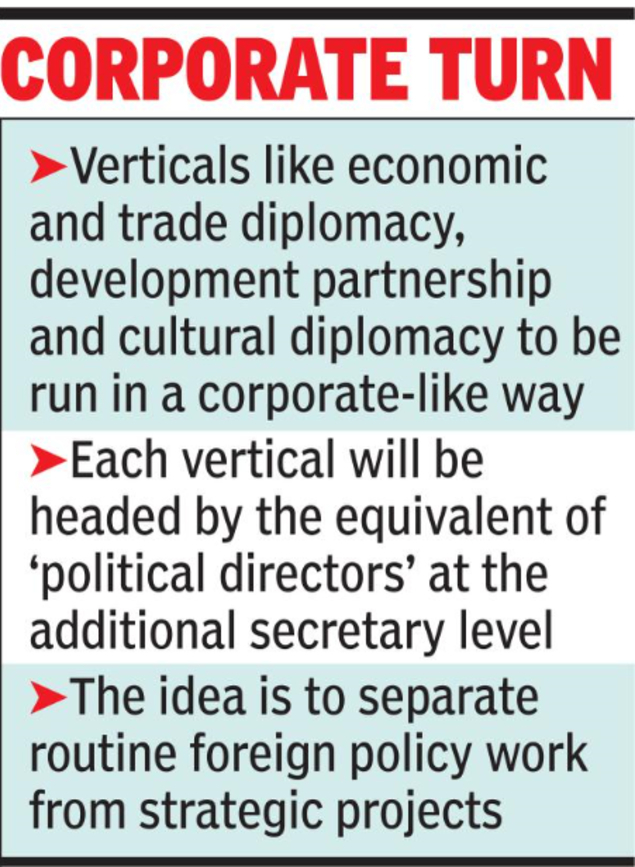 The new structure will be more corporate in nature. MEA will build a series of ‘verticals’ like economic and trade diplomacy, development partnership, consular, emerging areas like technology etc. Each of these verticals will be headed by the equivalent of “political directors” at the additional secretary level. The idea is to decentralise the present pyramid-like structure, to separate routine foreign policy work from strategic projects. This will leave the secretaries to handle the big-ticket issues.

On Thursday, MEA created the first verticals. Akhilesh Mishra, the current head of ICCR (Indian Council for Cultural Relations) will oversee all the four development partnership divisions. These are key to India’s overseas aid and development projects, particularly in the neighbourhood and Africa. Dinesh Patnaik will take over ICCR and handle the entire cultural diplomacy portfolio. P Harish will oversee the economic diplomacy initiative, leading the multilateral economic diplomacy and states division. Nagma Mallik will have three Africa divisions reporting to her. She will relinquish her current job as joint secretary, policy planning to Anupam Ray, who has just returned from Houston. Vikram Doraiswami will take charge of all multilateral work, overseeing political, economic and conferences and summits. He will give up his charge as head of Indo-Pacific to Neena Malhotra, who will oversee Indian Ocean, Indo-Pacific, and south-east Asia, with Smita Pant taking over as joint secretary (Bangladesh and Myanmar).

Consular issues, an increasingly important area, emerging strategic technologies, cyber will be the future areas of expertise to be woven into the MEA structure. MEA recently set up the NEST (new and emerging strategic technologies) division. India wants to be part of the global rule-making order in these areas, so stands to reason that MEA should build policy expertise here.

Currently, the system puts enormous pressure on joint secretaries as well as the four secretaries, making running the ministry and India’s foreign policy a continuous fire-fighting exercise, leaving little or no space for strategic planning, initiatives, etc. The new system is designed to break some of the silos that MEA currently functions under, align the Indian system with global powers, which will answer a perennial problem MEA faces when organising official dialogues with their international counterparts – of a mismatch in designations.

With a reputation of having one of the smallest foreign services in the world, MEA will need to get creative about staffing. At present they take in officials from other services, but soon that pool will be expanded from the private sector, think tanks, etc. In addition, MEA plans to deploy its people in other key ministries like commerce, defence, finance, science & technology, etc. There are two reasons for this – international cooperation is increasingly being used for domestic development goals and India’s internal decisions have a foreign policy impact. This cross-pollination is intended to synergise the two goals.

The exercise has just started, and it will take a few months, perhaps even a year to straighten out the knots at the operational level. But MEA may become a trailblazer in the Indian government.