THIRUVANANTHAPURAM: The first case of the new strain of a coronavirus (nCoV) in the country was reported from Thrissur, Kerala, on Thursday. A young woman studying medicine at a university in the Chinese city of Wuhan, the epicentre of the nCoV outbreak, has tested positive for the virus that has killed 170 people in China and has spread to other countries, including the US.

State health minister K K Shailaja said the student was hospitalised after she developed symptoms of fever and a sore throat. She was quarantined, along with four others, in the isolation ward of the general hospital in Thrissur. “The student who has tested positive for the virus is stable; there is nothing to worry,” she said. The five students, who had returned from Wuhan, had come to the hospital of their own volition. Three of them were shifted to Thrissur Medical College Hospital by Thursday afternoon. Swabs and blood taken from them have been sent for tests. 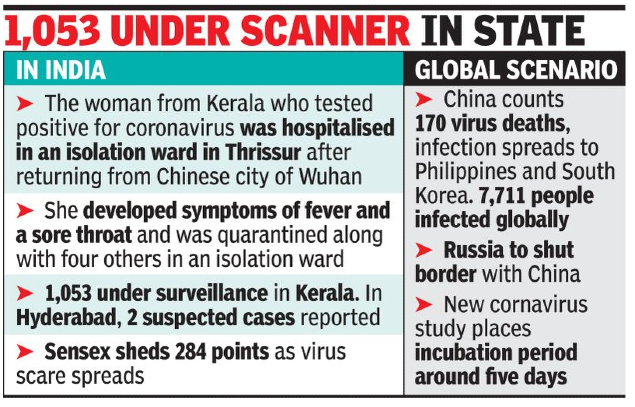 Meanwhile, at a high-level review meeting in Delhi, cabinet secretary Rajiv Gauba decided that all those who have come from China after January 15, 2020 will be tested as the virus has an incubation period. Apart from China, 15 other countries have reported a total of 68 confirmed cases so far.

In Kerala, the medical college principal, Dr M A Andrews, said the three had been shifted to the hospital’s specially prepared isolation ward. Two more patients, including the student who tested positive, remain in the isolation ward. A final decision on shifting them will be taken later. The health minister, principal secretary (health) Rajan N Khobragade and other officials are expected to reach Thrissur late Thursday night. Khobragade was informed about the case in Thrissur in a video conference with the Union cabinet secretary, the health secretary and health secretaries of all states on Thursday. “The Union health ministry confirmed that one out of the six blood samples sent for tests to NIV Pune has tested positive. However, a gene identification test result is pending. This will reaffirm the status of the case,” Khobragade said.

Meanwhile, 1,053 people who have returned from virus-hit regions are under observation in the state. Of these, 15 have been admitted to isolation wards of various hospitals in the state. Of the total 24 samples sent for tests to date, only one among them has tested positive.

US reports 1st case of person-to-person spread of coronavirus