Home | India | Top Headlines | Anticipatory bail can be given till completion of trial: SC | India News

Anticipatory bail can be given till completion of trial: SC | India News

NEW DELHI: Referring to the freedom movement during which people were jailed for protesting against the British rule, the Supreme Court on Tuesday lamented that arbitrary arrests continued to be a pervasive phenomenon and said discretionary power of courts to grant anticipatory bail cannot be curtailed and the protection could continue till end of trial.

Adjudicating on the issue of extent of protection granted to an accused under anticipatory bail provision, a five-judge Constitution bench of Justices Arun Mishra, Indira Banerjee, Vineet Saran, M R Shah and S Ravindra Bhat held in a unanimous verdict that protection from arrest should not ordinarily be limited to a fixed period, but could continue till end of trial. 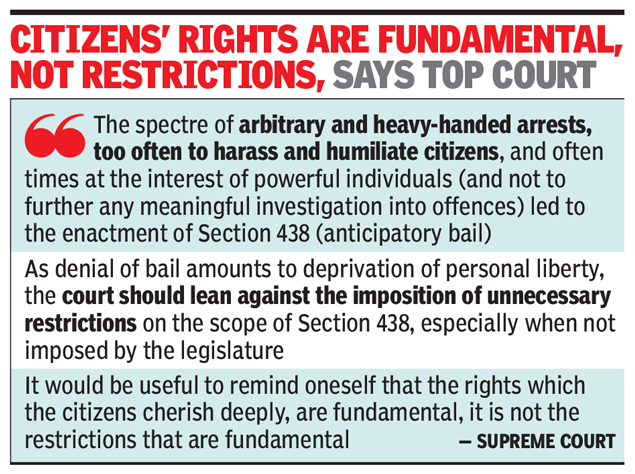 “The spectre of arbitrary and heavy-handed arrests, too often to harass and humiliate citizens, and often times at the interest of powerful individuals (and not to further any meaningful investigation into offences) led to the enactment of Section 438. Despite several Law commission reports and recommendations of several committees and commissions, arbitrary and groundless arrests continue as a pervasive phenomenon. Parliament has not thought it appropriate to curtail the power or discretion of the courts, in granting pre-arrest or anticipatory bail, especially regarding the duration,” Justice Bhat said.

“Therefore, it would not be in the larger interest of society if the court, by judicial interpretation, limits the exercise of that power… the danger of such an exercise would be that in fractions, little by little, the discretion, advisedly kept wide, would shrink to a very narrow and unrecognisably tiny portion, thus frustrating the objective behind the provision, which has stood the test of time, these 46 years,” he said referring to the Jallianwala Bagh massacre and several other incidents in which protesting people were brutally suppressed and jailed for long.

The provision of anticipatory bail under Section 438 was introduced when CrPC was amended in 1973.

The bench said life of anticipatory bail does not end generally at the time and stage when the accused is summoned by court, or after framing of charges, but can also continue till the end of trial. “However, if there are any special or peculiar features necessitating the court to limit the tenure of anticipatory bail, it is open for it to do so,” the bench said.

It held that anticipatory bail application could be moved by a person even before filing of FIR and held that the court, while granting anticipatory bail, should examine seriousness and gravity of the offence to impose any condition on the petitioner, if necessary.

“The reason for enactment of Section 438 in the Code was parliamentary acceptance of the crucial underpinning of personal liberty in a free and democratic country. Parliament wished to foster respect for personal liberty and accord primacy to a fundamental tenet of criminal jurisprudence, that everyone is presumed to be innocent till he or she is found guilty. Life and liberty are the cherished attributes of every individual. The urge for freedom is natural to each human being. Section 438 is a procedural provision concerned with personal liberty of each individual, who is entitled to the benefit of the presumption of innocence. As denial of bail amounts to deprivation of personal liberty, the court should lean against the imposition of unnecessary restrictions on the scope of Section 438, especially when not imposed by the legislature,” the court said.

Justice Bhat said, “In conclusion, it would be useful to remind oneself that the rights which the citizens cherish deeply, are fundamental- it is not the restrictions that are fundamental”.