NEW DELHI: US President Donald Trump is scheduled to visit India between February 24-26. While the dates are yet to be formally announced, the visit, which will be his first to India, will see the two sides arriving at a trade deal that has been months in negotiation.

Trump’s visit, coming on the heels of an impeachment process and virtually days before the gruelling election campaign season begins in the US, will be used by both countries to advance their strategic and economic ties which have made strides in recent years. However, though bilateral trade has reported healthy figures, Indian sources reckon a trade agreement will go a long way in dealing with the disagreements that pop up from time to time. 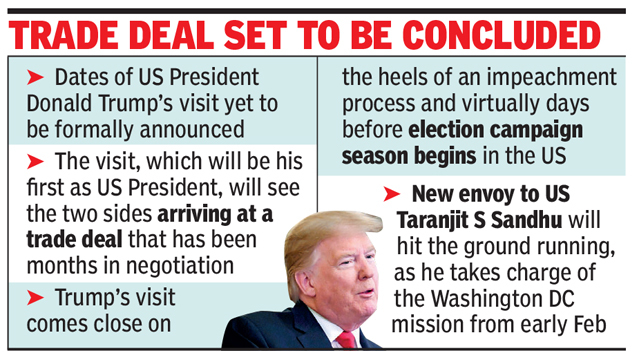 Meanwhile, new envoy to the US Taranjit Singh Sandhu will hit the ground running, as he takes charge of the Indian mission in Washington DC from early February. Harsh Shringla, who recently demitted office as ambassador to the US, will take over as India’s foreign secretary from January 29.

Modi, who had hosted Trump’s predecessor Barack Obama in 2015 as the chief guest on Republic Day, has been one of the few world leaders who has had a reasonably good working relationship with the US president.