NEW DELHI: Exactly three years from now, you will be able to drive down from Delhi to Mumbai in 12 hours, road transport minister Nitin Gadkari said. “January 26, 2023 has been set as the deadline for the Delhi-Mumbai expressway and there will be no compromise on this,” Gadkari told TOI.

Sources said the minister has asked National Highways Authority of India (NHAI) to take up the project on top priority considering the largescale impact it will have on logistics movement between Delhi and Mumbai. “For me, it’s as prestigious project as the Mumbai-Pune expressway was,” Gadkari said. 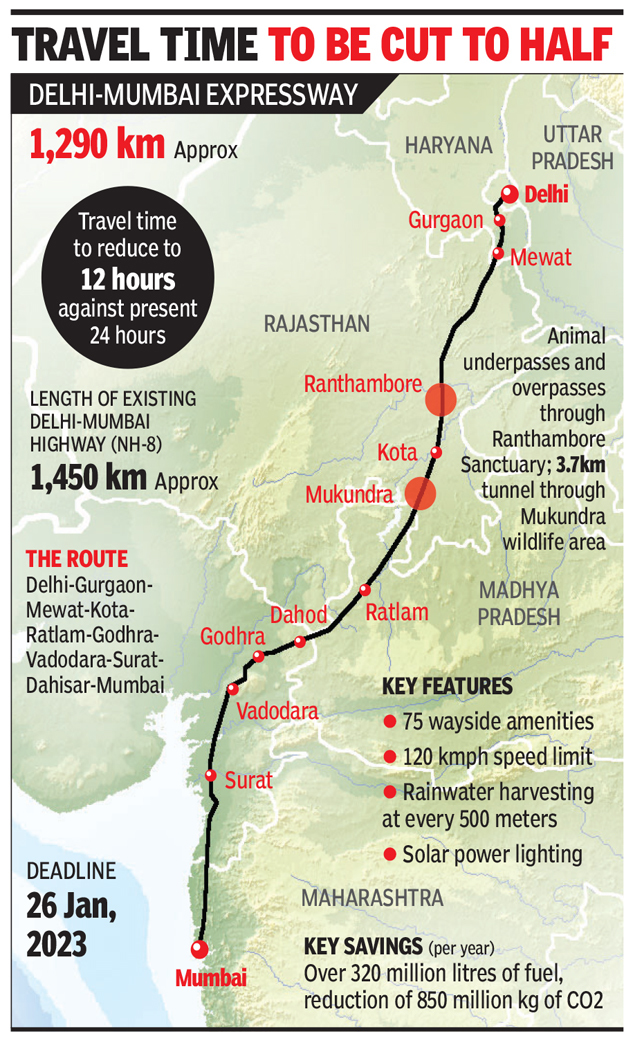 NHAI officials said works have been awarded for nearly 40% of the expressway and bidding is underway for another 50%. “Nearly 85-90% of land has been acquired and work has started on some stretches. We want to complete the project in record time to set an example,” a senior NHAI official said.

He added that while the expressway will have eight lanes, provision has been made for its expansion to 12 lanes to meet future traffic growth. According to the project details, those driving from Delhi to Jaipur on the expressway will save nearly 1.6 hours despite travelling a longer distance (285 km) compared to the existing Jaipur highway link, which is 277 km. Similarly, one would be able to save 3.3 hours to reach Udaipur and six hours to reach Bhopal.

“We will build 43 interchanges at intersections with major national and state highways to provide connectivity to major towns,” the official said.

NHAI officials also said 73 wayside amenities will come up along the expressway at every 50-km interval so that people can find one after every 40-50 minute drive. These facilities will have restaurants, food courts, dormitories, convenience stores, fuel stations and helipads as well.

They added that the alignment had been fixed in a manner to ensure no disturbance was caused to Ranthambore National Park. “There will be three animal underpasses with a combined length of 4.5 km and there will be five underground stretches with combined length of 2.5 km. The underground road stretches will ensure that there is no conflict between traffic and animals,” another official said.

Similarly, to ensure that there is no disturbance to Mukundra Hills wildlife, NHAI will build a 3.75 km-long tunnel. Moreover, a boundary wall of 8 metres with sound barriers of 3-4 metres will be fixed in the wildlife section.

“The project will also be a huge employment generator. We have estimated generation of 50 lakh mandays work during construction,” the NHAI official said.

Bigg Boss 13: Asim says, Paras and Mahira both have partners outside, but are faking a relationship on the show