MUMBAI: A day after it emerged that NCP chief Sharad Pawar had written to Maharashtra CM Uddhav Thackeray asking him to set up a Special Investigation Team (SIT) to probe the police action in the Elgar Parishad case in which nine activists were arrested by Pune police for their alleged links with the banned CPI (Maoist), the Union home ministry transferred the probe to the National Investigation Agency (NIA).

This move takes the matter entirely out of the three-party Maha Vikas Aghadi government’s hands and nullifies what BJP has perceived as attempts by the new three-party alliance government in the state to dilute the case filed when Devendra Fadnavis was leading the previous BJP-Sena regime.

The order signed by Union home ministry joint secretary Dharmender Kumar stated that the Centre was of the opinion that the case needed to be investigated by the NIA given the “gravity of offence” involved, the “role” of CPI (Maoist) and the imperative of unearthing the “larger pan-India conspiracy involved”. The arrested accused have been booked for sedition and waging war against the Indian government, among other sections.

Section 5 of the NIA Act empowers the ministry to take over investigation of a case without permission or recommendations of the state government. 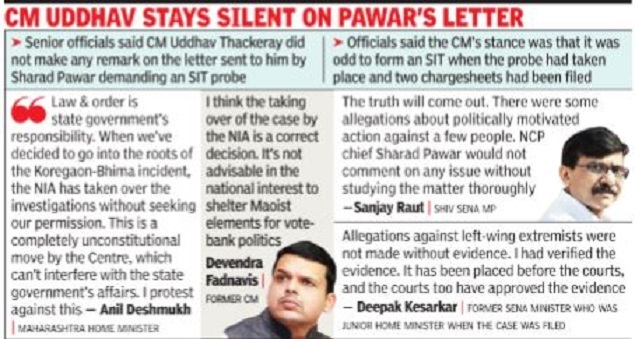 The Pune police’s case was that inflammatory speeches at the December 31, 2017 Elgar Parishad in Pune allegedly funded by CPI (Maoist) contributed to caste violence at Koregaon Bhima the next day. One of the arrested activists, Rona Wilson, has been accused by the cops of having written a letter where she allegedly mentions how senior comrades have “proposed concrete steps to end Modi raj” and a plot to carry out a “Rajiv Gandhi-type incident by targeting the PM’s road-shows”.

Though Sharad Pawar had alleged a frame-up and noted in his letter to Uddhav Thackeray that those arrested were “respectable citizens”, the Shiv Sena had reportedly not been enthusiastic about forming an SIT given its traditionally hawkish stance on national security issues.

After Pawar wrote to Thackeray, it was expected by some constituents of the Aghadi that the CM would accept the proposal and order the setting up of an SIT headed by an IPS officer. Thackeray, however, took the view that since the probe was already in progress and two chargesheets had already been filed in a special court, it would be improper to form an SIT at such a stage. If a senior official is to be believed, the CM made no remarks on Pawar’s letter.

Senior police officials too stood strongly by the investigation carried out by Pune police at a meeting to review the case convened by state home minister Anil Deshmukh and deputy CM Ajit Pawar on Thursday. According to reports, the senior cops told the ministers that admissible evidence had been gathered by Pune police. “Our people submitted admissible evidence to the team of cabinet members. At a juncture when chargesheets have been filed and framing of charges is in its final stages, it would be bad in law to entrust the case to the SIT, we told the ministers,” an official said.

Sources said the police officials also told the ministers that a case, once probed by an agency, could not be given to another state agency. The Bombay high court and Supreme Court had made this clear in their orders in other cases, they said. The cops also presented the entire list of forensic evidences to Deshmukh, sources added.

Among the officials present at the meeting were DGP Subodh Jaiswal, Pune police commissioner Venkatesham and then joint commissioner of police Ravindra Kadam.

The NCP chief had accused the Pune police of “conspiring with the BJP for framing social workers”. Pawar wrote to Thackeray after former judge of the Bombay high court B G Kolse Patil called on him to complain of “police high-handedness”.