NEW DELHI: Responding to public resentment at condemned prisoners in the Nirbhaya case exploiting Supreme Court-mandated guidelines to delay their hanging, the home ministry on Wednesday moved the apex court seeking a modification of execution guidelines which have been seen by many as privileging rights of death row convicts over the interests of victims and society’s cry for justice.

The ministry requested the SC to fix a time limit of seven days for a death row convict within which he must file a mercy petition after warrant for his execution is issued by the competent court. “Mandate all courts, state government and prison authorities to issue death warrant of a condemned convict within seven days of rejection of mercy petition and to execute him within seven days thereafter irrespective of the pendency of review/curative petitions by co-accused,” it said. 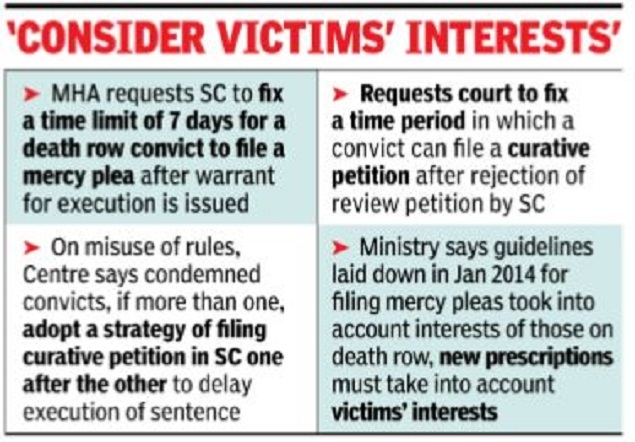 Pointing to how guidelines were misused, the Centre said condemned convicts, if there were more than one (as in the Nirbhaya case), adopted a strategy to file curative petition in the SC one after the other to delay execution of the death sentence awarded to them concurrently by the trial court, the high court and the SC. It requested the court to fix a time period in which the convict could file a curative petition after rejection of review petition by the SC

“While taking care of the rights of convicts, it is more important and need of the hour to lay down guidelines in the interest of the victims, their families and the larger public interest, lest the convicts found to be guilty of such horrible, dreadful, cruel, abominable, ghastly, gruesome and heinous offences would be permitted to play with the majesty of law and indefinitely delay or prolong the execution of the death sentence awarded to them,” the ministry said.

“The country is facing menace of terrorism, rape, murder and rape-cum-murder offences where death sentence can be awarded. There are many instances of heinous and horrific offences of rape accompanied by an equally horrible and horrific offence of murder of the victim which shakes the collective conscience of the nation. The accused gets a fair trial through the three-tier justice system. Even after the SC confirms the death sentence, the convict has recourse to review petition which is heard in open court,” it added.

“It often happens that one accused files review petition/mercy petition which gets rejected and other co-convicts choose not to file such petitions or initiate other proceedings. When the review/curative gets rejected of one accused, another files similar petition to attempt to delay the process of execution of condemned prisoners. This is for the reason that though many jail manuals do not prohibit execution of death sentence of co-convicts one by one, there may be some states where the execution of death sentence with regard to all the convicts in a case may be mandated to be done simultaneously,” the ministry said.