HYDERABAD: Claiming to have unearthed a major land scam in Amaravati, the Andhra Pradesh police has revealed that some of the poorest people in the state have been shown as owners of lands running into crores.

The state CID has now written to the Income Tax department and Enforcement Directorate asking for an investigation into possible tax evasion and money laundering in the deals. The letter, a copy of which is with TOI, states that the investigation found that many of the land buyers did not even have PAN cards and paid no income tax. 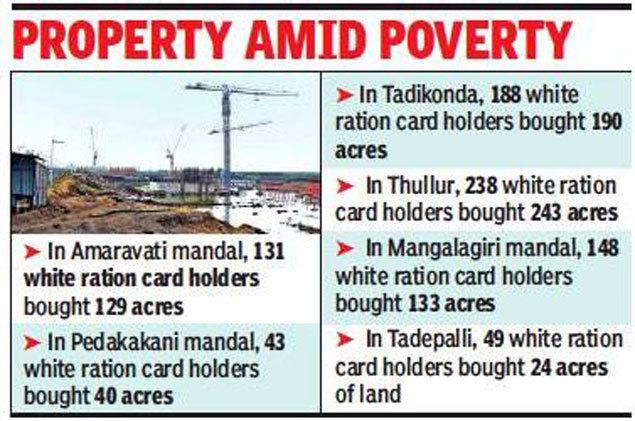 After Telangana was carved out of Andhra Pradesh in 2014, the then TDP government had announced that Amaravati would be the new capital of bifurcated AP and pooled 33,000 acres of land in the region next to Vijayawada. The YSRCP government that came to power in 2019, however, decided to have three separate capitals with Amaravati having only the assembly and all government offices would shift to Visakhapatnam.

After detecting that white ration card holders were being shown as landowners, CID registered a case of cheating and criminal conspiracy. In the letter to the to the Andhra Pradesh income tax chief commissioner sent on Wednesday, CID officials stated, “…the investigating officer examined the registrations of suspicious land done during 2014 and 2015 in Amaravati capital area of AP. It came to the light that huge cash transactions took place in purchasing the lands.”

The cops have given the I-T officials details of the purchasers, their address, size of land sold, sale deed and market value of the land. ED officials, on the other hand, have been asked to look into possible money laundering in the land deals.

Almost all the 797 white ration card holders, who bought 761 acres in the Amaravati capital region, are residents of Guntur, the investigation has shown. Of these, 529 don’t have PAN cards. The CID investigation found that the highest number of suspicious transactions took place in Thulluru Mandal where the core capital city of Amaravati was planned and the temporary secretariat and high court buildings have come up.

CID has already registered a case against former Minister of Telugudesam party Pattipati Pulla Rao and P Narayana regarding the purchase of assigned land.

Pakistan vs Bangladesh: 'Remember us in your prayers': Bangladesh's Mustafizur Rahman tweets before leaving for Pakistan | Cricket News