NEW DELHI: Armed with data, tax authorities have cracked the whip on jewellers who made huge cash deposits post demonetisation in 2016 but could not explain how they generated so much money when they were showing low income in their tax returns.

Sample this: A jeweller, who had disclosed income of under Rs 1.2 lakh, deposited Rs 4.1 crore cash in just three days. In another case, cash deposits during two days added up to nearly Rs 3.3 crore when the taxable income was under Rs 2.7 lakh. In yet another case, a jeweller with income of Rs 54 lakh deposited over Rs 2.5 crore cash. 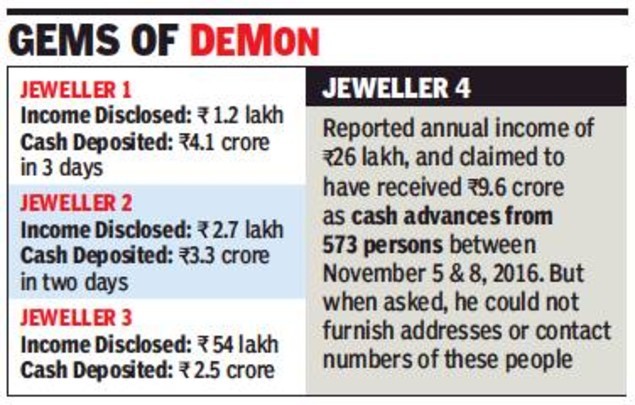 While most jewellers were unable to explain the source of cash, an analysis by the income tax department showed that many jewellers under scrutiny failed to report the deposits in their returns for assessment year 2017-18 (financial year 2016-17), officials told TOI. The tax department also looked at the utility bills of some of these jewellers and found that in one case, where the business shot up to a few crores, the electricity bill was less than Rs 1,500.

There were other aspects too which suggested it was not business as usual. A jeweller in Gujarat, for instance, had deposited Rs 4.1 crore cash from November 8, 2016, when demonetisation was announced, and December 30, 2016. But bank records accessed by the tax department showed that the businessman had only deposited Rs 44,260 during the corresponding period in 2015.

In many cases, jewellers sought to pass off the funds as unsecured loans. So, in one case, the deposits were of the order of Rs 52 crore while the tax return showed an income of Rs 3.2 crore. An official said the jeweller had only Rs 2.6 lakh as cash in hand on November 11, 2015, but it shot up to Rs 6.2 crore a year later. “There was no satisfactory explanation for the 238-fold increase,” an officer said.

While the records showed the cash as proceeds of purchases by unregistered dealers or individuals, during scrutiny many jewellers could not furnish complete bills. There were many jewellers who had shown cash advances of under Rs 20,000 from unknown customers, which were deposited into the bank account only to be returned later.

A jeweller, who had reported an annual income of Rs 26 lakh, claimed to have received Rs 9.6 crore as cash advances from 573 persons between November 5 and 8, 2016. But when asked, he could not furnish addresses or contact numbers of these people.

Many jewellers who had made large cash deposits told tax authorities that due to the Uri strike and Indo-Pak tension, people opted for gold and silver purchases as they are perceived as safer investment bets. “The fact is that Uri strikes were made in September 2016 and no such discernible pattern of advance receipts was noticed in the case of other jewellers,” the officer said.

Rangoli Chandel opens up about how sister Kangana Ranaut helped her after her acid attack, says she can “never pay back” | Hindi Movie News