NEW DELHI: The defence ministry has shortlisted only defence shipyard Mazagon Docks (MDL) and private ship-builder L&T in the race to bag the long-pending project to construct six new stealth submarines with foreign collaboration, effectively torpedoing Congress allegations that Adani Defence was being favoured in the over Rs 50,000 crore deal.

The defence acquisitions council (DAC) chaired by Rajnath Singh on Tuesday also approved the names of five foreign submarine-builders who can tie-up with either of the two Indian “strategic partners (SPs)”, MDL or L&T, to present their joint bids to execute the complex “Project-75 India”. 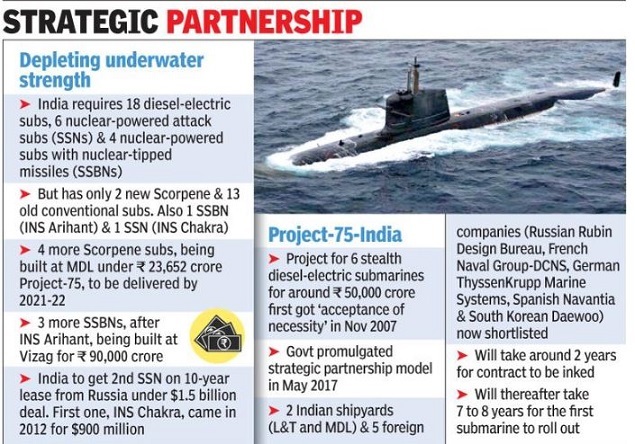 But the beleaguered Navy, grappling with a fast-depleting underwater combat arm, cannot pop the bubbly just yet. Though the initial “acceptance of necessity” (AoN) cost of P-75I was set at Rs 43,000 crore by the MoD, it will easily cross Rs 50,000 crore. It will take around two years from now for the actual contract to be inked with the selected SP-OEM combine, with another seven to eight years thereafter for the first submarine to be ready.

P-75I to build the six new submarines, with both land-attack cruise missiles and air-independent propulsion for greater underwater endurance, was first granted AoN way back in November 2007. But it suffered from general politico-bureaucratic apathy, with just files and succession of committees doing the rounds.

The project, along with the Rs 21,000 crore plan to build 111 naval utility choppers, will now be among the first projects to launched under the strategic partnership model promulgated by the NDA government in May 2017 to boost indigenous production. None of the major six to seven “Make in India” defence projects, collectively worth over Rs 3.5 lakh crore, have actually taken off in over the last six years, as was first reported by TOI.

The Congress just last week alleged the government was trying to favour Adani Defence, which had tied-up with Hindustan Shipyard (HSL) to submit a proposal for P-75I, by overruling the defence ministry high-powered committee tasked with selecting the eligible shipyards. This was yet another example of “crony capitalism”, it claimed.

But MoD officials on Tuesday stressed Adani Defence was “never in the reckoning” because its JV with HSL “existed just on paper” and did not provide the “requisite papers” despite being given additional time, while also “failing to meet even the basic criteria” for the project.

“Adani Defence, for instance, did not have the basic facilities, dockyard and seafront needed for the submarines to be launched. The empowered committee selected only MDL and L&T, which have proven ship-building experience, after examination of manufacturing facilities and financial records of all contenders. The DAC approved them on Tuesday,” said an official.

The MoD will now issue the RFP (request for proposal) to MDL and L&T within two months. The two entities, in turn, “will talk” to the five OEMs to work out their joint bids and respond to the RFP before the end of this year.

“The MoD, in consultations with the Navy, DRDO and others, has identified key technologies that need to come to India from the OEMs if a particular bid has to succeed in P-75I. This will ensure the next submarine-building project, P-76, is completely indigenous in design and technology,” said the official.

Why it is important to tackle coronavirus now | HT Editorial - editorials