A senior official explained “voluntary” or “optional” sharing of identification documents only meant respondents would not be required to provide details of Aadhaar, driving licence, voter ID or passport number if these have not been issued to them in the first place. But if one has the documents, the information is to be provided even though no document needs to be shown as proof. 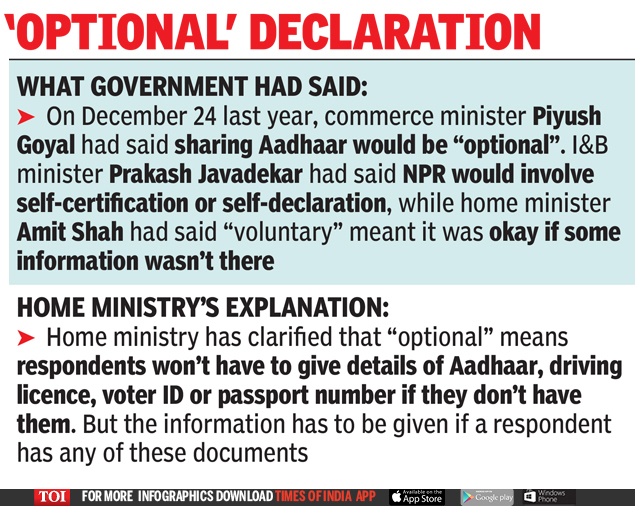 While announcing the Cabinet’s approval of funding for Census 2021 and NPR 2020 on December 24 last year, commerce minister Piyush Goyal had said sharing Aadhaar number during NPR would be “optional”. However, information & broadcasting minister Prakash Javadekar said NPR will involve self-certification or self-declaration while home minister Amit Shah said “voluntary” would mean it is okay if some information is not there. 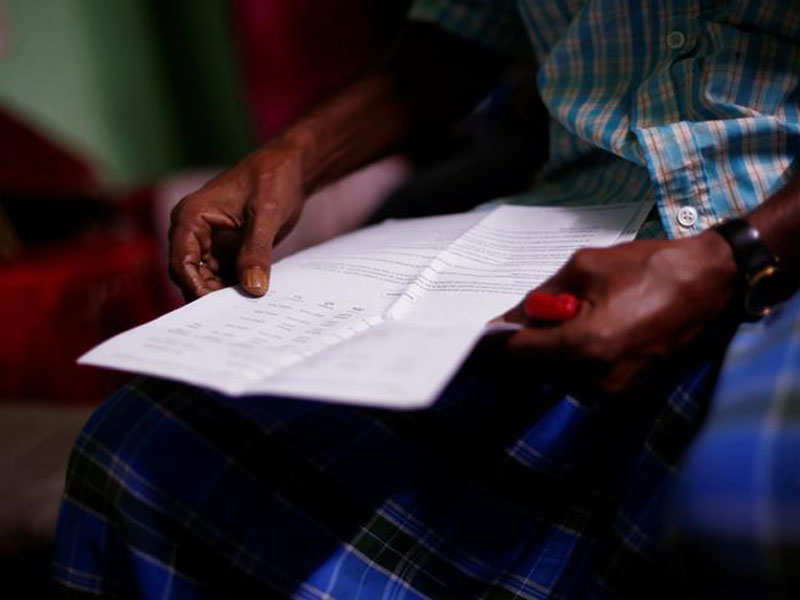 No documents will be asked or biometric taken for NPR, clarifies home ministry

Amid concerns expressed by opposition parties on the National Population Register (NPR), the home ministry has said no documents will be asked or biometric taken while updating the register. Officials said, “no papers will be asked” and “no biometrics will be taken” during the exercise. However, on the website, the NPR database will contain biometric details.

The official explanation on Wednesday cleared a prevailing impression that a respondent can choose not to provide information relating to the documents. While the effort will be to persuade respondents to provide information, explaining its utility, a rarely invoked provision entails a fine of up to Rs 1,000 on the head of the family for not sharing correct particulars of household members.

An official explained the legal implications of “optional” and “compulsory”, saying, “It is indeed optional as the fields can be left blank if you don’t possess Aadhaar number, passport, driving licence or voter ID. ‘Compulsory’ would mean that you would be required to procure these documents to enter the said details in the NPR form.”

According to sources, during the Census pre-test conducted last year, more than 80% respondents had willingly shared Aadhaar details. “The only field that got adverse response was PAN, which has been dropped,” said an officer.

During NPR updation in 2015, around 50 crore respondents had furnished Aadhaar details.

Rule 17 of the Citizenship Rules, 2003 does provide for a fine of up to Rs 1,000, though officials said the focus will be on getting the enumerator to motivate people to share the correct data by explaining how NPR data shapes development initiatives and ensures their inclusion as beneficiaries.

Even for Census, the provision of a fine of up to Rs 1,000 and jail up to three years for intentionally giving false answers has never been invoked. Instead, participation is ensured by the enumerator doubling up as motivator. “Most enumerators are local school teachers or government staff and are known to the respondents. The confidentiality clause relating to the Census data gives confidence to respondents to share correct details,” said an officer.

Asked if the NPR exercise would be affected by the opposition of some states, home ministry sources said the process had already been re-notified by all the states following the Centre’s 2019 notification. While the Registrar General of India has been informed of West Bengal and Kerala’s decision to put the NPR process on hold, an officer said the two states have not announced doing way with NPR.

“There is still time (for the states to review their positions). Meanwhile, training sessions for enumeration work are going on. The RGI wrote to the states two days ago asking them to intimate their respective 45-day schedule for the house-listing phase timed between April and September,” said the officer.

States may ultimately realise that opting out of NPR would put them at a disadvantage in terms of targeting of development and entitlement schemes, noted an officer.

Apart from Aadhaar etc, the 2020 NPR updation exercise will, for the first time, seek additional details such as date and place of birth of parents, place of last residence, mother tongue and mobile number.

An officer said the field relating to members of household availing banking services, dropped from the Census house-listing schedule, will show up in the enumeration schedule to be notified later.

This is the first time census and NPR data is being captured digitally via mobile applications. Enumerators capturing census, NPR and enumeration data on their mobile devices will be incentivised with a Rs 25,000 honorarium, as against Rs 5,500 being offered to those using paper forms.