MUMBAI: A total of 110 Indian passengers, all Dawoodi Bohra pilgrims headed to holy shrines in Iraq, were stopped by immigration officials at the Mumbai international airport from boarding a 2.30am Iraqi Airways flight to Najaf on Saturday. Five of them had already cleared immigration checks and the others were on their way to the immigration counters after having got their boarding passes when the incident took place.

Those who had cleared immigration were brought back from the boarding gates as airport officials asked the airline to stop issuing passes post-midnight, apparently after receiving instructions that travel to Iraq was “unsafe” for Indians.

Additional commissioner of police, special branch II, Supriya Patil-Yadav, told TOI, “An instruction from MHA said travelling to Iraq is unsafe. We had to stop the passengers from boarding the flight. With a fluid situation, safety of Indians is priority.”

However, immigration officials at Ahmedabad airport had stopped passengers from travelling to Iraq on Thursday, a day after the MEA notice. Passengers there were informed on phone and spared the ordeal of reaching the airport, while those from Mumbai said they had to wait at the airport until 4am to get their already checked-in luggage back. 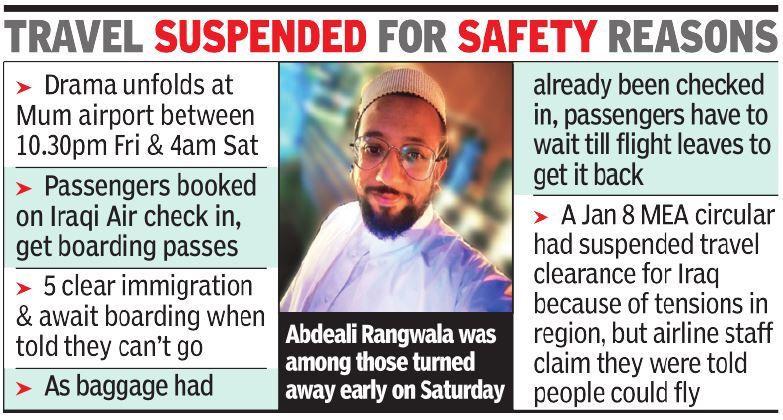 Families of those who got immigration cancellation stamps said they were worried questions might be raised in future at the time of obtaining security clearances, especially for travel to many Western countries.

An aviation industry source said immigration authorities have stopped all airlines going to Najaf and Karbala from taking Indian passengers.

Iraqi Airways Flight IA 442, which the pilgrims were to take, flies from Mumbai to Najaf twice a week (Tuesday and Saturday) and from Ahmedabad on Thursday and Sunday. Iraqi Airways alone operates between Mumbai and Najaf; half a dozen flights of other carriers to Iraq from Mumbai via Dubai and Sharjah have stopped flying to Najaf and Baghdad.

A senior official at Iraqi Airways said until 11.30pm on Friday, immigration officials kept saying they would clear passengers going to Iraq, so most passengers were issued boarding passes. “They kept talking to higher officials in Mumbai and Delhi and one senior officer told us to take an undertaking from passengers that they were travelling at their own risk. We got passengers to sign this undertaking. But then suddenly we were told they would not be allowed to travel,” said the airline official, requesting anonymity.

Some pilgrims who were apprehensive over the past few days about whether they would get to go at all said they were told by the airline that if they failed to report to the airport in time, they would not get a refund either. “My wife and I took a flight from Indore, where we live, to Mumbai to reach the airport in time, only to discover we were blocked,” said Abdeali Rangwala.

Abuzar Sakharwala, another passenger who, along with his wife, reached the airport at 10.30pm on Friday, said most passengers had checked in when they were informed of instructions from immigration officials not to proceed further. “We had to suffer so much because we were not informed in time,” Sakharwala said.