Under fire, the Girl from Mumbai says they mourn the ‘Free Cachemir’ badge. Mumbai News

MUMBAI: Facing the flak of several right-wing groups and activists for carrying a “Free Kashmir” banner at a protest near the India Gate, a woman from Mumbai claimed she was “destined for peace in Jammu & Kashmir,” and apologized for the misunderstanding she created here on Tuesday.

The poster was seen in his hand on Monday night during protests in Mumbai to condemn violence on the jawaharlal Nehru University campus two days ago, sparking a political controversy. 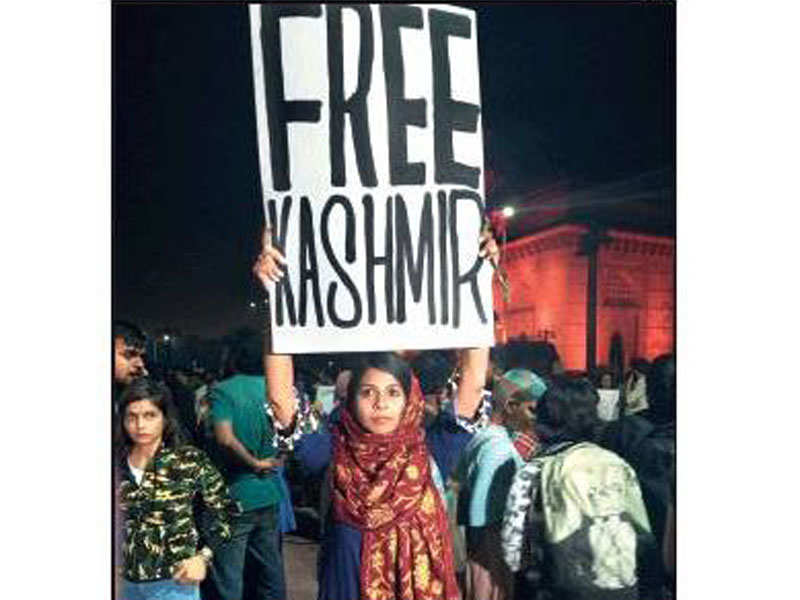 The image and video of a protester at the Indian Gate holding a sign that read “Free Cache” went viral Monday night, drawing sharp reactions from BJP and many others who claimed that protests in support of JNU had been infiltrated by those with other divisive agendas.

Opposition’s Bharatiya Janata Party (BJP) leader Devendra Fadnavis demanded to know exactly what the protest was about and why ‘Free Kashmir’ slogans were raised there.

‘How can we tolerate these separatist elements in Mumbai?’ The free Kashmir motto of the Azadi gang 2 kms from the COM? Uddhavji (Thackeray) will tolerate this anti-India ‘Free Kashmir’ campaign just below your nose???” Fadnavis tweeted on Tuesday.

Is the protest for what exactly? Why “Free Cache” slogans? How can we tolerate these separatist elements in Mumbai?… https://t.co/byvNGVxRm5

In response to BJP charges, Shiv Sena Rajya Sabha MP Sanjay Raut made it clear that he would not tolerate anyone talking about India’s freedom.

“I read that those who owned the ‘Free Cachelook’ sign clarified that they wanted to be free of restrictions on Internet services, mobile services and other issues. It doesn’t mean they’re plaking for India’s freedom,” Raut told the half-persons.

Nationalist Congress Party Minister Jayant Patil replied to Fadnavis that the “Free Cachemir” sign was intended for freedom from all restrictions and discrimination.

For her part, the woman was identified as Mehak Mirza Prabhu, a Mumbai-born who works as a “storyteller,” saying that although she had no agenda or motive, she was surprised by the social media reactions to the “Free Kashmir” poster she was carrying on Monday night.

“The image created by all social networks was an absolute shock to me. The billboard meant “freedom to express themselves, freedom from internet blocking that many people have been giving voice.” I was expressing my solidarity for the basic constitutional right. No other agenda or motive,” Prabhu said.

Reiterating that she was a Maharashtrian, born and raised in Mumbai, she said: “I am (a) artist who believes in basic human compassion. If being naive in understanding the impact it would have, and in the process creating this stir, I apologize.”

Prabhu urged everyone to let the “power of love overcome hate,” even as an activist lawyer from Mumbai, the BJP, Vivekan and Gupta, shot a message to the Police Commissioner demanding his arrest.